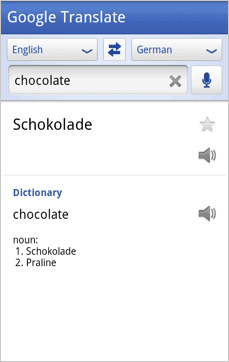 I’ve told you about Android Market being the fastest-growing app store a few days ago, now here’s some more interesting Android news. Google has announced that the Google Translate Android app just got a new face, as well as some new features, as the Google Mobile blog tells us. Let’s see what it’s all about.

Well, first of all, the app does have a new face, and it’s a cleaner one (or so it looks to me) which is the first thing I noticed after applying the update. The next thing I noticed was the drop-down boxes showing the languages have been improved, and the same can be said about the input box.  Still, the most interesting feature (even if it’s still in alpha stage) is Conversation Mode. Only available for English and Spanish at the moment, this feature allows you to have a voice conversation translated back and forth in real-time. When you’ve typed something in the input box, you will be able to press “Enter conversation mode” in the lower part of the interface. Then, if you press the microphone next to the respective language and speak into the phone, you should hear what you said translated into the other language.

For some reason, even if I installed the libraries I was prompted to install, this feature didn’t seem to work at the moment. Hopefully it will in the near future.

Even if it’s not a new thing anymore, I just love the SMS Translation feature, which allows you to pick a message from your phone and have it translated in seconds.

Have you tried it yet? What do you think about it?