I always love it when Google introduces new services, because I feel like a kid in a candy store playing with them. And when they end up being useful, all the better.

Recently the web giant introduced a few new search options at their Inside Search event.  Some new Mobile features were implemented, but the desktop search ones are the grooviest. 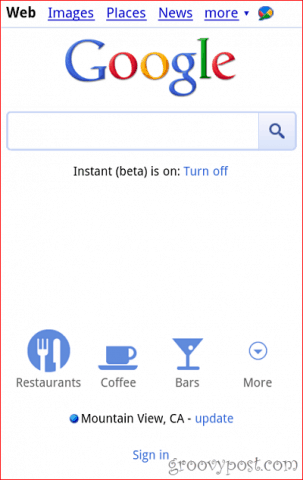 First of all, let’s talk about the new mobile search feature. Google is focusing in on local, and they’ve made the Google mobile search page more convenient. You now get shortcuts to Restaurants, Coffee Shops and Bars on the home page, allowing you to search for these locations faster. And if you click “More”, you get even more cool shortcuts for nearby stuff like Attractions, ATMs, Gas Stations, Fast Foods, Shops and everything else nearby.  Of course, this is done by getting your location from your phone’s GPS and tying it into the monstrous Google Maps database.  Very Groovy!

I’m sure there will be tons of people yelling that Google is trying to keep tabs on your location even more (wasnt Apple just caught doing this very thing?), but that’s bound to happen anyway, so you might as well make use of it. :)

Of all the new features, these are my favorite; two new desktop search features. First of all, we have the new Voice Search for desktop. This used to be a feature that was available for mobile users, probably aimed at making search easier for them.

Google has realized that it can be adapted to desktop and that many people will have moments when they won’t know the exact spelling of what they’re searching for or they’re too lazy to write down a huge query.

Now, this only works in Google Chrome, and it requires that you have a microphone (most laptops do anyway). You just click the microphone icon and speak away. It didn’t show up for me just yet, but Google tends to roll out new features to different areas at different times. 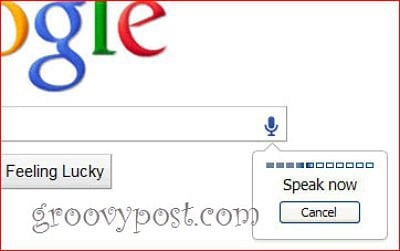 Now this one really rocks! (and it rocks in a figurative way; the Les Paul guitar feature rocked differently…) I’ve always needed something like this and I love the way it’s been implemented.

You can now search by images, meaning that you can just drag an image to the Google Image search tab, and the search engine will find details about what it represents. How many times did you see a building, not knowing what it was, and wanted to know more? Or an actor’s face? Or whatever else?

Now, you just drag the image (be it a file from your computer or an image off the web) there, and a drop box, similar to the one for Gmail attachments, will appear and you’ll get results in no time (just as you can see below).  Tineye better watch their back if Google develops this further!