Just like last year, Google is teaming up with different U.S. airlines to bring free WiFi internet to airports and on flights.  From November 20 through January 2, this deal is live and groovy baby!

Why do we need free in-flight WiFi?

I can hardly think of anything more boring than sitting at an airport waiting for your flight to arrive.  Oh wait, what about  sitting on a plane?  Squished in between a stranger or two and completely disconnected from the rest of the world, there isn’t much to do.  You’re really left with only a few options:

Most people will opt for the first option because they’ve brought their phone, laptop, book, favorite magazine, etc… But, using a laptop or phone without internet is a lot like swimming in a pool without water, dry and empty.  Not to mention for business persons in this modern era, the internet is a necessity.  Google is giving away free WiFi this year to make everyone’s Holiday traveling a little easier, support airlines who incorporated in-flight WiFi, and most of all – to promote Chrome.  Last year the free WiFi splash page was a huge Nexus One ad, we can only assume this year it will take you to the Google Chrome landing page.

Of course, if you want privacy you’re going to have to get creative but you have to stop those screen-watcher somehow right? 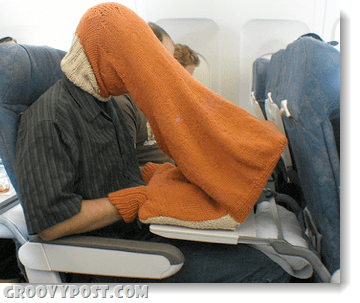 Where will there be free WiFi?

All flights on Virgin America, Delta, and AirTrain Airways will have free WiFi between November 20, 2010 and January 2, 2011.  Google has not mentioned anything regarding whether free WiFi will be offered airports this year but we aren’t too worried.  Between 3G, 4G, and tethering, internet access on the ground shouldn’t be a big issue.

Has anyone used the new Gogo in-flight WiFi service?  I’d be interested in hearing what kind of speeds people have experienced as well as if there were ever any periods of inactivity.