Today Google Docs added a new feature that is very reminiscent of Google Wave.  Discussions, which is a new and improved alternative for comments, is a social-conversation tool.  Discussions will display your Google profile pictures, add timestamps, and send you notifications when there is an update.  “We learned lessons from Wave and incorporated some of the ideas,” Google Enterprise product director, Mathew Glotzbach, stated. 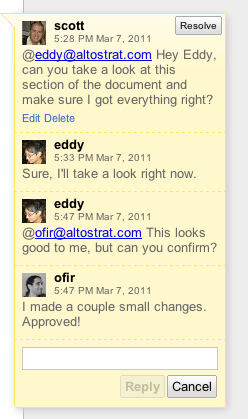 What you can do with discussions

There’s a lot of things discussions allows you to do, certainly more than the original document commenting system worked.
Here’s just a few things you can do with discussions:

Google released a demonstration video of a collaborative team using discussions, check it out below!