Are you a student in the market to buy a new computer?  If so, why not get some free stuff along with it.  Amazon is doing a new deal where if you purchase one of their selected laptops you’ll also receive a free Xbox 360 4GB console.  The promotion is live until September 3, 2011, so you do you some time to decide whether you want in or not.  Sound groovy?  Read on for the details…

How to get the free Xbox with purchase

More details and some buying advice

Amazon has a full list of computers that are eligible for the promotion.  But, not all of them are necessarily on the cheap side; the lowest one is $699.99.  Brands include: Toshiba, Dell, Lenovo, HP, Asus, and Acer.  Also, they have some desktop PC’s available, but none of them are a good price for the hardware you get so let’s stick to the laptops. 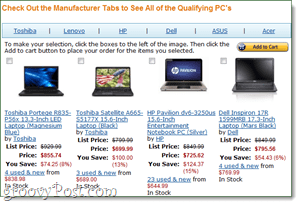 Of the PC’s available, a few are last year’s models.  With that said, if you are going for the lower range on the price scale, there are only 3 laptops worth looking at:

Of the 3, the Asus laptop is likely the best offer thanks to its discreet NVIDIA GPU with 1GB of vram;  whereas the other notebooks only include integrated Intel HD onboard graphic processing despite using the same i5 CPU.

There are some higher end options available in the $1100-$2000 range, but I wouldn’t spend that much just to get in on a free Xbox deal.  For the more expensive computers you are better off waiting for a real sale.  On the low end however, it is worth it.  Honestly, at $800 for a powerhouse laptop it is not a bad deal, especially when you throw in a free Xbox (that you can later sell on craigslist/ebay if you want).