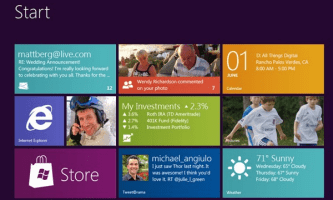 Microsoft has been more quiet than usual about their currently-in-development operating system, Windows 8.  Today that has changed!  While there still is much left unknown, they’ve unveiled a small bit of information that shows off its touch-screen capabilities.

The Windows 8 touch interface sports a Metro UI that is very similar to what you see in the Windows Phone 7, and an app market similar to the one offered by Apple.  But the really cool thing about Windows 8 is it appears to be two operating systems in one.  For mobile touch-screen devices you have the Metro UI touch interface, but for desktops and laptops you can switch over to the more traditional interface.  It’s important to note that the whole OS is being built from the ground up based on touch-interface, and will possibly see some integration with the Xbox Kinect.

Multi-tasking appears to work seamlessly as well.  You can switch between videos and apps without the video even stopping, or you can split screen your apps like you would on a desktop computer.  For typing there is a built-in software keyboard that also sports some amazing features, such as splitting being entirely splittable and resizable for larger screens.

Check out the official preview from Microsoft video below:

There is still a long road of development left ahead for the development team at Microsoft, but the general message is out there to Google and Apple: “Hey, we’re Microsoft and our mobile operating is enough to make you nervous.”