When we previously talked about your Privacy on Facebook, things didn’t look good.  Now Facebook is taking it down another notch.  With the current communication system on Facebook, you’ll receive app alerts through the red-flag notification button at the bottom-right of your page.  With a new update coming from Facebook, they instead plan to force developers to demand your email address.

Yup. You read it right.  Facebook apps will no longer be able to use notifications to communicate with you. They will have to request your email address and spam it instead.

Of course, Facebook reassures us that sharing your email address is entirely optional.  Also, the apps will first have to send you through several confirmation dialogs before you can confirm that you want to share it.  The real clincher here is that some apps will reject your access request unless you give them your email. 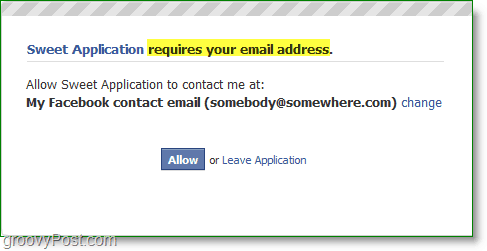 Is there a way around it?  Well, Facebook is aware of the potential spam problem as they have suggested users fake their email accounts saying: “users will still have the ability to choose to share a proxied email address instead.”   This move can be bad for developers who count on reliable communication with app users, however. This kind of defeats the purpose of the app requesting your email doesn’t it?

Notice also how on the screenshot below, your real email address is the default choice.  This default makes NOT using the proxy service very easy for many of the non-tech-savvy Facebook users.

The part which is most troubling is stated in the Facebook dev blog where it says:

This process means that even AFTER you’ve deactivated the app and deleted your Facebook account, the app developer will STILL have your email address.  Additionally, there is no longer a limit on the number of notifications an app can now send you.  Previously an app could only bother you x amount of times, but now they can email you as much as they like.

Facebook requires app developers to abide by the CAN-SPAM Act.  Let’s see how that works out with developers from countries outside of the United States, as there is no mention of this in the Facebook Developer Policy.