If you downloaded the previous Froyo update from Samsung for the Epic 4g, then you probably had your share of problems.  The last update was full of bugs, glitches, and application crashes.  Samsung now has fixed their mistakes, and the new update comes without the same baggage as the old one.  Sprint has started rolling out the new Froyo patch as of this week over-the-air only.

I already had the old buggy 2.2.1 update installed when my OTA update became available.  Because of this, my installation file was much smaller.  The new update rolls over your phone regardless of if you are running Eclair or Froyo, just as long as you don’t have any custom root jobs installed.

The update should automatically pop-up on your phone, with a prompt for you to install it.  If you haven’t seen this yet you can manually check, but your best bet is just to wait it out or call Sprint tech support (*2 on your phone). 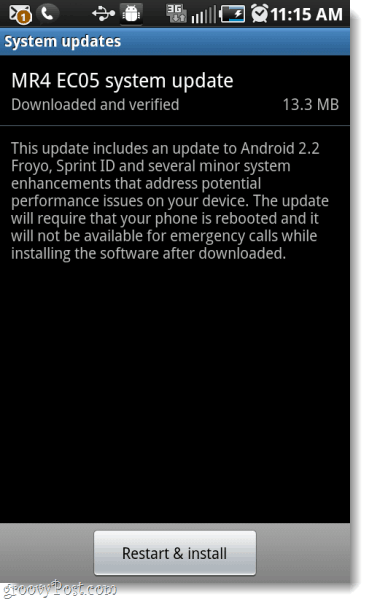 The new Froyo update titled MR4 ECO5, has fixed all of the problems I was having on my phone; which was primarily a broken video camera that recorded a low fps.  I’m quite happy with the results. However, this new update did install an app called Sprint ID that completely cleared out my homescreens and prevents customization of launchers.  The new Sprint ID is another horrid example of a carrier attempting to “brand” an open source phone while making it “idiot proof.”  As of right now, you can’t uninstall it without rooting your phone.