Today Google just released a new update for the built-in navigation app for Android phones and tablets, and it helps you avoid traffic jams.  The Navigation app does this by implementing real-time and historical traffic data then adjusting your directions to give you the fastest route possible. 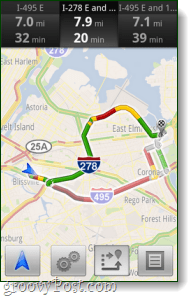 Along with traffic avoidance, Google Navigation is also set to offer multiple alternative routes, detours, and customization of said routes.  Want to avoid highways and only take back roads?  You can!  What if you don’t have a car?  Google navigation has a walking-mode that will give you directions while traveling on foot.

Google estimates that a total of a combined total of 35 million miles are driven by Navigation users on a daily basis, so this new feature should result in an interesting amount of time saved.  The update is available to Android owners in North America and Europe, given that traffic and map data is available in your specific area.