After adding an external drive to Xbox One to increase storage, you will want to start moving games and apps between drives. Here’s how to manage them.

Move Games and Other Items Between Drives

The first thing you want to do is get a sense of where you want to move data. To help manage content on each drive, head to Settings > System > Storage and there you’ll see the extra disk you added. Select either one and you will get a list of management actions such as viewing the disk’s content, renaming it, or setting it as the default drive to install new items. 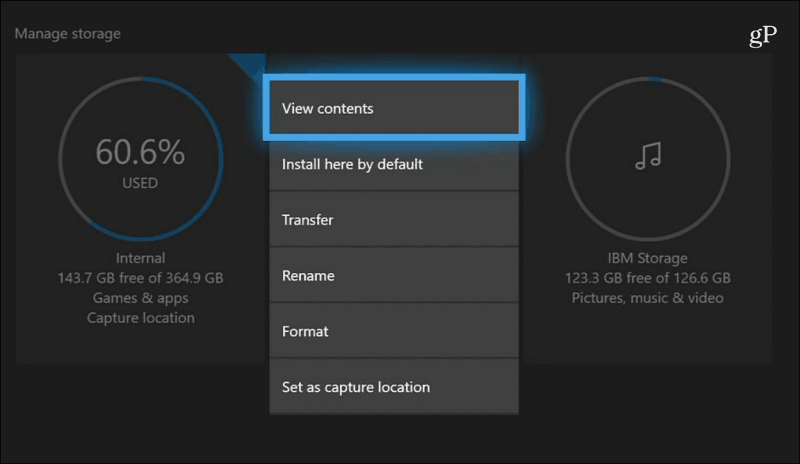 To move a game, head to My Games & Apps and highlight the game or app you want to move. Press the Menu button on the controller to bring up a list of different actions – select “Manage game” from the list. 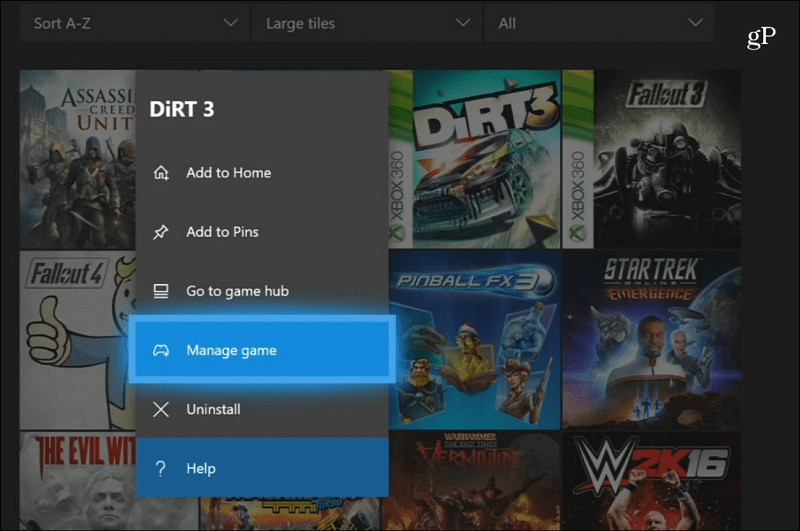 On the following screen select the “Move all” button. Then select the “Move” button on the verification message that pops up, and you will get a progress screen while the game is being moved between drives. In the example below, I am moving an Xbox 360 game from the internal drive to the external one I set up. 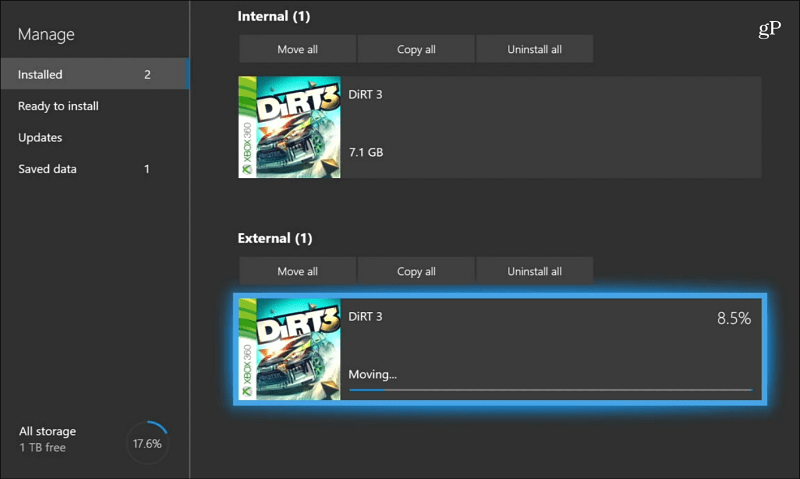 After you’ve moved a couple of games and you go to your Games & Apps list, you might be wondering where your games are. Well, the view defaults to the Internal drive. You just need to filter it to External and then select the game you want to play there. 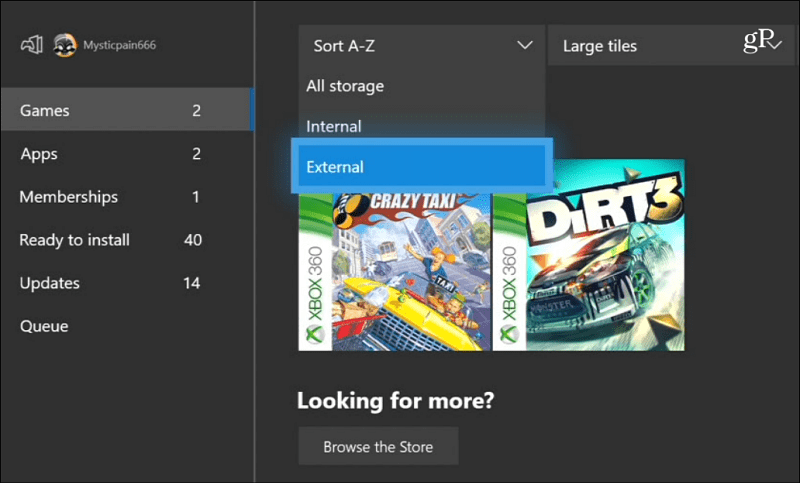 While the bigger drives are meant for storing the enormous Xbox One games, you still have a couple extra ports on the console you can use to manage media. For example, you can play music, videos, or display photos on the big screen from a flash drive. You can’t just plug in the drive and access its content. Similar to playing a DVD or Blu-ray, first, you need to install the appropriate app first. You need the Media Player app, and if you don’t already have it, Xbox will prompt you to install it first. 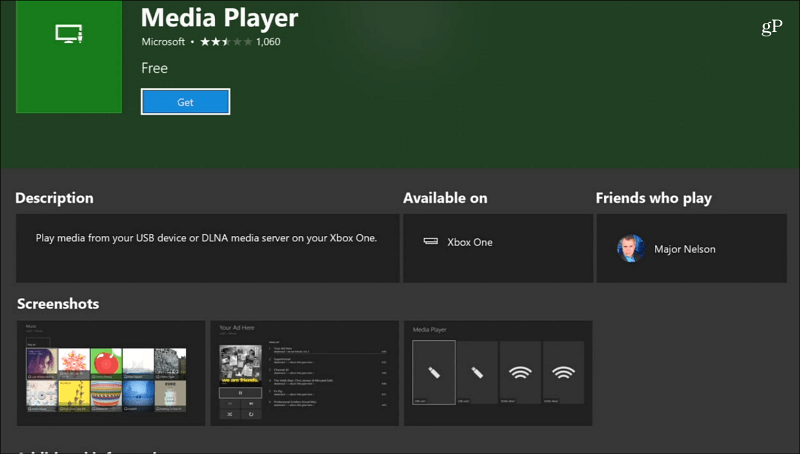 Pop a flash drive into a free USB port and open it from the storage manager to view the contents. 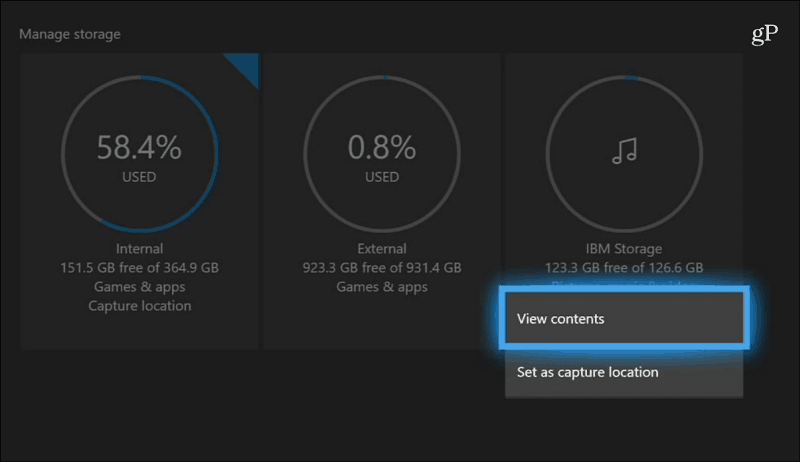 The Media Player app is free and can play dozens of different file types. If you are having an issue with Media Player displaying a media file, you might want to try another option like VLC for Xbox. 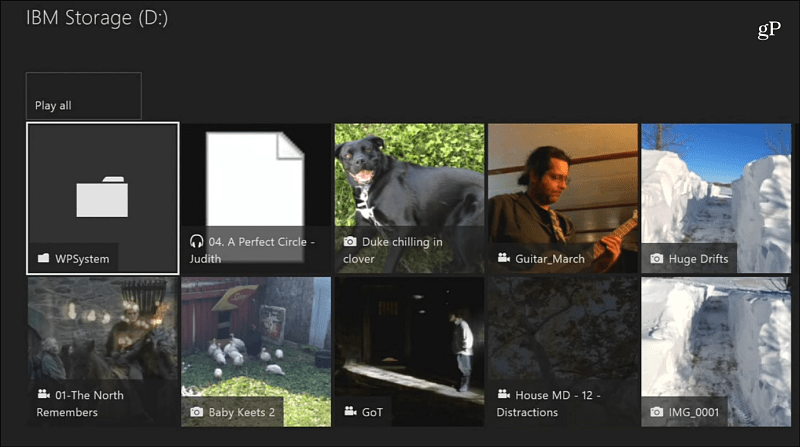 Have you added an external drive to create more storage space with your Xbox One or use a flash stick as a media drive? Let us know how things work for you in the comment section below.