Tonight I discovered Microsoft has released WSUS 3.0 SP2.  For most enterprise shops, this is a big deal since Windows Server Update Services (WSUS) is the primary method corporations use to Patch their Desktops (and sometimes servers).  It’s Free, simple to use, and very useful.  A low-level Systems Admin can use it (unlike SCCM) to easily keep all systems globally up to date with the latest Security and OS Patches.  With Windows 7 and Windows Server 2008 R2 recently being released, I knew this was coming “eventually.”

The released code can be installed either as a new install or an upgrade to WSUS 3.0 SP1.  The upgrade from WSUS 3.0 to WSUS 3.0 SP1 was VERY painless, so I decided to go ahead and upgrade my home WSUS server to SP2 skipping the testing I would usually go through.  This shortcut will be an excellent test before I look at upgrade work tmow.  :)

WSUS 3.0 SP2 delivers important customer-requested management, stability, and performance improvements. Some of the features and improvements include the following:

Ok.  Looks good.  Let’s get move forward with the upgrade:

The first and only issue I ran into during the install was the Installer complaining that I didn’t have the Microsoft Report Viewer Redistributable 2008 Installed – Download Link. 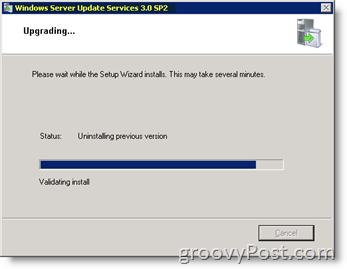 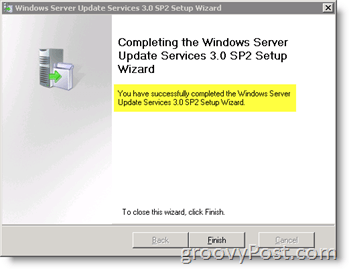 Following the initial install, go through the remainder of the install/upgrade by the WSUS Config. Wizard.  Settings such as Upstream Server, Proxy Server, and Patch Languages are configured here. 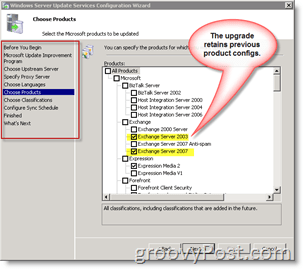 Once the install completed, I was pleasantly surprised to see that the upgrade truly was an in-place-upgrade.  After the upgrade I launched the WSUS Admin Console and found all prior patch approvals, servers, workstations, etc. were still intact just like I left them before the upgrade. 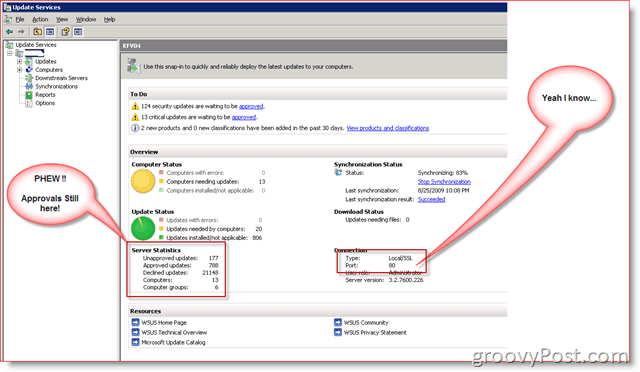 In regards to the Admin Console, looks like no significant or even noticeable changes to the GUI.  Everything was in the same place, no big changes.  As I dig in, I’ll post any additional findings.

All in all, Very Groovy Upgrade.  Well, worth the 30 minutes this evening!