Great news for all you groovyReaders who haven’t got a new PC yet this year.  Microsoft has just announced that they will be making Windows 7 XP mode available to more users.  To kick start this plan they’ve released an update which removes the requirement of hardware CPU virtualization to run XP mode on Windows 7.  If you do have a hardware virtualization capable machine, then XP mode will still utilize it and perform better than machines without it. However, for older PCs out there that don’t have Intel-VT or AMD-V capable processors, you’re no longer blocked from running the XP Virtual Machines on your Windows 7 machines!

The update is available on the Microsoft Virtual PC site.  You can pick it up directly from  http://www.microsoft.com/windows/virtual-pc/download.aspx

The update can be a little tricky to find since they put it next to the regular full download of XP mode.  You’ll need to select your operating system AND language and then you’ll see the new third option appear that links you to the XP mode update. 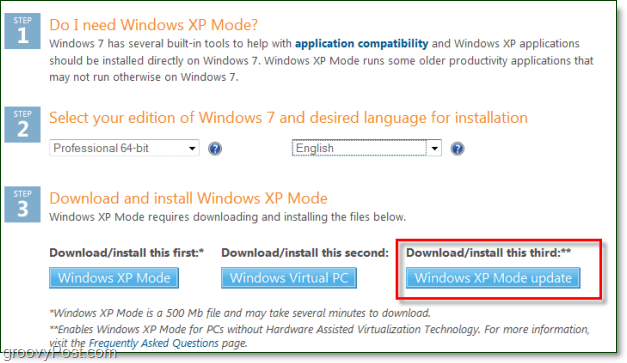 This update is pretty darn groovy, but they still haven’t made XP mode available to standard editions of Windows 7.  So if you want to run XP mode, you’ll need either Windows Professional, Enterprise or Ultimate edition.

Have you used Windows XP mode before?  Would love to hear your thoughts and experience below in the comments!