Kodu Game Lab, the free kid-friendly visual programming “language” designed by Microsoft, was released as a Technical Preview for the PC and Xbox 360.  Along with the Platform, Microsoft has also released several Training tools making it easy to get up and running to create great games.

You might remember seeing the game creator in action at the Kodu demo at CES 2009, during which Sparrow, a 12-year old girl, whooped Microsoft Entertainment and Devices honcho Robbie Bach at a game of her own creation. Early previews of Kodu have elicited numerous comparison’s to Sony’s LittleBigPlanet, which easily sets the bar for user-generated levels and communities. But Kodu’s origins and overall scope and purpose are a bit different from the highly customizable platformer for the Playstation 3.

For one, Kodu doesn’t come from a game developer—it comes straight out of Microsoft’s R&D department. They originally dreamt up Kodu as an engaging way to teach kids how to program. And in spite of the complete absence of keyboards, coding environments (and coding errors), and the more arduous facets of programming, it seems that Kodu is well-suited for the task.  The key is that it gets players thinking like computer programmers without actually sitting down and teaching them C++. 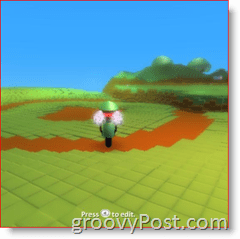 It does so by giving them complete reign over a free form environment that they can populate with a number of dynamic widgets, blocks, characters, and terrain types. Each element’s behavior is governed by a set of rules and events—the essential “if/then” conditions that make up the bread and butter of most programming languages. Actors in Kodu environments have a full range of sensory attributers—such as hearing and vision—as well as awareness of time intervals, collisions, and other factors. For example, you could set up a character to begin wandering around aimlessly when he hears a certain song until he runs into a tree and if the tree has been recently visited by a bird then eggs will fall out (can you tell I wouldn’t make a very good game designer?)

These rules, punched in via an extensive icon-based menu system, rivals the Cheesecake Factory’s in heft and volume. My guess is that it takes a while to get your bearings, but once you do, you can easily whiz through it as fast as Sparrow did in the CES demo.

In this way, Kodu seems a little bit less like LittleBigPlanet and a lot like Klik & Play from Maxis. In fact, this is precisely how I’d expect Klik & Play to evolve over the 16 years since it was first released. Kodu is also slated to have a robust community aspect via Planet Kodu, where game designers can share levels, rate them and invite others over to play.

Also, unlike LittleBigPlanet, Kodu is free for download (at least for now.) You can grab the Kodu Game Lab Technical Preview free of charge and install it right now (as long as your computer’s got the guts to run it—my netbook certainly doesn’t.) You can get your feet wet with the Kodu Getting Started videos and if you’re an educator, you can download the free Kodu Game Lab Classroom Kit, which includes a number of lesson plans and activities for teaching Kodu in the classroom.

So if you’re looking to play around with your kids and get them into programming at a young age, Kodu is probably a good choice!