Microsoft today has released some out of band cumulative updates for Windows 10 1803, 1709, and 1703 a week after its regular Patch Tuesday.

While Microsoft did release several updates for its regular Patch Tuesday last week, the company today is rolling out more improvements and fixes for Windows 10 1803 and earlier builds. The company is rolling out KB4345421 for Windows 10 1803 which includes some under the hood fixes and no new features. It will also bump your build number to 17134.167. Here is a look at what you can expect with today’s update for 1803.

Here is a look at what’s been improved and fixed for Windows 10 1803 in this update:

Unless you’ve disabled automatic updates, you should receive this update in the next couple days. But if you want to stay on top of things, you can check for the update by heading to Settings > Update & Security > Windows Update or manually download it here for Windows 10 and Server. After the update completes, hit the Windows Key and type: winver and hit Enter. You will see your build number has jumped to 17134.167. 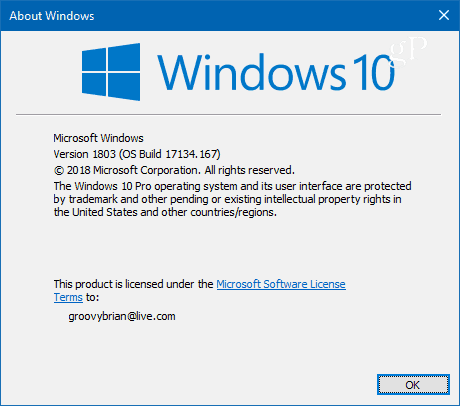