Microsoft’s Fluent Design System will continue to be an integral part of Windows 10 moving forward. But if you’re not a fan, you can manage some behaviors.

Windows 10 is a constantly evolving OS and part of the evolution is the Fluent Design System. Formerly codenamed Project Neon, it’s a new design language developed by Microsoft in 2017 and is rapidly becoming an integral part of Windows 10. Not only does it add the eye-candy you’d expect from a modern operating system, it affects how you interact with apps to get things done. In fact, the design language is starting to make its way to Office 365, too. However, some of its features aren’t for everyone. Here are a couple of tips on how to disable some of its notable features if you’re not a fan.

In updated versions of Windows 10, scrollbars are set to automatically hide when you’re not active with an open window. It’s an example of Conscious Controls that only appear when needed. When you move the mouse to the edge of a Window, there is a slight hesitation while the scrollbar appears. It does take some getting used to. And if you’re new to Windows 10, and used to a certain rhythm with your workflow, you might not be a fan. The cool thing is you can make the scrollbars always visible.

Head to Settings > Ease of Access > Display and scroll down to the “Simplify and personalize Windows” section and turn off the “Automatically hide scroll bars in Windows” switch. From now on, the scrollbars will always be visible even if you’re not engaged with a window. 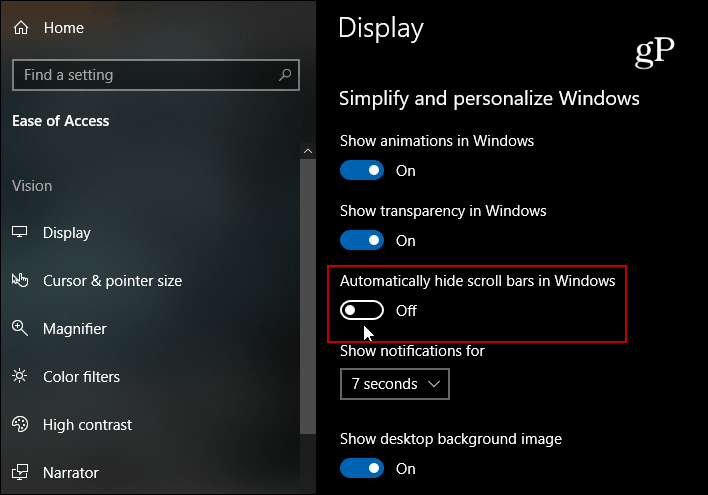 If you’re not a fan of the translucent or transparent effect that’s part of Fluent Design, you can turn it off. To do so, head to Settings > Personalization > Colors and scroll down a bit and under the “More options” section, where you can turn off the “Transparency effects” switch. Not only does this kill the translucent look for open windows, it turns off a lot of the Fluent Design experience everywhere. 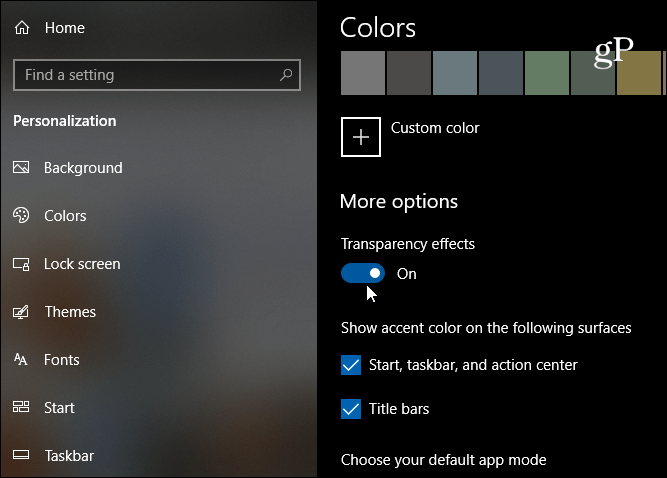 The new Fluent Design System will continue to evolve over time and include new features and abilities for Windows 10. When that happens, we’ll be sure to let you know about them. Again, not all the new Fluent Design improvements will make everyone happy. Luckily, starting with Windows 10 1803, Microsoft is giving users the ability to manage the behavior of some elements of the system. If you have a tip on using the new design, hop in our Windows 10 Forums for further discussions.