Microsoft launched Windows 8.1 via Windows Store on Thursday. If you have several machines to install it on, here’s how to install it from a flash drive.

Thanks to our readers, I’ve learned that this process won’t work using your Windows 8 key. Why Microsoft gives us the option to create an ISO of the 8.1 update but doesn’t allow the use of our existing Windows 8 key (it’s a free upgrade after all) I am not sure. Microsoft’s own page states:  “If you bought a Windows 8.1 or Windows 8 product key, you can download and install Windows from this page. You’ll have the option to install Windows now, later, or using media with an ISO file.”

One thing I was able to confirm is that using a Windows 8.1 key from TechNet or MSDN, the install goes off without a hitch. From what I’ve read, there are issues with this upgrade depending on the scenario, and this is definitely one of them. Hopefully, Microsoft will fix this issue. There are some workarounds you might want to try that our readers have pointed out in the comments below. I will continue to keep this post updated as we find out more.

The Windows 8.1 update was made available on Thursday this week, and for most Windows 8 users, the easiest way to install it is via the Windows Store. But if you have more than one system to update, it’s easier to create physical media to install it. This helps because you don’t have to worry about downloading a 3.5 GB file each time you update a different machine.

First head over to this Microsoft page and click the Install Windows 8.1. 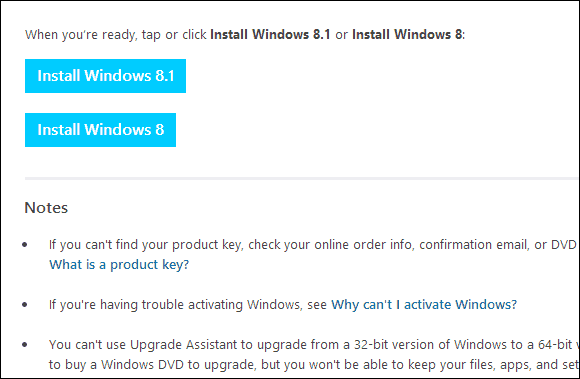 That downloads a small installer file that you run on your PC. After it downloads, simply run WindowsSetupBox.exe. Keep in mind that you’ll need Windows 8 running on the computer you’re installing the update on. 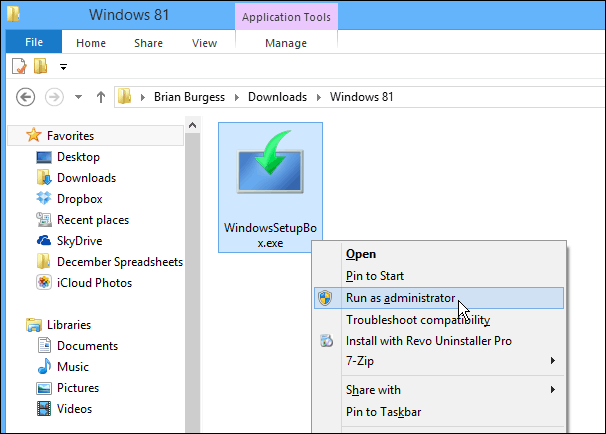 The Windows 8.1 Setup wizard will launch, and the first thing you need to do is type in your Product Key. 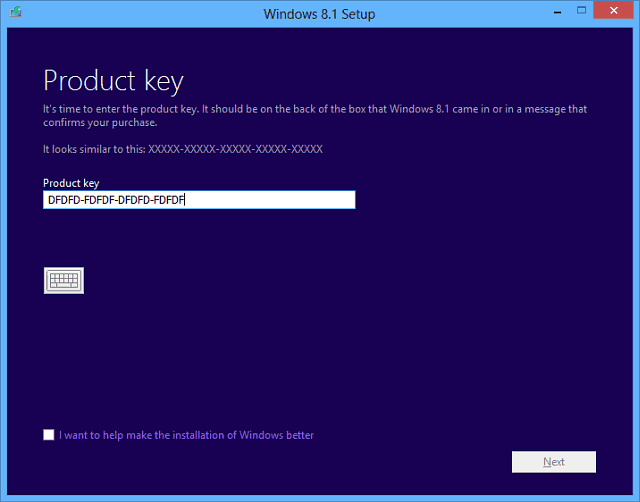 Now, wait while Windows 8.1 is downloaded. You can continue to use your system while it’s downloading in the background. 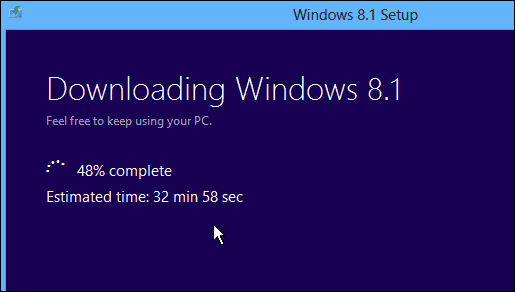 The next step will prompt you to decide if you want to install now, create media, or install later from your desktop. Select “Install by Creating Media” and hit Next. 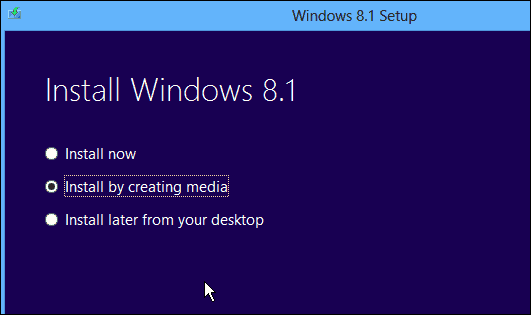 Now select the Media to use, in this example I am going with USB flash drive. Make sure you have a flash drive of 4 GB or more. 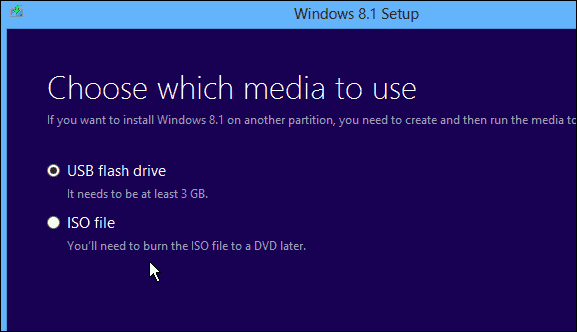 Select the USB flash drive you want to use and click Next. 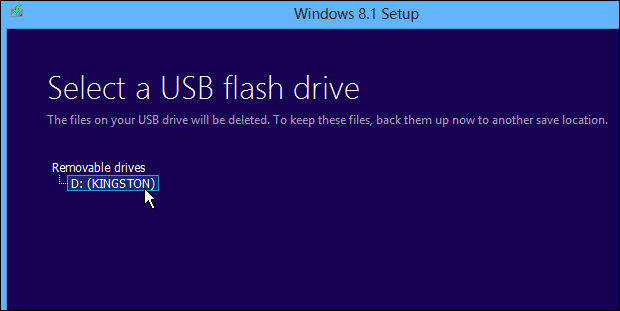 Next, you’ll get a message to confirm that all files on the flash drive will be deleted. Click Yes.

Now, wait while the flash drive installer is created. 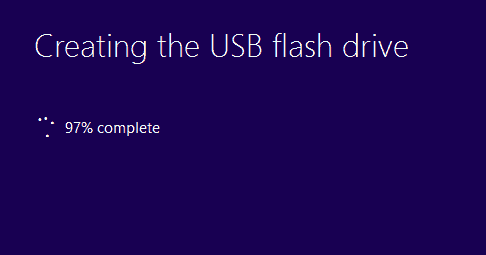 Success! The USB flash drive installer for Windows 8.1 has been created. Click Finish to close out of the wizard. You can use this to update other Windows 8 systems to 8.1 or install it on another partition if you plan to dual boot. 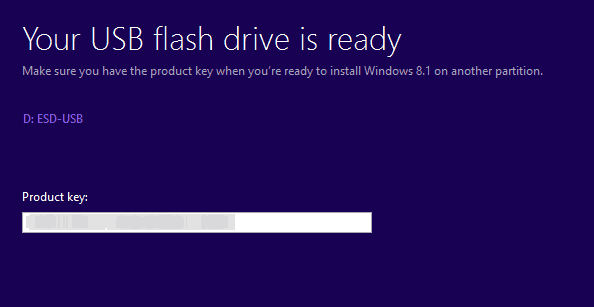 Insert the USB flash drive you just created on a Windows 8 system and launch setup.exe. 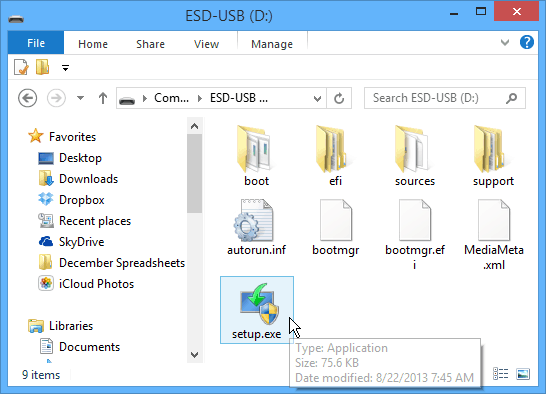 When the setup wizard starts you’ll have the option to get important updates during the install – I recommend using that option so the installation goes smoother. 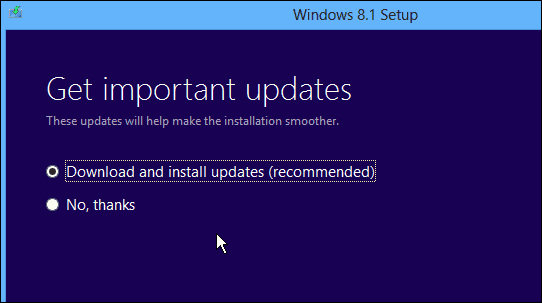 Next, you’ll need to agree to the EULA or License Terms. 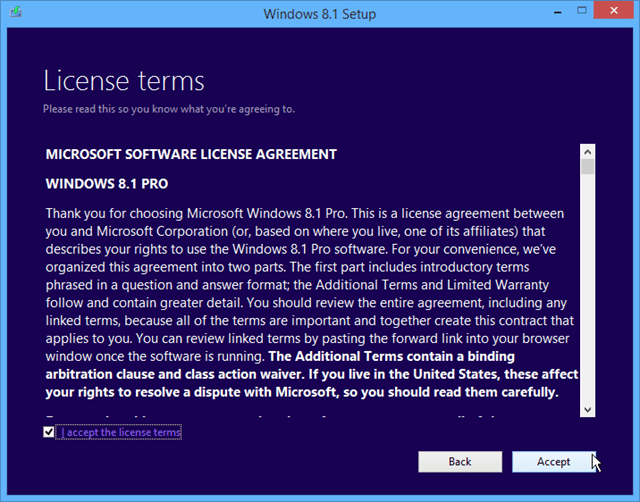 Then follow the onscreen instructions to complete the installation of Windows 8.1. If you want this to be a seamless update, tick the option to keep your settings, personal files, and apps. 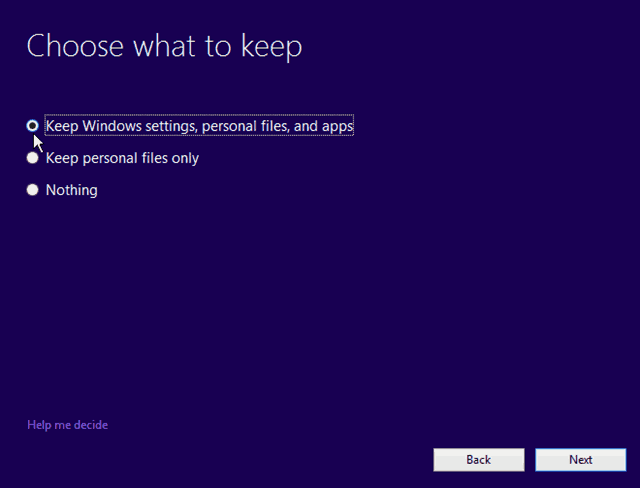 When going from Windows 8 to 8.1, you can keep all of your settings and apps. Remember, if you want to upgrade from the 8.1 Preview to the final version, you’ll lose all of your apps and desktop programs — for what reason, only Microsoft knows. When installing from the Preview though, all of your modern app tiles will display, with a download arrow. So, you just need to go through and click each tile of the modern app you want to get back.

If you don’t want to create a flash drive from this wizard, at the beginning select to download the ISO file. Then you can burn it to DVD or make a USB flash drive later by following this article.

The update process got off to a rough start yesterday, so you might want to hold off updating for a few days. Just like when Apple gets a new iOS update, downloading it to your device is a long arduous process because everyone is nailing the servers at once.

There are several other upgrade paths you can take to Windows 8.1 from XP SP3, Vista, and Windows 7. I will be running tests for each of these scenarios, so make sure to check back here often.