This post may be a bit more nostalgic than useful, but it does answer a question that I’m sure that many new computer users have wondered at one time or another.  When you buy a brand new PC, you’ll notice that C:, your primary disk drive, is always the first letter listed under your Computer.  Your DVD/Blu-Ray is probably next, as D:, and then following that are any peripherals you add such as external drives or memory slots.  Yet, the letters A: and B: are never used.  Let’s look at why!

What was in the A & B drive and what happened to them?

Some computers may still have these, but back in the day, the A: and B: drive were reserved for use as Floppy Disk Drives.  The reason you might not have heard of these drives is because all big computer fabricators generally stopped including them on personal computers in 2003, with the earlier being Apple who began disregarding the drives in 1998 on their iMac computers.

It was common to have two drives, hence why A & B are reserved.  This is because of drive incompatibility, there wasn’t a set standard at the time and so you had to be prepared to read media that was formatted differently.

Why did we use floppy drives?

Well, floppy drives are necessary to read our floppy disks of course!  Before Blu-Ray there was the DVD (Digital Video Disc) there before that there was the CD (Compact Disc).  As you know as each new media format was released, we are able to fit more information onto each one.  The floppy disk is the predecessor of the CD, and it sure didn’t hold much.  Floppy drives started out large in size as well, the first ones available in 1971 were a whopping 8 inches in diameter with a total storage capacity of 175KB.  To put that into perspective, 175KB is about 10 seconds of your favorite MP3 song.  Yeah not much, but at the time it was a big deal! As years passed technology improved and the standard moved down 5¼-inch size disks that could hold more especially if you notched the side of the disk so you could flip it over!

Thanks mostly to IBM, by the early 90’s the new standard became 3½-inch disks that could hold a sizeable 1.44MB!  But, by the time the 90’s rolled around the CD was already gaining popularity in the music industry, and computer geeks caught on and started using it to store data as well.  By 1996 CDs completely took over and the only people still using floppys were power users and system admins (however I still have good ole Ghost on mine!). 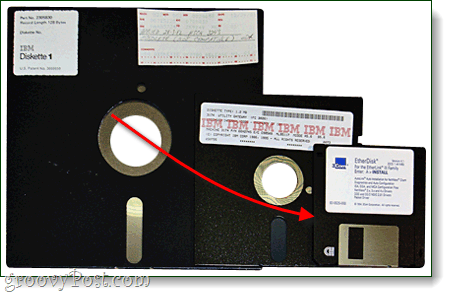 If nobody uses floppy drives anymore, why not use A: and B: drives again?

Even though few people still even have floppy drives, C:\ has always been the traditional installation drive of Windows.  Having these drives open also provides support for users that might still need to make use of floppy drives for managing older systems or drivers.  But, if you’re alphabetically agitated by this, Microsoft made it so that you can remap your drives and make A: your new C:.  Just follow our groovy tutorial for changing drive letters in Windows 7 and Vista.

So, now you know your A:b:c:’s…  Wow writing all of this sure makes me feel like an old geek.  Anyone else feel the same?

Editors Note: Yes… especially since I have about 200 floppy disks sitting right behind me which I refuse to throw away despite my wife always trying to slip them into the trash!!!