When you are on the go and you need a quick solution to a math problem, or just a quick conversion between units, Google has a built-in calculator feature that seemingly knows the answer to everything.  Google’s calculated results will work on mobile, desktop, and even tablet web browsers, hence the Universal title of this article.  Previously we took a look at just converting currency using Google and tracking UPS and FedEx packages using Google.  Today I thought I’d explore some of the other groovy things you can do with Google Search!

Just about any ISP out there likes to advertise in Mbps (Megabits per second). We talked about why they do this in more detail in a previous post.  Anyhow, now you can figure out exactly how long it will take for you to download a certain sized file at any speed.  Keep in mind when dealing with most networking equipment and services, you can only realistically expect about 75% of the advertised speed, hence why I added the /.75 modifier to the end of the example shot below.

Note: This type of search is case-sensitive! Be sure to capitalize the appropriate letters!

Just for fun, here’s how long a 4GB (typical size for a DVD movie) would take to transfer on Intel’s new Lightingbolt technology.

I really enjoy trying out authentic foreign recipes, but the problem is that most of them list ingredients in measurements that I don’t understand.  Google’s calculator function has this covered.  You can covert nearly any unit into another, all you have to do is Type it into Google Search with the proper way.

Use to or in as your connector, and generally just type a search with the following syntax:

One of my favorite uses for the Google calendar is math.  Sure, everyone knows that Google can handle basic math; 1+1=2 and 612×324=198,288 and etc… Google calculator can also handle advanced math, and xnumber.com is evidence of just that.  The calculator enthusiast James Redin has developed a working user interface that is powered by Google’s calculator results and JavaScript. 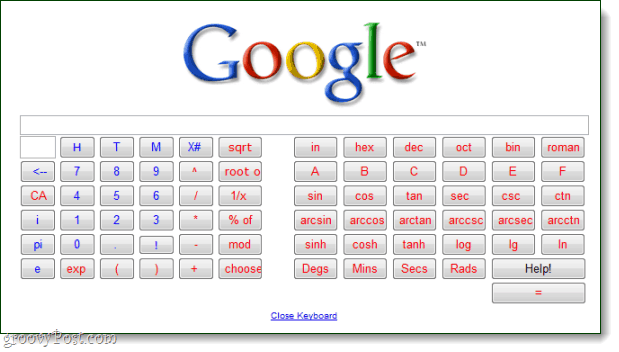 Figuring out the time difference between your location and somewhere else in the world can be complicated, but not for Google.  Type time followed by a country name and Google will give you the current time for that location.

If you’d like to see time in a 24-hour format just use a Google domain for a country whose Standard is a 24-hour clock!  Pretty much anywhere in Europe will work, in the example below I used www.google.co.uk.

Google as a Dictionary

I use this quite frequently while writing out groovy posts.  When you’d like to see the definition of a word, just Type Define: followed by the word in question.  Google will display not just one definition, but multiple sources and multiple meanings of the word according to various websites. 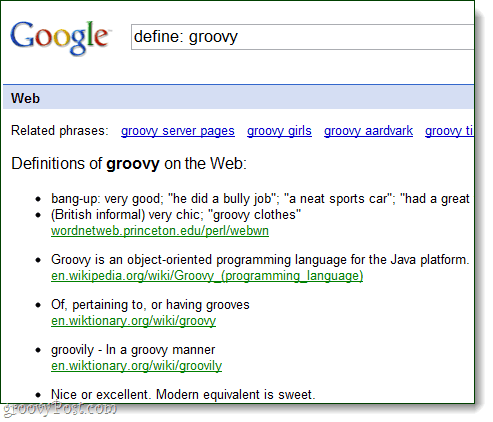 Are you waiting on a flight, or checking on someone else’s?  Just type in the airline followed by the flight number.

Google has a lot more features to offer, though the rest of them aren’t really “calculator’esque” enough to make this post any longer. See the full list on Google’s official page.

How do you use Google as a calculator?  We’d love to hear any tips and tricks we forgot to mention!