Before World or Warcraft (WOW) and even before Dark Age of Camelot (DAOC), the MMORPG (Massive Multi-player Online Role-playing Games) that started it all was called Ultima Online or if you’re an old-schooler like me you will refer to it as simply UO.

UO was a spin-off of the popular Ultima series which took the world and the adventure to all new heights in 1997 – ONLINE.  As an online game, UO was vary addictive as I can personally attest to.  The main draw of the game back then was its simplicity AND complexity all in one.  You could be anything from a Famous Warrior, Wizard, Treasure Hunter or even a Grand Master Weapons Smith.  If battle wasn’t your thing, you could become a famous Baker, Fisher, Merchant or even a musician who supplied goods through your store to those who liked to adventure.  And when you’ve saved up enough coins to splurge a bit, you can even build yourself a House, Stone Keep or even a Castle!.

Like I said, almost anything was possible in the land of UO which is probably why for many years, it was king of hill with over 100,000 addicted players.  For some, the game actually still IS king of the hill but I’ll get to that in just a minute.

How do you play UO? 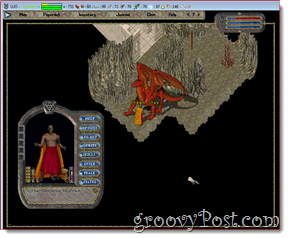 Starting off with a new account you basically have no skills, little weapons and few options.  This is my favorite part of the game, starting out with nothing and building up a powerful character!  That being said, the first time you build a character, things can be a bit daunting.Most people will begin by killing rabbits or rats with the dagger they inherit when starting the game.  Once you kill the little guy, use your knife to skin the animal then sell the food and pelt to a merchant in the town so they can save up to buy a better weapon.  The more rabbits you kill with your starter dagger, the better you will become at the skill (fencing) because in UO, as you continually use a skill, you will get better and better at that skill (0-100) and once you hit 100, you will become a grand master in that particular skill.  Now granted, you can’t just kill rabbits to reach 100 in swordsmanship, archery or Margery but, you get the point.

As you progress in the world of UO, other opportunities will open up to you like fighting in a group and exploring deep dungeons and killing giant monsters.  The game also has a justice system so if you’re a good warrior or wizard, why not become a bounty hunter and track down players who have chosen a life of crime?

It’s really hard to explain the game without showing you so lets move on so you can jump in and give it try for yourself!

How to Set Up Ultima Online and Play for Free

Sometimes a company doesn’t realize a good thing when they’ve created it…  At least that was the case with UO.  At its height, the developers kept messing with the laws of the game and kept adding expansions trying to suck every last dollar out of the 100,000+ subscribers.  Unfortunately this, plus the launch of several competing games like Dark Age of Camelot, was the undoing of the game.  Those who were playing got tired of all the changes and most fled the game and went over to Dark Age or Everquest.  The good news however is a few decided to remake the game and make it available for free for anyone who wants to host it or play it.

Although there are many, many free UO servers out there, you will normally find me sitting on one of a few servers where I call home (in-game…).  The first and favorite is UOSecondAge.com.  UOSA is frozen back in the glory days of UO before the game was screwed up.  The server always has several hundred players which is a requirement because nothing is worse (for me) than being alone in a world that’s meant for real person interaction.  The next server I recommend is http://inporylem.com as it is very similar to UOSA in that the code is frozen to the glory days.

ABCUO.com is the normally the second spot you can find me.  The DEV’s who keep that server up and running try to keep it current with the real UO servers being ran by EA.  It will include all the new skills, ships, creatures etc…  They have also changed a lot of rules on that box however if you just want to jump in and have fun quickly, ABCUO is a great server.

Now, before you can do all that, you need to install the client software and get all setup.  Let’s do that now!

Each of the servers I play on have specific instructions for how-to download and login to the game using their servers.  Don’t worry about messing things up on your computer.  Setup is usually very simple and worse case, you can always just uninstall everything and start over.

My recommendation is to follow the install instructions here on UOSecondAge.com.  That being said, you can also just install the Client from the real EA servers however be sure not to run the Patch Client on UOSecondAge or Inproyelm.

After you install the UO Client, you need to grab a copy of Razor which you will use to connect to the correct server each time you play.

Download and Install Razor. Razor adds a ton of functionality to the game that you otherwise wouldn’t have plus you need it if you want to jump around between servers. 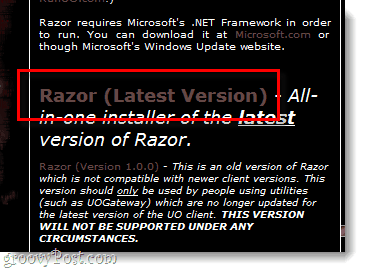 With all the components installed, it’s time to launch the game.  Set up the Razor shortcut to always run as an administrator then launch it.  This is an important step otherwise special keys you set in Razor will not be saved.

From there you need to type in the Server Address and PORT for the server you want to join.  Here are the different server addresses I use to play:

Here is an example of my Razor config.  Notice I changed the Server and Port to match #1 above. 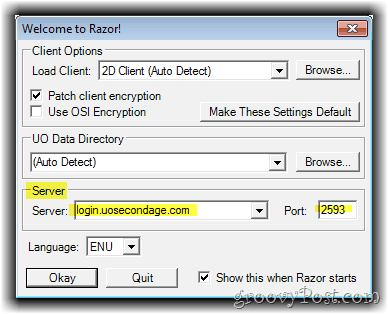 Step 4 – Login and create a character

At the login screen, just choose an account name and password.  Be sure not to lose this password as it will be difficult if not impossible to get it back it!  There’s nothing like spending 6 months building a character only to lose access to it! 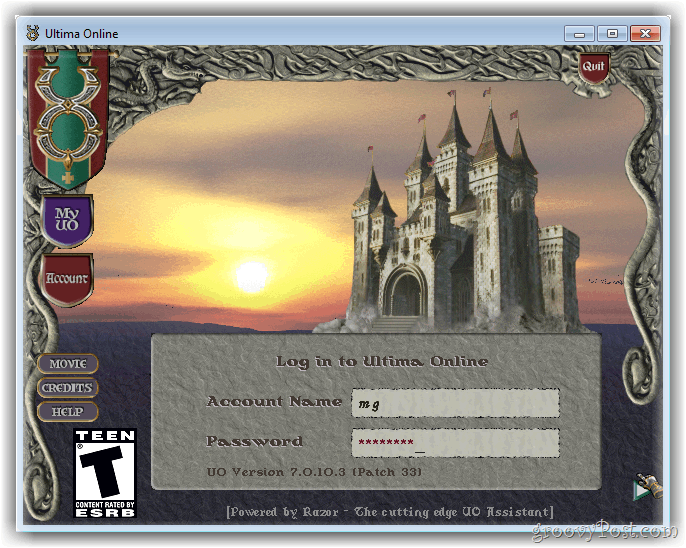 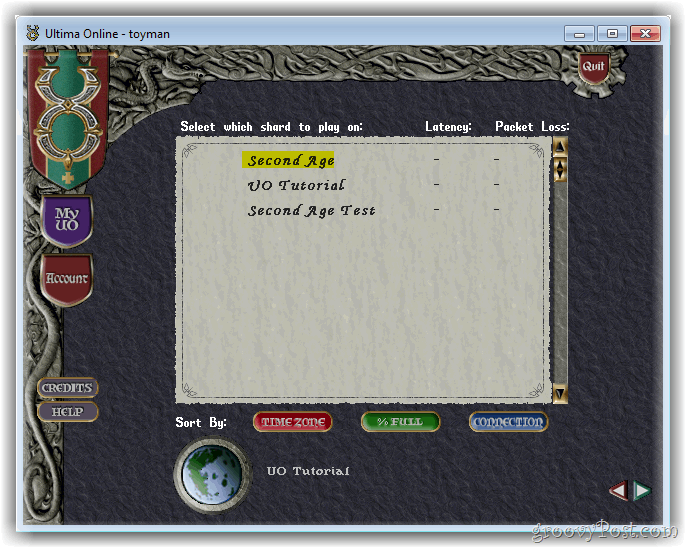 Name and dress your new character.  Be sure to use HUMAN as the race.  BTW – Male/Female, it makes no matter in this game.  Neither is stronger or smarter than the other (no comments please). 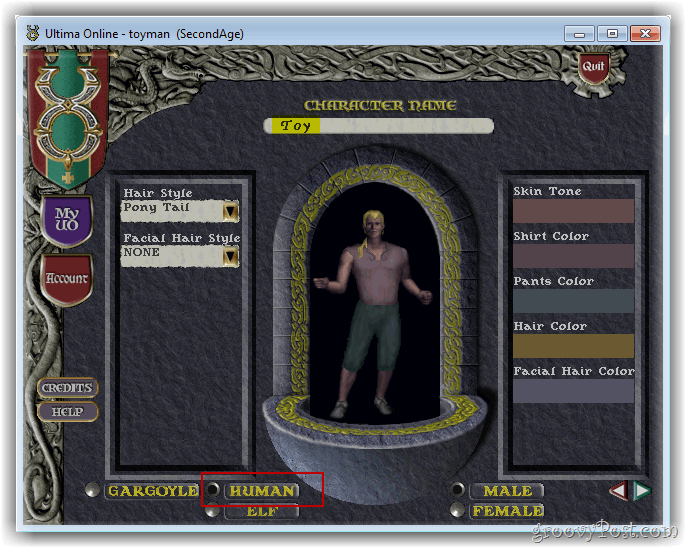 Pick your class.  My recommendation for your first character is to pick a Warrior as they are the easiest to get money in the beginning of the game.  One thing to note, each account can have 5 characters so once you get established in the game, just create a new character like a Mage or Blacksmith as these are very fun to play BUT, very expensive if your just starting out. 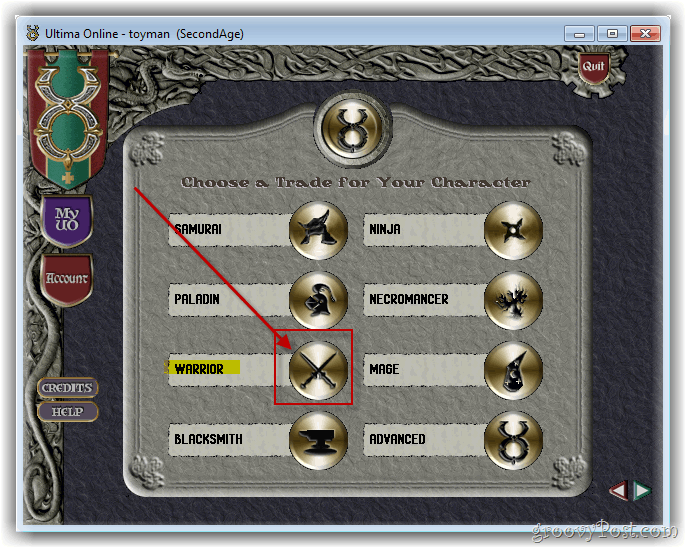 Save the account with an email address then run around and try to kill stuff. 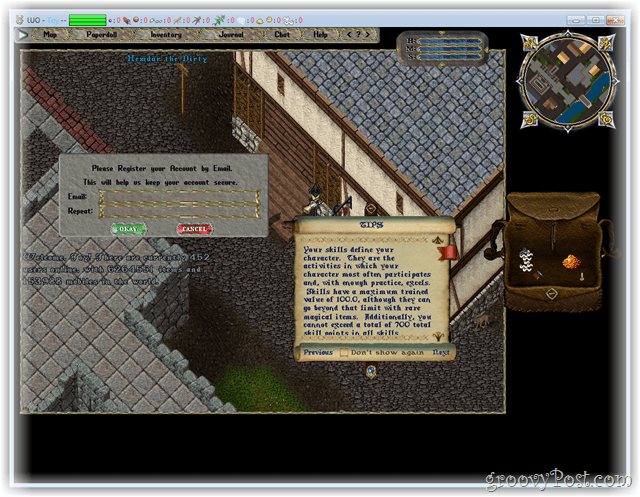 As you can see, the graphics are the same as they were back in 1997.  Although at first you might be a little put-off, I think it actually adds to the game by keeping the game play simple yet overall game super complex.  For example, unlike WOW or DAOC, a highly skilled player can take on 1-3 other players at the same time.  This is close to impossible in other online MMORPG’s.

I could ramble on and on about the basics for the game but since most of this is already written, I’ll just point instead:

Good luck out there, and may the force be w… err wrong genre.  Have a groovy weekend!  If you get stuck or need some help, just drop me a comment or shoot me an email!