Although few will argue that an email is an invaluable tool for most organizations, more and more studies show that too much email can cause serious productivity issues for its employees. For instance, remember that document you were assigned to write, but it took three times longer than you expected because each time you focused on it, a new email would arrive in your inbox. Rather than ignore it, you felt compelled to respond. And ten minutes are gone.

For me, this happens every five minutes at my desk (which is why this article took three hours to write), and I wouldn’t be surprised if 99% of you out there have a similar story. That’s why I was excited when Microsoft released a new Outlook 2007 Plug-in called: Email Prioritizer.

Microsoft Outlook Email Prioritizer is a Freeware download from Microsoft’s new OfficeLabs <at least it was when I wrote this article>.

Tired of email overload? Email Prioritizer is designed to help you manage email overload with a “do not disturb” feature and email ranking. Works with Outlook 2007 running on Exchange server.

The install was fast and easy: 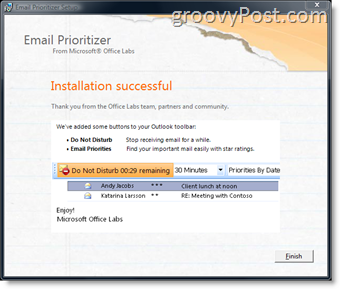 The first time you Launch Outlook after installing the new Add-On, be prepared to wait a few minutes while it scans through your email and assigns the various priorities. 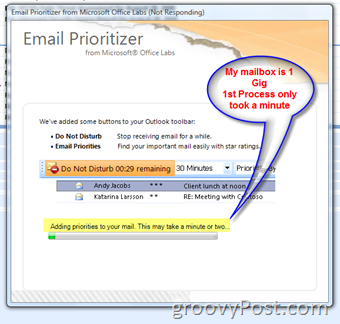 Once Outlook opens after the install, you will notice a new toolbar at the top of your Microsoft Outlook 2007 Client. The settings are pretty straightforward.  You can configure the “Do Not Disturb” setting in 30-minute intervals up to four hours or until the meeting you’re currently in concludes (as scheduled in your Outlook Calendar.)

Additionally, you can also configure how your Inbox displays emails based on the Priorities assigned to the emails from the toolbar.

You can either accept the default “Priority Rules” or customize them to your preferences by clicking the Options button in the New Email Prioritizer Toolbar.

Once here, it’s pretty straightforward.  Adjust the settings and click OK to save. 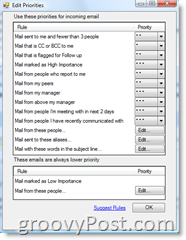 I’ve been using the Plug-In at work for a few days now.  So far, so good.  I use a different method for prioritizing my inbox but, the “Do Not Disturb” feature has already had a very positive impact on my Email Reading/DeskTime habits.

This morning I was prompted by an Auto-Update Tool to upgrade the Microsoft Email Prioritizer from V1.0.818.0 to 1.0.820.0.  The notes mention the update is for users who do not have  connections to Exchange Servers: 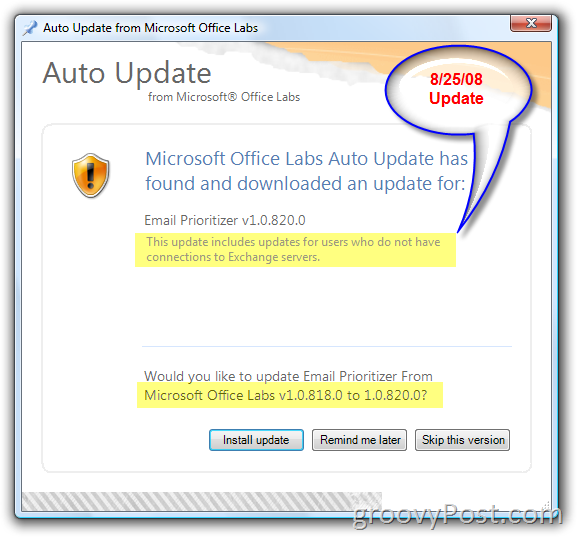