Sleep and hibernate are both low-power states for your laptop. But which is better?

Frequently I’ve been receiving a lot of questions from groovy readers asking:

“What is the difference between Sleep and Hibernate mode and which is better?”

Previously we covered the hiberfil.sys file which explained somewhat, but in this article we are going to tackle it to a further degree.

Sleep (aka Suspend on Linux) is a low power use state where the computer enters a “suspended animation.” Putting your computer into sleep mode will allow you to pause all of your current work and seemingly shut down for fast recovery later. Because the computer never completely powers off, the battery or just electricity, in general, is still used while in Sleep mode. Some systems that support a hybrid sleep will save current data to the hard disk in a temporary file, while others will store it in the computer’s physical RAM. Typically sleep will resume your computer in a matter of seconds. Compare that to the minutes it can take to return from a cold shutdown. Most computers in sleep mode using 5W-10W of energy per hour – that’s about half as much as most “Energy Efficient” light bulbs.

Hibernate is another low power use state that allows you to shut down without losing work. Hibernate functions by saving all of your currently opened data to your hard disk and then shutting off all components. Before shutting off in Windows machines, Hibernate saves your data to hiberfil.sys, which can be a rather large file with a size of several GB. Hibernation tends to mimic the time that shutdown takes to resume your system.  An article from the Microsoft Small Business Center even promotes using Hibernate at all times in place of Shutdown, unless you won’t be using the computer for an extended period. Hibernate uses 2W of power per hour or less, depending on what type of system you have.

Which is better, Sleep or Hibernate?

Both sleep and hibernate are good choices. Which is best honestly depends on your particular system and circumstances. Sleep mode uses a slight amount of power, but it is still significantly more than Hibernate the more time that passes. On the other hand, although Hibernate might seem like the lowest power option, it can make a difference if you are only resting the computer for short durations.

Most computers use a significant amount of power to start up from a full shutdown or hibernate, whereas sleep mode is already booted up and ready to go. If you plan on only resting the computer for a short period of time, use Sleep. Save Hibernate mode for when you want a decent speed boot-up, but plan on leaving the system off for an extended period, such as before bed. A good rule of thumb, however, is when in doubt, use Sleep. Sleep is a better option than just leaving the PC turned on, and if you think you might need to jump back on it, your system will start almost instantly.

Thanks to this groovy chart from LifeHacker, we can get a nice visual on just how much power Sleep mode uses compared to Shutdown/Hibernate. 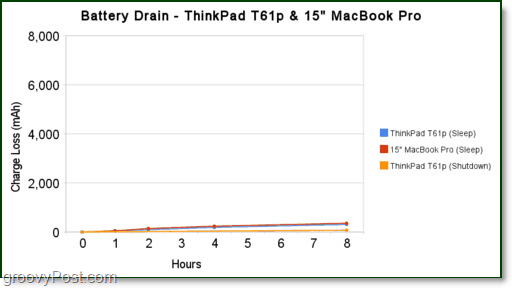 Thoughts, Questions?  Drop a comment below or join the discussion in the free groovyPost technical support community!