Siri Shortcuts should bring some order to your life and make you love your Apple devices even more.

One of the best features of iOS and iPadOS is Siri Shortcuts. First introduced with iOS 12 in 2018, the tool allows you to perform everyday tasks (or a series of functions) on iPhone or iPad with your voice or a simple tap.

Siri Shortcuts have been designed for beginners and experienced workflow creators alike. For the former, Apple offers hundreds of pre-made curated shortcuts in the free official app. It’s from here, you can also create shortcuts from scratch, although that’s not the focus of this article.

There are hundreds of Siri Shortcuts ready to use, including our favorites listed below.

Each shortcut includes a specific task or multiple actions that get automatically combined into one job. Not all shortcuts have been designed for manual triggering using a voice or a tap. Instead, these shortcuts start automatically based on location, time of day, or other circumstances.

Some shortcuts run best as a widget, which you activate directly through the app or from notifications from your device. Others are ideally suited for use on Apple Watch. To use a shortcut using your voice, you’ll be asked during the install process to record a phase. Moving forward, you activate the shortcut by saying, “Hey Siri,” followed by the phrase.

Most shortcuts are found directly in the Gallery section of the Shortcuts app. You can also install shortcuts by tapping a provided link from a supported device.  Once establishing a shortcut, it becomes accessible across all of your supported devices.

You’ll find links for every recommended shortcut below. Tap “Get Shortcut” for the ones you want to get started, then tap “Add Shortcut” or “Add Untrusted Shortcut,” depending on whether the shortcut was created by a third-party.

The following useful shortcuts are located in the official app. After tapping “Get Shortcut” below, select “Add Shortcut” to install. 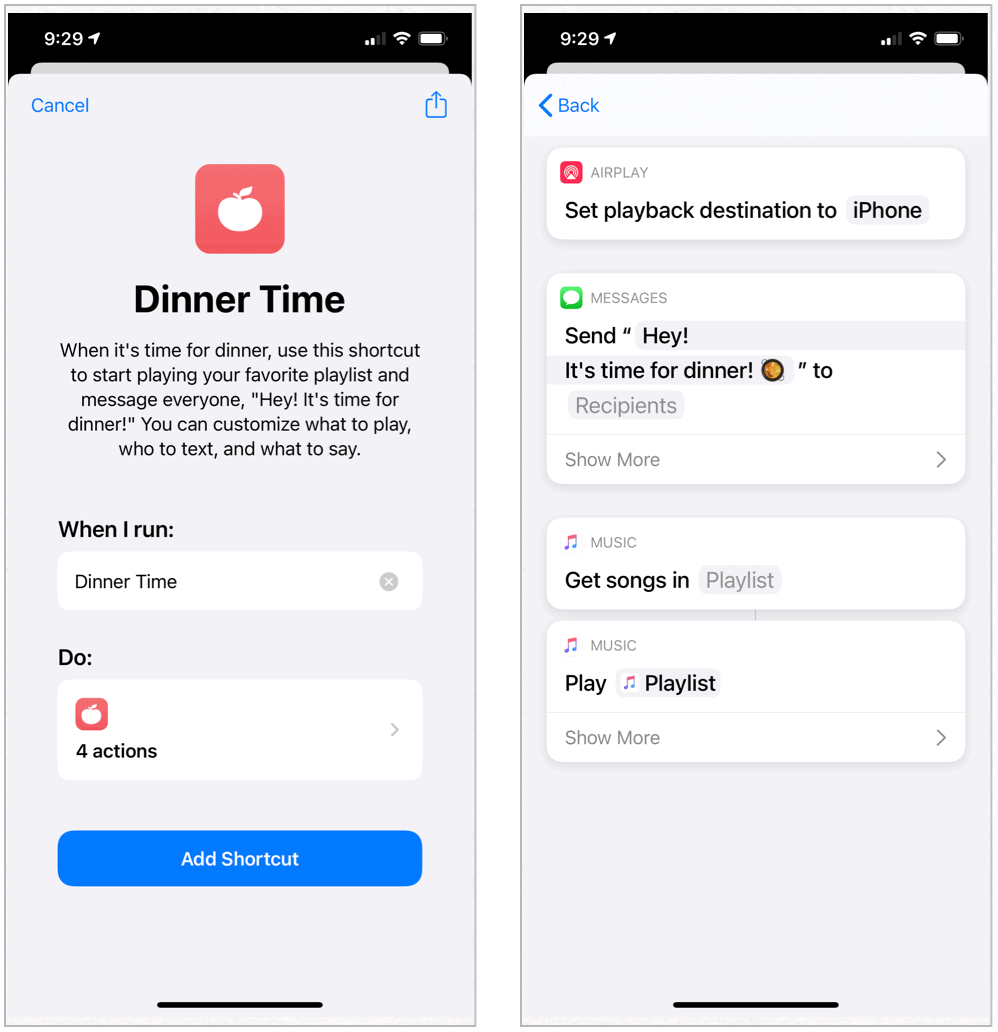 With this shortcut, you can let your family know it’s time to eat by sending out a message that reads, “Hey! It’s time for dinner!” The shortcut has also been designed to initiate your favorite playlist. The shortcut lets you customize what to play, who to text, and what to say. 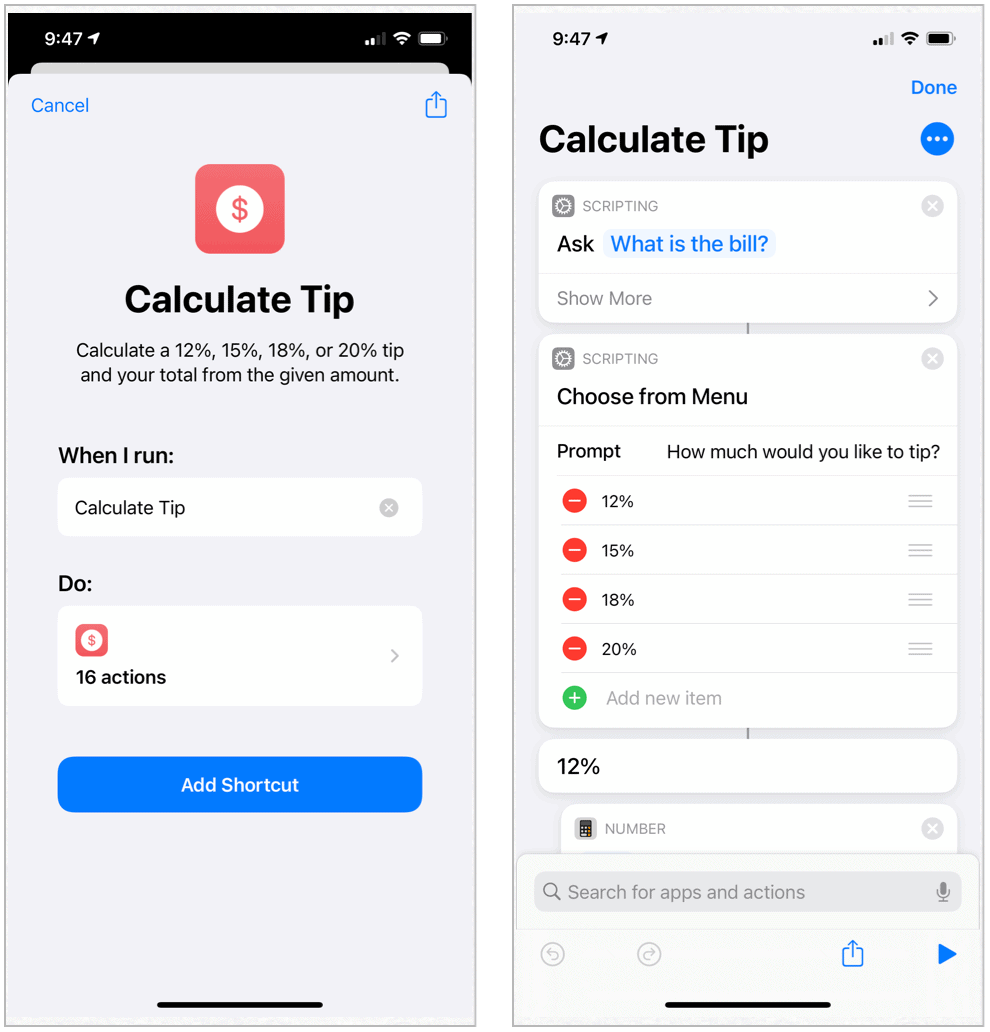 Reminder When At Home 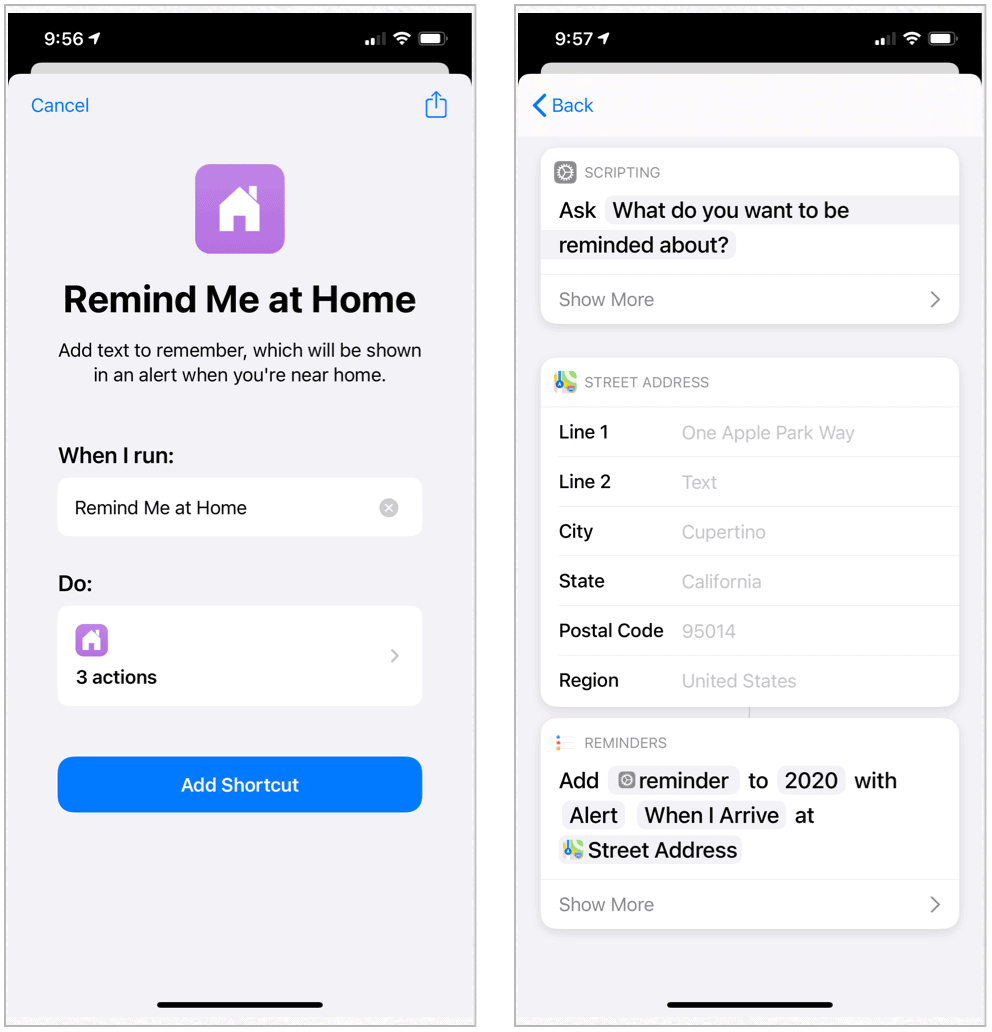 Here’s a shortcut that you can use to alert you about something upon your arrival back home. When you get close to the location, a pop-up screen will show your reminder. You’ll need to add your address to the shortcut to get started.  Simply add a note before your journey home. When activated, the record is added to the Reminder app.

Find Out Where a Photo Was Taken 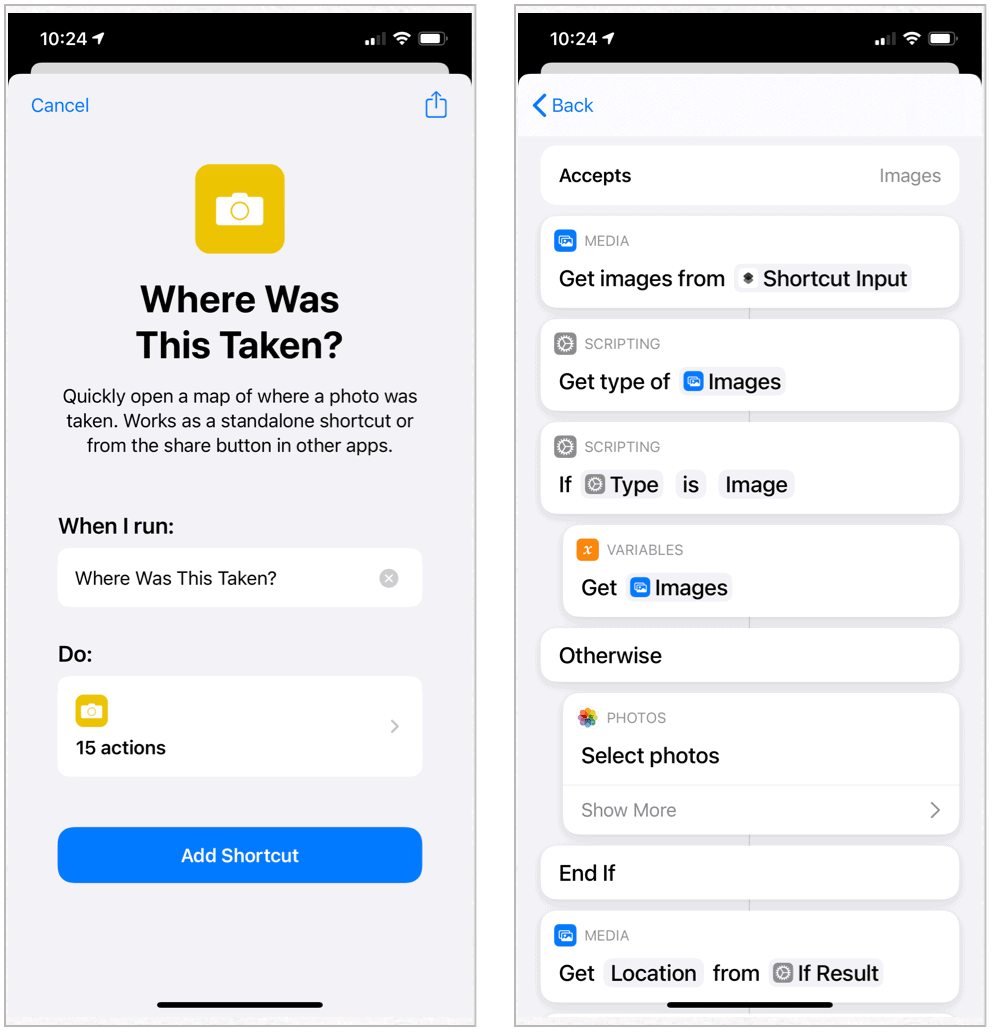 Before the pandemic, many of us traveled across the world and documented our journeys by snapping photos with our smartphones. Unfortunately, in time, it might prove difficult to remember when specific images were taken. With the “Where Was This Taken” shortcut, you can see on a map where a photo was snapped.

When installed, you can use the shortcut as a standalone or from the share button for use in other apps. Note the shortcut only works with photos that include location information. 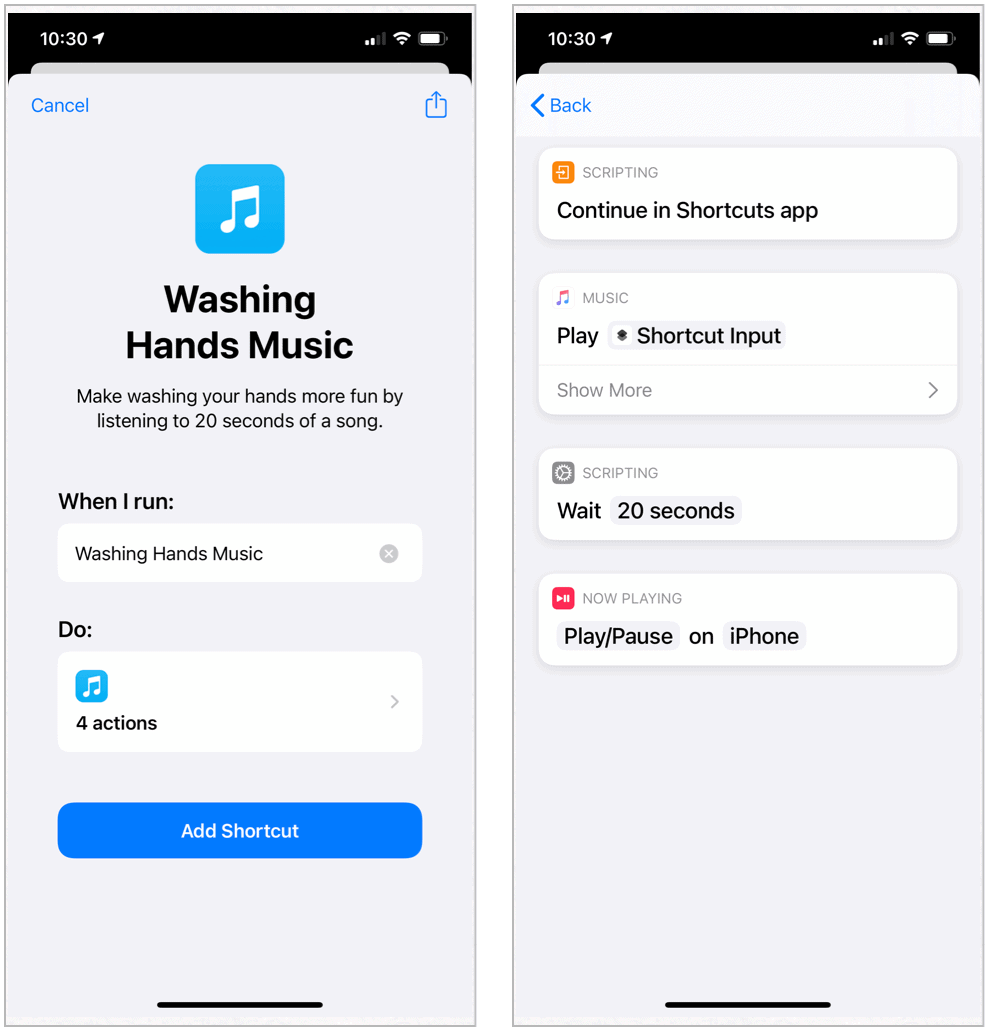 Speaking of the pandemic, washing our hands has become much more critical in recent months. With this shortcut, 20 seconds of a random song from your library will play, which is the amount of time the experts say we should be washing our hands.

Third-parties created the following shortcuts. Tap “Get Shortcut” for the ones you want, then tap “Add Untrusted Shortcut.” Each has been tested for availability and functionality, but Apple doesn’t support them. 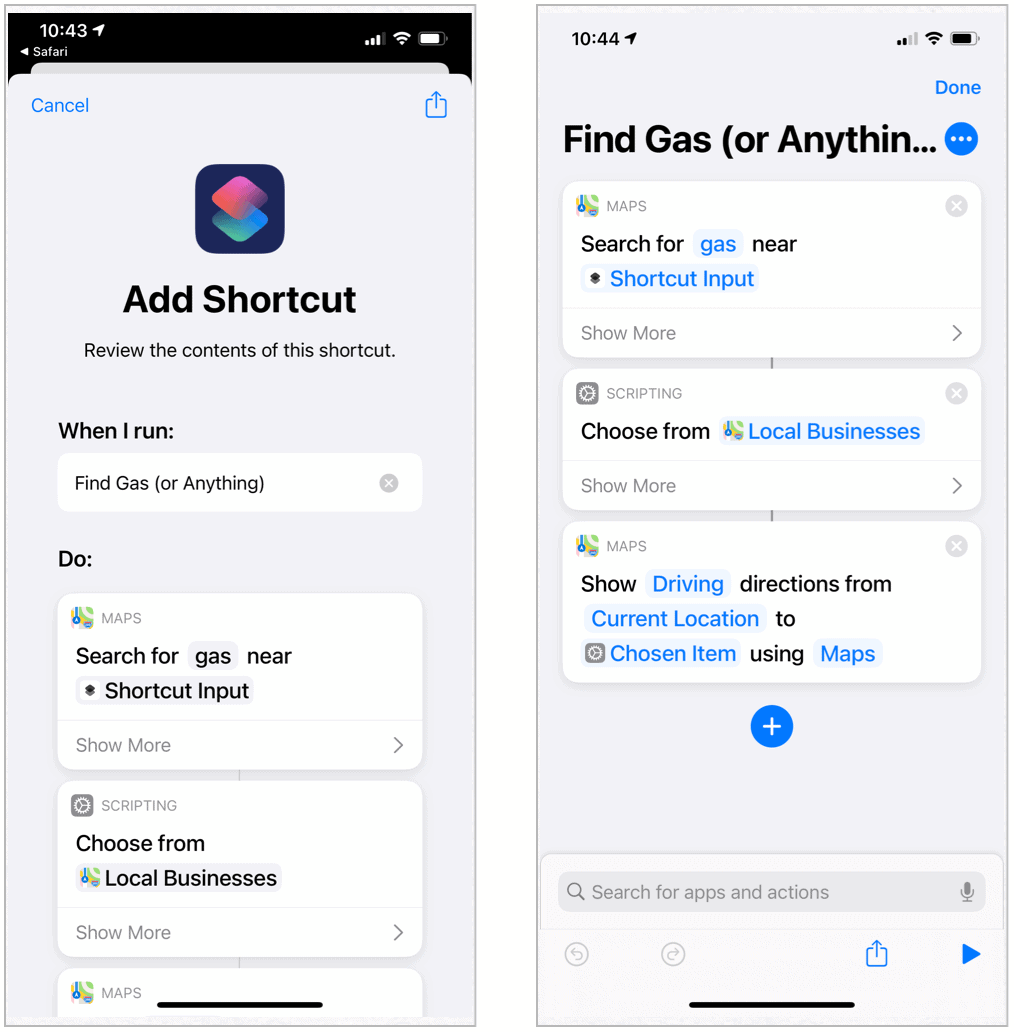 Noted on Lifewire, this simple shortcut quickly identifies the gas stations nearest to your location. Because it integrates with the Apple Maps app, the shortcut also provides links on how to get to the place. You can change the shortcut to find other types of locations instead. For example, you could swap out “gas” for “restaurants” or “coffee.” 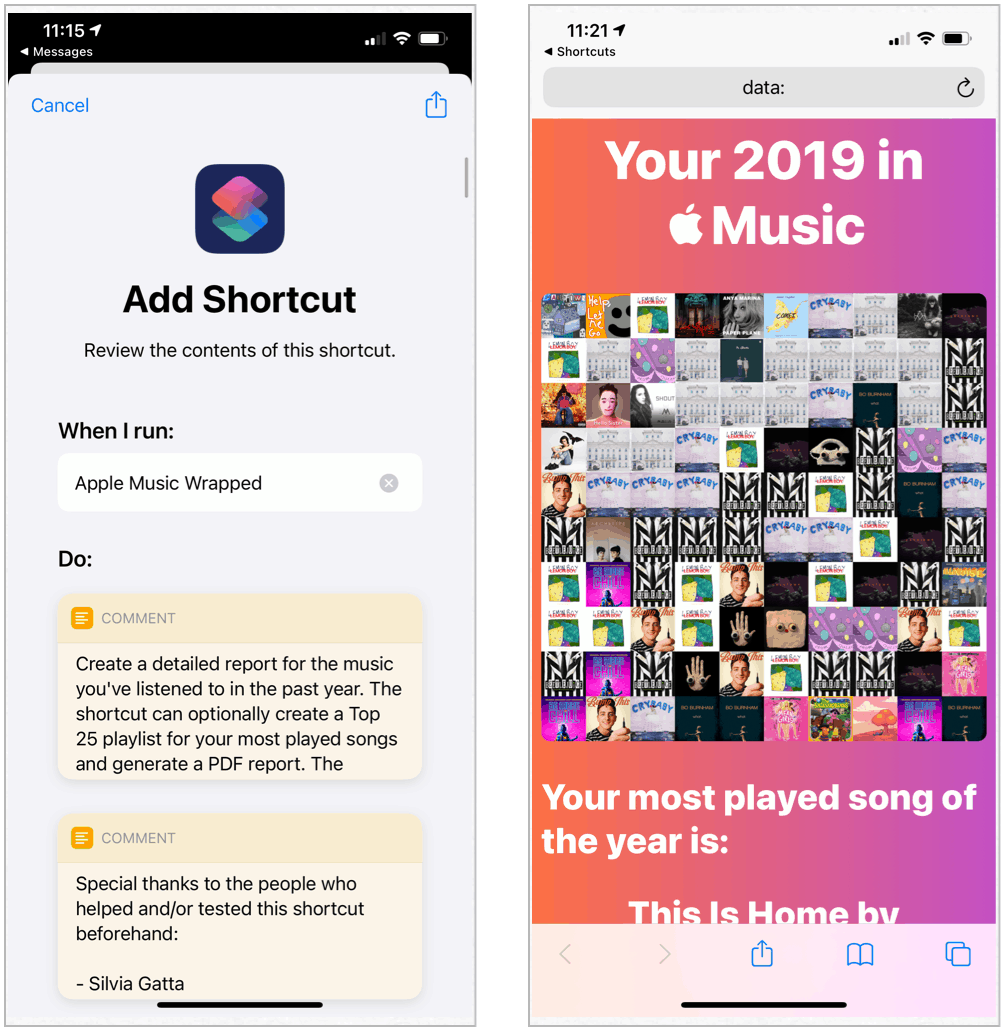 MacStories offers a massive repository for shortcuts created by Federico Viticci and the MacStories team. One of the shortcuts creates a detailed PDF report for the music you’ve listened to in the past year. By doing so, it also lets you create a top playlist featuring your most played songs.

Ideally suited for Apple Music subscribers, the shortcut includes songs that were played in full without skipping and added to your library in any given year. When configuring the shortcut, you’ll be asked to add the year and number of songs to add to the report. 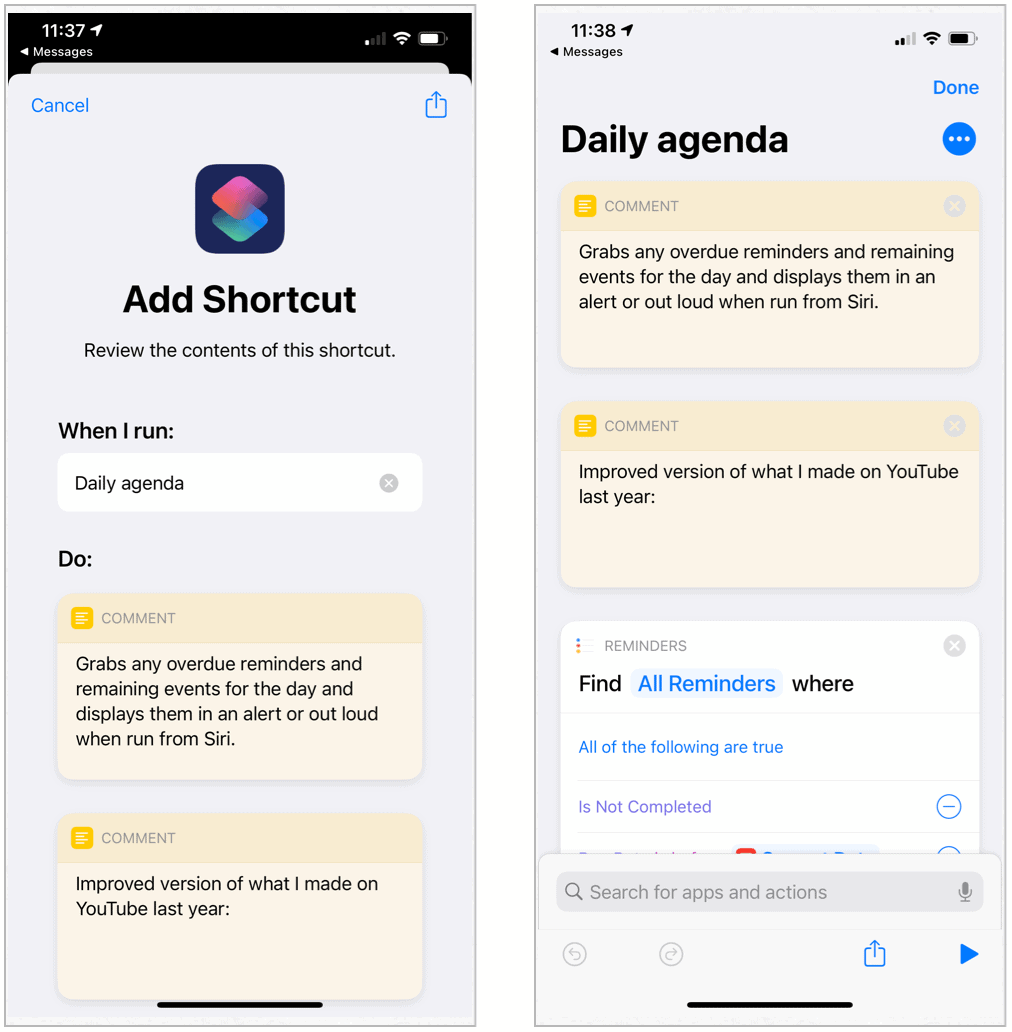 To develop Siri Shortcuts, Apple purchased a top-rated app called WorkFlow. Matthew Cassinelli once worked for that company and since then has published an impressive list of shortcuts for public use. Among them is a handy and straightforward shortcut, Daily Agenda. With the shortcut, your overdue reminders, and remaining events for a day are displayed along with an alert. 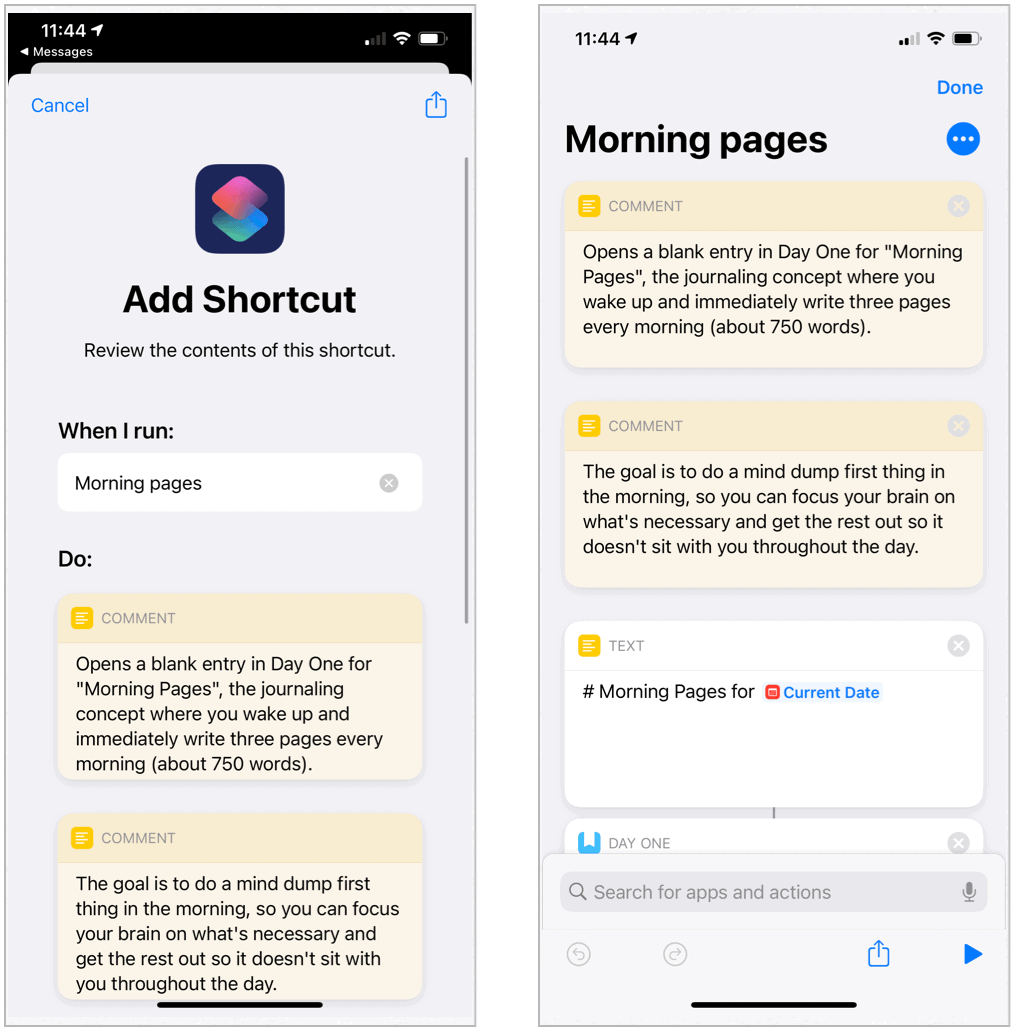 Sticking with Cassinelli is this Morning Pages shortcut that works with the popular Daily One app. When activated, the shortcut allows you to quickly open a new entry in the journaling app as you begin your day. 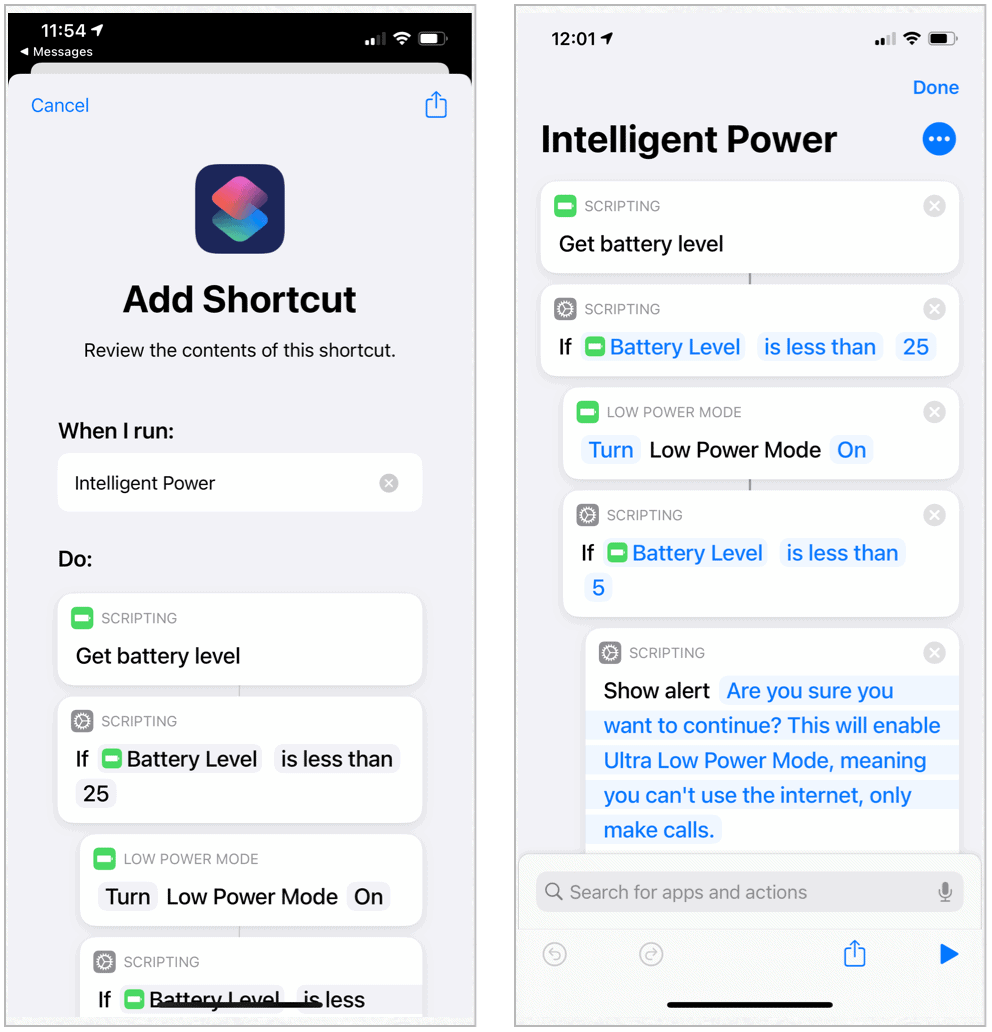 Noted by CNET, the Intelligent Power shortcut is for anyone who worries about battery life. With this solution, you can set two power modes that launch automatically when you hit a battery level. The first automatically turns on the device’s Low Power mode, while the second switches off the device’s internet connection to save battery life. You can easily change both percentages. The shortcut is usable from the app or through the Today View widget.

The shortcuts mentioned above offer a great starting point for beginning to automate tasks on your Apple devices. You can find many others in the Shortcuts app Gallery and by creating new ones using the same app. There’s also growing libraries of third-party solutions found online. When looking for these, we recommend sticking with reputable creators who have a long-standing presence online, such as Matthew Cassinelli and MacStories. Otherwise, there’s a chance you might download shortcuts that don’t work as advertised.

Regardless, Siri Shortcuts should bring some order to your life and make you love your Apple devices even more.