This year’s operating system updates for iPhone, iPad, and Mac include many new and enhanced features. Here’s what’s changed with Maps.

This year’s operating system updates for iPhone, iPad, and Mac include many new and enhanced features. Some of these changes focus on the native Maps app, which continues to impress with each new release. In iOS 14/iPadOS 14 and macOS Big Sur, most of the changes are refinement-based. You’ll also find a few new features as well, however. Let’s take a look.

On iPhone and iPad

Not surprisingly, most of this year’s Maps changes are found on the iPhone, Apple’s top-selling product.

To get started with cycling directions: 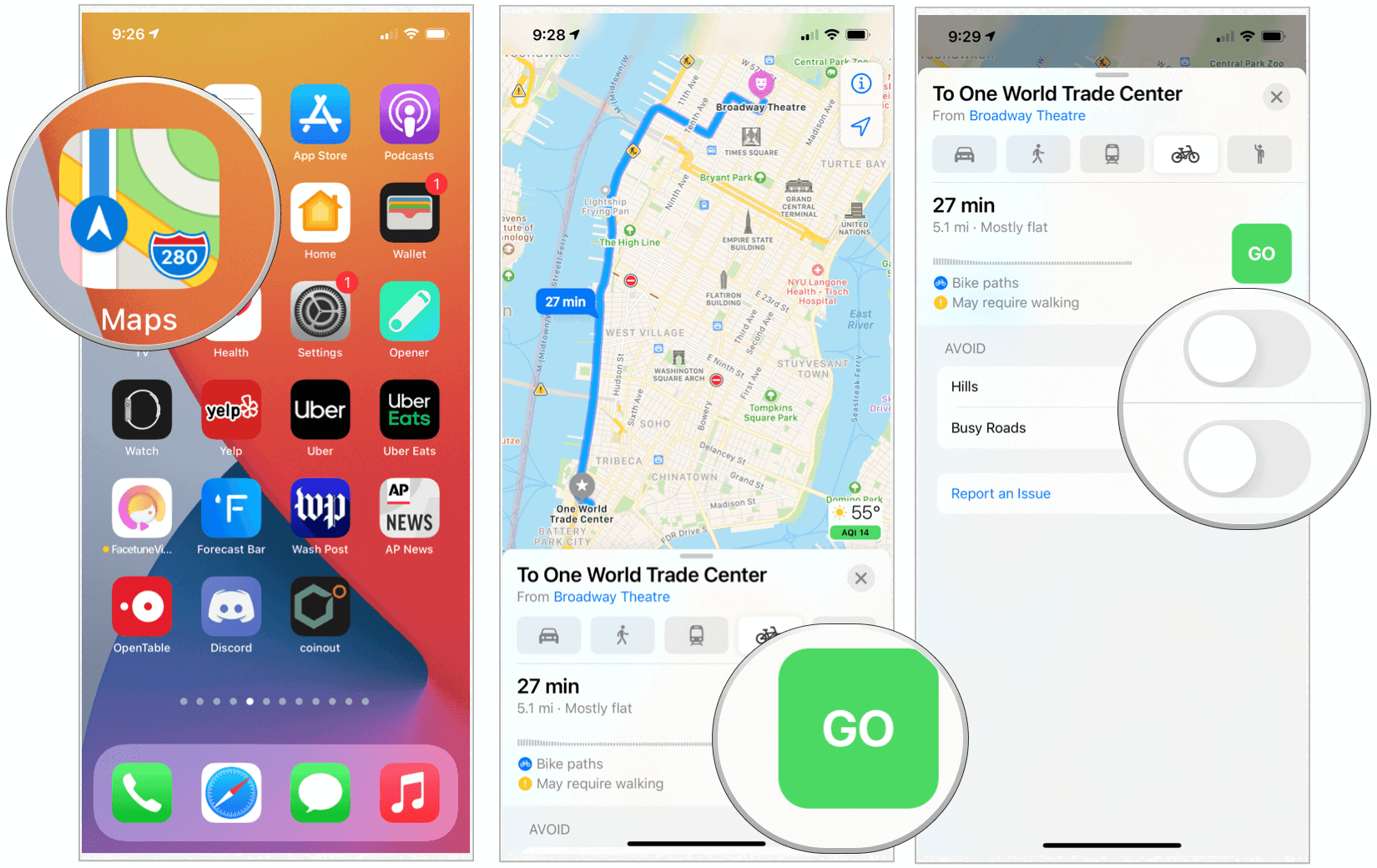 Professionally-created Guides are another new feature in iOS 14. From companies like Lonely Planet, AllTrails, and The Infatuation, the guides offer a listing of places in a location to eat, shop, and explore. Better still, they automatically update as new sites get added.

You can find the new guides on the main search page for a location. In the following example are the current listings for San Francisco: 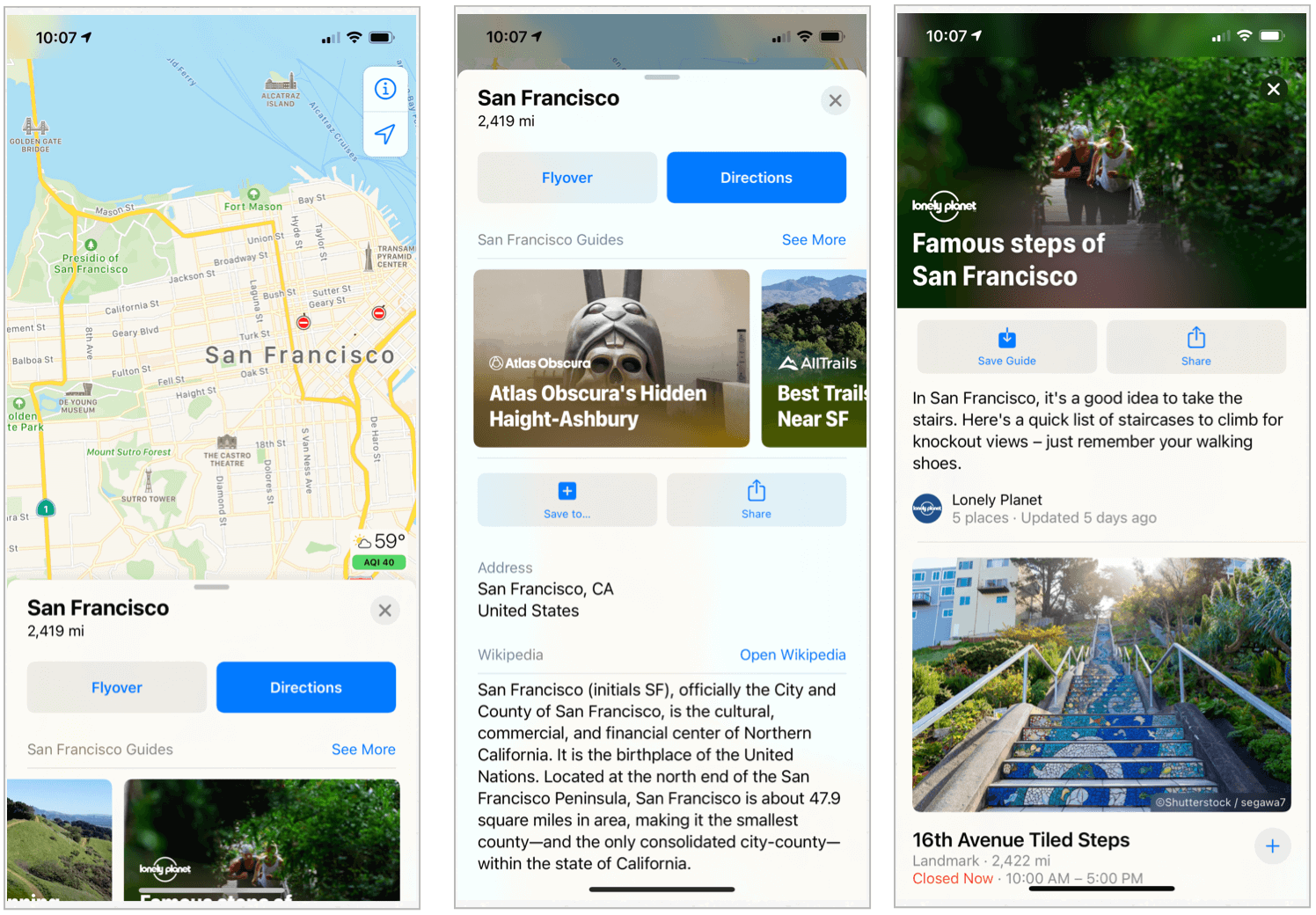 There are also new electric vehicle routing opportunities in the Maps app. Depending on your location, you can now find directions that take into account charging locations. In doing so, maps will account for charging time when calculating your ETA. By adding your electric vehicle to iPhone, Maps also keeps track of your current charge and charger type.

When using directions in the Maps app, you’ll now receive alerts whenever you approach speed cameras and red-light cameras. Each camera is also listed on the map. The update also provides more accurate location and orientation, even in parts of a city where the GPS signals are inadequate.

Do you live in an area with congestion zones designed to reduce traffic in dense areas? You can now see congestion zone tolls on a map and information on how to avoid them in real-time.

Meanwhile, in places like China, you can now enter your license plate number to confirm your vehicle’s eligibility in restricted areas. The license plate information is stored in the Maps app and never leaves the device.

Finally, Apple brings more advanced maps to places like Canada, Ireland, and the U.K. before the end of the year. The new map, which made its debut in the U.S., offers richer detail for roads, buildings, parks, airports, etc.

In macOS Big Sur, the changes to Maps are centered mainly on making trip planning more straightforward than before. Some features also come directly from the iOS Maps version.

The curated guides mentioned above are also available on the Mac version of Maps. You can use these guides to find new places to explore, eat, and shop. There’s also the ability to create customized guides that include your favorite sites. Once created, share these guides with friends and family. 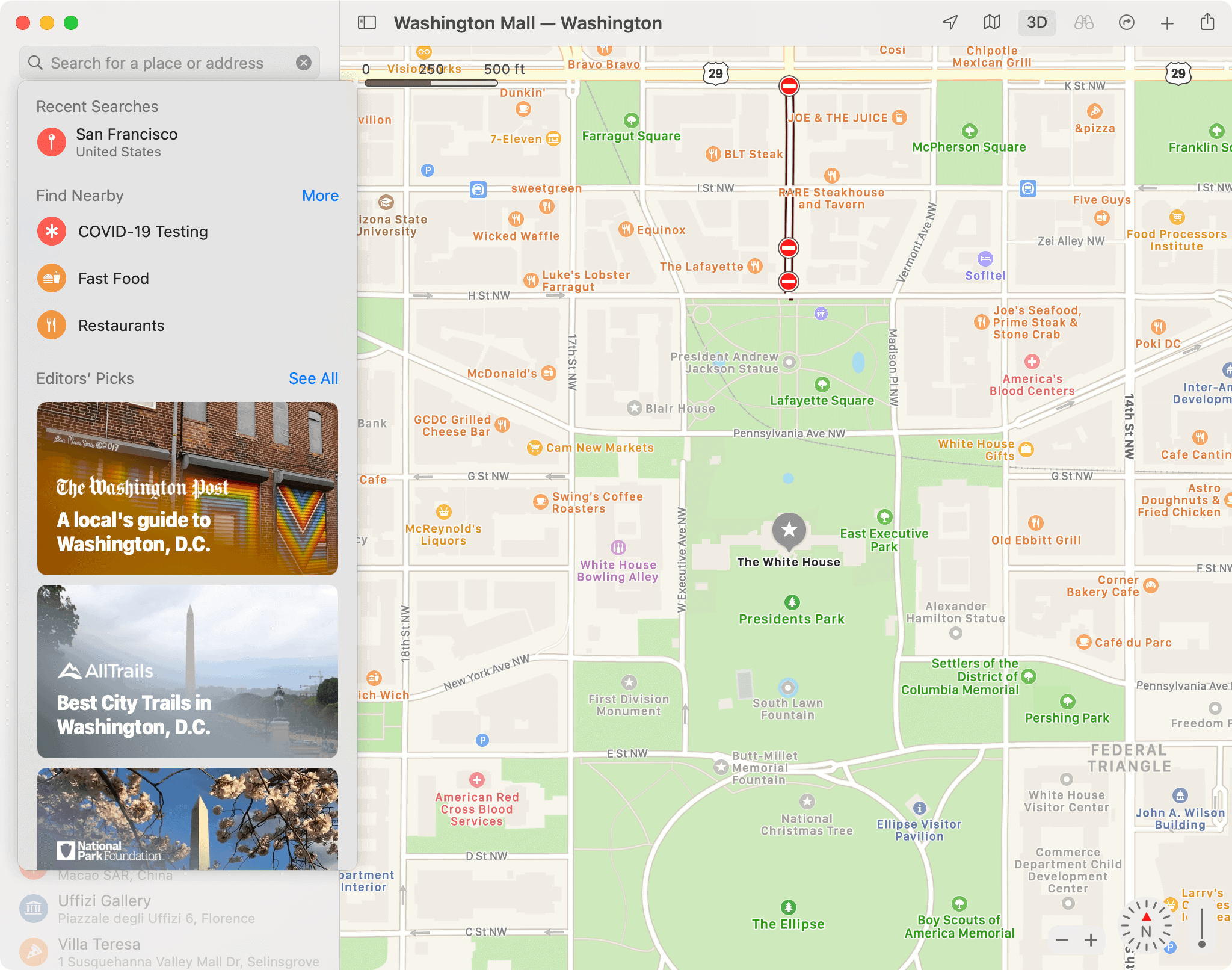 Carried over from previous versions of iOS is the ability to view live progress updates on your Mac from friends who send you a shared ETA. The feature provides up-to-date information on when they’re expected to arrive.

Indoor mapping is also coming to the desktop. You can view details about major airports and shopping centers from the comfort of your home.

Maps in macOS Big Sur also includes an interactive 3D experience features for select cities. Use it to pan 360 degrees and move virtually through the streets.

The macOS Big Sur update is perhaps the most significant update to Mac in a generation. With the update, Apple has created a redesign that feels both lighter and more robust than previous versions. From its updated menu bars to its new and updated sounds, macOS 11.0 feels welcoming and familiar. Besides a Maps update, macOS Big Sur includes a redesigned Messages app that looks like the one found on mobile.

macOS Big Sur also consists of an updated Notification Center, one-touch Control Center that sits directly off the menu bar, an expanded Maps app, etc. For privacy and security, Apple’s making it easier to identify which web sites have trackers and what app developers are doing with your data. You’ll also find faster software updates and better battery optimization on MacBooks.

The first macOS Big Sur public release should arrive in October or November. The update is supported by most Macs made in the past decade.

As you can see, there are significant changes in Maps in both iOS 14 and macOS Big Sur. From improved city guides and a cycling feature to speed camera alerts and more, Apple has you covered!