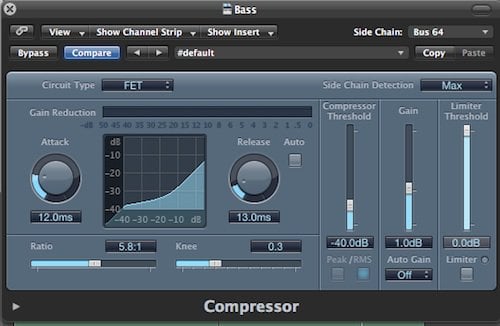 8bitjay continues his home studio series, and this week he explains sidechain compression. It will save your final mix from two elements from colliding.

Last week we talked about adding basslines to your song. The bass and the kick must work with each other instead of against each other. Today, we will learn about sidechain compression.

What is Sidechain Compression?

First, open up your song. For the purpose of my tutorial, I am going to hide all tracks other than the kick and the bass.

Here, we have a basic pattern: 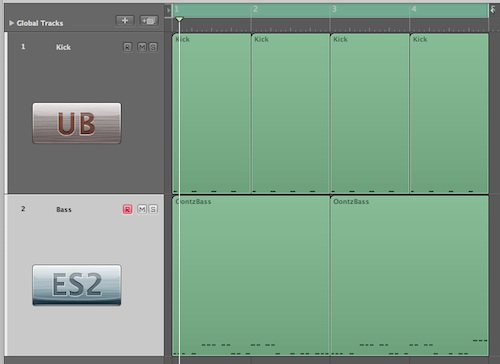 The pattern isn’t very important, but it makes a difference if the kick and the bass are playing at the same time on some notes. This is just so you can see what I’m working with. 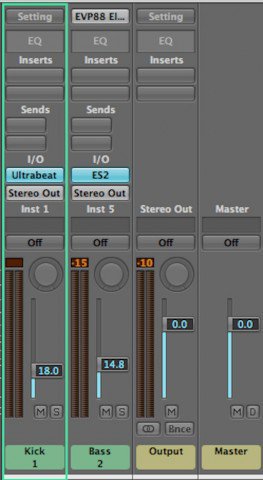 What you want to do is open up an auxiliary send from your kick channel to a new channel. Click under “Sends” on the kick channel strip. One trick someone once taught me is to send sidechain instruments to Bus 64, and work down. This makes things easier when you start using auxes for grouping (an entirely different concept we will get to later.) 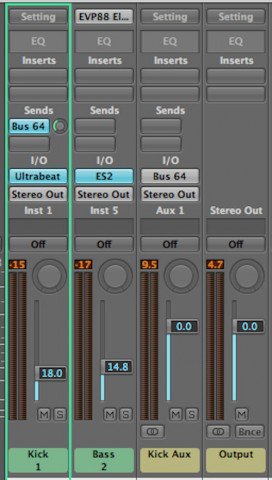 I selected Bus 64 from my kick send, and routed it out. Logic made a new channel in yellow called Aux 1. I renamed it Kick Aux. It’s a good idea to do this. Now, I can adjust how much of the kick I want to go out to the new auxiliary channel (via the send amount dial on the channel strip. It’s shown above next to the “Bus 64” on the Kick channel) The higher you set it, the more kick that comes through the Kick Aux. You just have to play with settings in a bit.

Now, you will add a compressor to the bass channel strip. If you are at this tutorial, you should already know how to do this in Logic. If not, and I get enough requests, maybe I will do something with some basics in the near future. 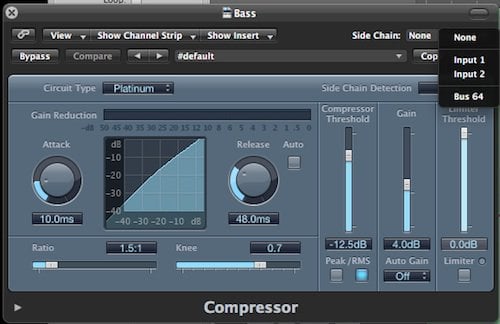 Now, loop playback and listen. This is where you will start making adjustments to your compressor and send amount:
I like to set my Circuit Type to FET. That’s just what I like.

Here are the settings I used. They are a bit extreme, but I tend to really like getting that bass to bounce next to the kick:

The cool thing about this trick is that you can do it with anything. You can use it on pads (this is also how you make gated pads). Some producers sidechain the entire mix over the kick. Some use it on vocals so the vocals slightly push down the rest of the track. You can really try it with anything. You can make the effect very slight, or you can make that track pump hard. The only advice I have for you is to listen to the song. If it sounds cool it is cool. If it starts to feel awkward, tone it down a little.

That’s it. See? That was easy. Play around with sidechain compression. Use it on whatever you want. A real-world example for me just happened last night. I used a slight sidechain in a voiceover a friend did. He had music playing in the background. I had his voice reduce the music very slightly each time he spoke. When he wasn’t speaking, the music came back up. It was slight, but it was enough to help make his voice pop over the music a bit more.

My buddy Mario of Sin DNA taught me about the ghost kick. Sometimes, you want your track to pump to the beat, but your kick drum pattern has lots of stops, changes, offbeats, and double-hits. This can sound awkward with a sidechain if it’s more extreme. The best thing to do in this situation is to set up a ghost kick. All I do is create a new kick channel with a 4/4 beat. Under the I/O part of the channel strip, I choose none. Then I use the send to bus it out to a new Aux line. I do everything I did above, but with what is essentially a muted channel. My bass will still pump to the 4/4 pattern, but my real kick drum sound can play as I intended. This is the method I use 90 percent of the time. Still, the one I described through the tutorial is essential. Now, you can apply that knowledge to anything in your mix.