Have you ever wanted to take a look at the history of a document, spreadsheet, or presentation you are working on?   Recently we took at look at tracking changes in Word 2010.  Google Docs has a similar tool, and they’ve just updated it and increased usability ten-fold.  This feature is especially useful on collaboration projects so that you can see exactly what each author has put into it.

Google Docs has always had a decent revision tool for looking at the history of changes in your document.  Today though brought on a new update for it that puts the old one in shambles.  When you consider all of Google’s real-time collaboration features and sharing ability it really makes the old revision history function seem archaic.  Well, that and the fact that it was hard to use, ugly, and only useful for fixing major errors.

Google has really streamlined the way you track changes in Docs.  Now instead of a clunky 1995 style interface, there is an useful sidebar and crossed out changes within the document that are color coded based on when they occurred. 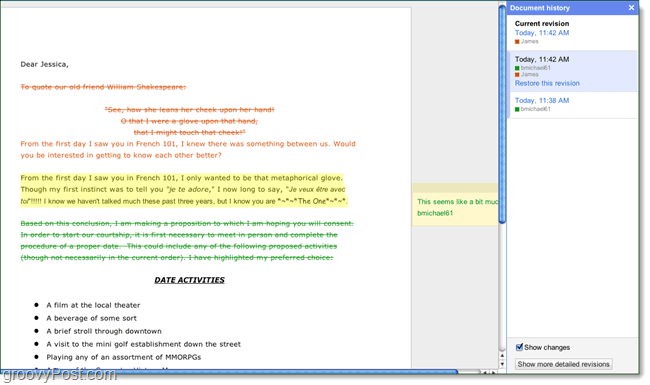 It is now also much easier to restore a revision, mostly because you can easily see the difference between when they are all on the same page. 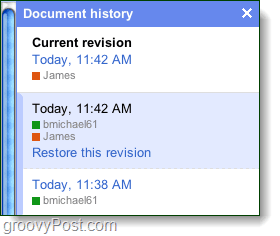 The new Google Docs Revision Tool is really groovy!  It seems in this case Google has learned a thing or two from Microsoft when it comes to tracking changes.  This new feature is available in any new Google Docs that is created from now.  Unfortunately Google hasn’t yet added support for pre-existing (older) Docs, but that doesn’t stop anyone from just doing a copy-paste over to a new one!