According to Grace D. – Google Employee:

64-bit turned out to be harder so we don’t have it ready yet, but we didn’t want to hold back the 32-bit-supporting version in the meantime.

The news first announced in the Google Sync + Outlook 2010 Topic – on the Google Help Forum. My guess is they will continue to keep everyone updated on that thread and their blog, as soon as there is full support available for the 64-bit versions. 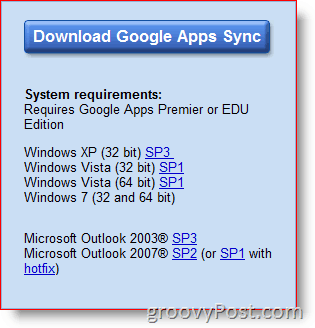 For those of you who have “Gone Google” and are using Google Apps Premier, I’ve still heard nothing in regards to Outlook 2010 support for the official Google Apps Sync for Microsoft Outlook.  Take a look at the System Requirements (snip on the right.) It appears Outlook 2003 & 2007 are still the only supported client. <sigh>