By now everyone should know that Google Voice has gone public and ANYONE can get an account.  Now with the latest upgrade, Google Voice has become a true Skype killer, land-line slayer, VOIP provider, and a threat to cell phone carrier’s minute planes.  Why?  Because you can make free phone calls anywhere in the United States and Canada using just your computer and an internet connection, no phone required.

If you are not entirely sure what this all means, Google has created a comical video to help explain things.

In order to use Google Voice from Gmail to call people over VOIP you will need the voice and video chat plug-in.  Download it here:  http://www.google.com/chat/voice/

Make Real Phone Calls To ANY Phone Number From Gmail

After you’ve installed the plug-in a “Call phone” button will appear on the left Gmail sidebar, it is located under Chat.  When you Click the button a phone dialog will appear just like the one you see in Google Voice mobile.  Type in the number or Google Contact name and call away!

Again, all calls in the United States AND Canada are completely free! 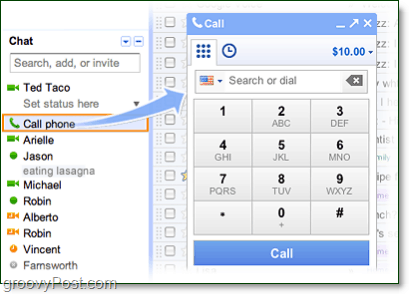 Conference calls are still at a 4 person max, but they DO work with Gmail!

Receive Google Voice Calls On In Your Gmail Browser

Don’t have a phone handy?  Or maybe it is just easier to receive the calls on your computer.  Either way, if you have the plug-in installed you can answer calls from your internet browser, just make sure a Gmail window is open.  But, before you will receive calls to your Gmail, you first must set up call forwarding.  This is done in the Google Voice settings.

On the Phones tab of Google Voice settings you’ll find the option to forward calls to Google Chat.  Just Check the box next to Google Chat above your Gmail address and then you are done. 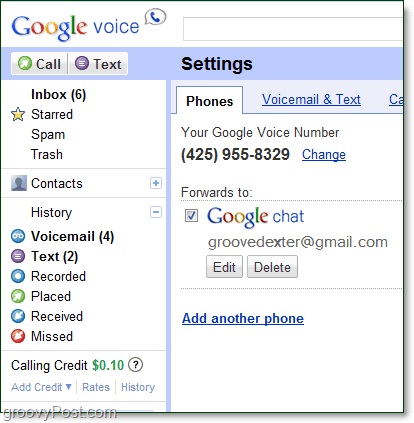 Once you have forwarding set up, if you receive a call on your Google Voice number it will now ring all of the devices you have checked and ALSO your Gmail window.  A small pop-up will appear on-top of your emails.  You’ll be given three options: Answer, Screen, or Ignore the call.

Answer and Ignore are pretty obvious, but the Screen option is rather groovy.

Here you can listen as your caller leaves you a voice message.  If at any time you want to jump in and start talking, Click Join. If tired of listening to them, you can also Hang Up.

Once your caller is done leaving a message, you’ll be given two options.
To Mark As Read press 7 on your keyboard.  To keep it Unread, press 9.

Gmail Texting From Your Google Voice Number, Possibly In The Future?

Google hasn’t yet integrated Google Voice’s texting features into Gmail, at least, not that we could tell.  In the same chat pane of Gmail you have the option to call or to Send SMS.  While it’s true you can send SMS to almost any mobile from Gmail, it doesn’t give the recipient your Google Voice number.  In fact it doesn’t even give the recipient a reliable static reply number, instead they just see a temporary one.

Earlier today me and MrGroove were testing out this new Google Voice-Gmail feature.  It sounds great, voice quality couldn’t have been better.  I called his cell phone from my laptop, he called my laptop from his cellphone, I called his MacBook from my desktop… etc.  It works!  The only catch so far is that all calls are handled by Gmail and so you must have an internet browser opened up with the same Gmail account that is connected to your Google Voice account signed in.

I wouldn’t call this a real threat to mobile carriers yet, but if in the near future we get the same functionality as the Gmail voice feature on Android phones… that’s big.  You won’t need “minutes” on your cell phone plan anymore, just Data.