Three weeks ago we covered the launch of the first ever Google TV device, the Logitech Revue.  In the community forum, members posted up some great screenshots and stats on the tech.  Are you interested in getting one?  What if I told you that the price was free. 7,000 Google TV devices are up for grabs, but there is a catch – you have to be a Google code or Google TV optimized web developer to have a shot at getting one of them.

Yesterday on the Google TV Blog and site, Google announced that over the next few months they plan on giving away a total of 10,000 free Google TV devices.  Before you get too excited, note this morning they already gave out 3,000 of those at the Adobe Max conference.  That leaves 7,000 total left to give out.  They’ve stated on the blog that 3,500 will be given out to developers that are part of the http://code.google.com/ community.  So if you aren’t a Google Code developer, that leaves a total of 2,500, and you might just be able to win one of them.

To enter the contest, visit this link and fill out your company information and a 100 word essay on why your company wants to optimize their website for Google TV.

Up to 2,500 prizes will be awarded to web developer companies that meet the selection criteria. Only one free Google TV device per company allowed. All entries must be submitted through the online entry form on this website by authorized representative of an eligible web development company. All entries must be received by 11:59:59 PM (PT) on Wednesday, November 3, 2010. Winners will be selected on or before January 31, 2011. Prize will be shipped to a winning company’s business mailing addresses with a shipment date on or before February 28, 2011. Program available in U.S. only for U.S.-based eligible companies. Subject to Official Rules.

Google doesn’t mention what specific device is being given away on their blog post.  They mention devices being sold in Sony Style stores, so it might lead one to think that Sony’s “Google TV Ready” televisions might be prizes.  Unfortunately, that isn’t the case.  Google states in the official contest rules that “All Prizes will be fulfilled and shipped by Logitech, Inc” so they are in fact giving out only Logitech Revues.

If you’d like to see some examples of sites that have already optimized for Google TV, visit the Google TV spotlight gallery. 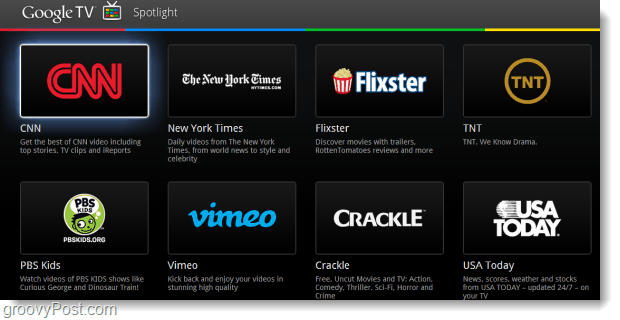 The contest is open from now until November 3, 2010. Get your entry in before then if you want a shot at a free Logitech Revue!