“Should I get the HTC EVO or the iPhone…?”  “The Samsung Galaxy Epic 4g or the Droid X…?” Those are the famous last words that usually end in a bloody fist fight between fans of both sides.  But, what about the facts? Have you seen the Smartphone Comparison chart in the groovyPost forum?  When I was deciding what phone to buy that thing was a life saver!   I think someone at Google picked up on the idea, because that is just about exactly what the new Google phone gallery is.

The new /phone site of the Google empire is like an online comparison shop for all Android phones.  You can sort by carrier, manufacturer, and country.  It is really simple, and it’s a groovy way to know educated yourself before signing up for a 2-year contract or buying a $500+ phone. 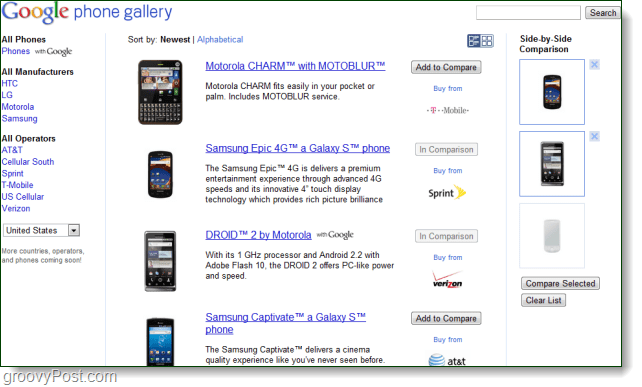 Do you have an Android phone?  Which one?  Tell us below in the groovy comments!