Last month, Google introduced Blogger Stats for all bloggers who use Google’s hosted blogging platform. Blogger Stats first became available for Blogger in Draft (the Gmail Labs equivalent for Blogger), but now the real-time traffic reporting mini-suite has been automatically integrated into all new and existing Blogger blogs. If you haven’t noticed yet, it’s accessible via the Stats tab on your Blogger dashboard.

So, what’s the big deal? Isn’t Google the same company who brought us the quintessential traffic analytics solution known simply as Google Analytics? And haven’t all serious bloggers already incorporated this free tool into their blogs?

The answer to both those questions is: yes. But that’s not the point here.

As I mentioned, Google Analytics is for serious bloggers who are serious about tracking their visitor activity, traffic sources, conversion rates, visitor benchmarking, etc., etc., etc. Blogger Stats is for people who are less serious about blogging (hence why they use Blogger, rather than a self-hosted WordPress or Drupal or Typepad blog) and have less serious needs for traffic analysis. As such, it’s my opinion that in spite of the seemingly cannibalistic rollout of Blogger Stats onto what could potentially be Google Analytics turf,  Blogger Stats is indeed the best traffic reporting tool for Blogger blogs. Here’s why:

Simplicity is the key here, and that’s the modus operandi of Google’s Blogger platform. Granted, installing WordPress on your own server isn’t particularly technically demanding, nor is copying and pasting the Google Analytics tracking code into a Blogger template. Both of those tasks can be pulled off in about five to six steps. But guess how many steps it takes to get up and running with Blogger Stats? That’s right: zero.

Blogger is one of those products that’s supposed to work for you right out of the box. Although there are some tech-savvy users on Blogger, the vast majority of Blogger denizens are the type that run for the door when faced by an intimidating chunk of raw code—even if all they have to do is copy and paste it. But that’s not to say that these folks aren’t interested in seeing a bit more robust of a traffic report beyond simple page views.

Frankly, I’m surprised that this feature wasn’t introduced sooner. WordPress.com bloggers have long enjoyed basic blog stats on their dashboards, replete with trending graphs, referring sites and top content reports. But unlike Blogger, WordPress.com is a strictly non-profit zone (no ads and limited scripting). Meanwhile, Blogger rolled out dead simple monetization via Google AdSense  last April. It just makes sense that they’d do the same for stats.  The same crowd that’s interested in making money with their humble blog is likely equally interested in understanding the flow of traffic to their blog, even if they aren’t hardcore SEO geeks. Blogger stats serves this need without overcomplicating things. 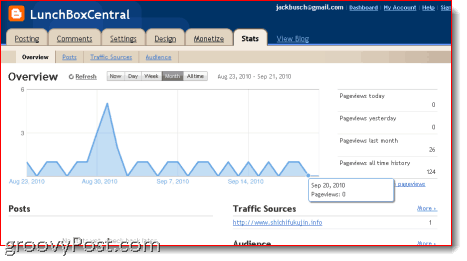 Everything You Need, Nothing You Don’t

I know some will disagree, but I think Blogger Stats has just the right amount of features. You essentially have three reports.  Posts (i.e. Content), Traffic Sources and Audience (i.e. Visitors). Plus, you’ve got the Overview that brings them all together. The number of features and reports pales in comparison to the undulating spider web laid out by Google Analytics to the point where it wouldn’t even be prudent to do a feature-by-feature showdown. But for the casual blogger, more isn’t always better. Most bloggers simply want to know a few key things about their traffic:

Any additional features that don’t speak to those needs is essentially clutter. I’ll admit that even after using Google Analytics for the past couple of years, there are quite a few items in the menu pane that I have no clue what to do with (kind of like half the doo-dads on my Swiss Army Knife).  Meanwhile, at no point will a Blogger Stats user find him or herself looking at their traffic report and asking, “What does this mean?!”

There are a hundred and one (give or take) things that Google Analytics does that Blogger Stats doesn’t, but there is one key thing that Blogger Stats has that it’s big brother doesn’t: Real-Time Stats. Whereas Google Analytics takes its time to crunch the numbers into refined data nuggets (reporting is often a few hours or a full day behind), Blogger Stats gives it to you raw with hour-by-hour reporting. Real-time tracking makes the most sense for highly social bloggers who may be cross-promoting their posts via Twitter or Facebook and want to time their plugs just right. And, of course, for the compulsive (or vain) stat stalkers like myself, seeing hits as they come provides some instant gratification for a fresh post.

Overall, Blogger Stats is a simple solution for your everyday Blogger. I think it fills a niche nicely, especially since, contrary to popular belief, Blogger Stats isn’t just a watered-down version of Google Analytics. Those running both Blogger Stats and Google Analytics on their blogs back in the Blogger in Draft days noticed some discrepancies in reporting—particularly in terms of picking up traffic from robots and other non-human visitors. This issue has been addressed for the official release, but it goes to show that there are some fundamental differences between the two statistics tools, even under the hood. (On another note, Google also added the “Don’t track my pageviews” feature based on feedback from the Blogger in Draft release.)

But it all boils down to the fact that lightweight tools are best for light applications. Google Analytics is a lumbering Hummer of an analytical tool, whereas Blogger Stats is more on the magnitude of a sporty subcompact. Unless you plan on doing any heavy lifting, Blogger Stats should pull its weight.