In the first article in my series on Google Insights for Search, I introduced you to the Timeline feature of the service and showed you how to compare three search terms related to our hypothetical mobile gaming startup. We wanted to find out which would be the best platform to roll out our game on: Android, iPhone or Blackberry.  In this article I’ll be reviewing how to drill down into the data using the Timeline, News Headlines, Forecast and Categories features of the service to drill down further into my product research.

The first step in conducting research using Google Insights for Search is understanding the timeline and drilling into it to get the search data your looking for.

The totals in the right hand corner give you the big picture. Looks like iPhone is the clear winner here, with Android just about tied with Blackberry. The timeline reveals that Android has been just barely edging out Blackberry recently, though the story was different earlier in the year. That could be interesting, as it could mean that Blackberry is on the decline while Android is the up-and-comer, which it is…

Now let’s take a look at some of the other features Google Insights for Search has to offer which should be used when researching a specific keyword, product, market or timeline.

There’s a check-box in the top-right hand corner of the timeline that reads News headlines. Click it for more insight:

The headlines are plotted out onto the timeline. This one is actually pretty dang interesting. As you can see, iPhone dove a bit after the iPhone tracking controversy broke in April/May 2011. But it picked up speed again after the announcement of iOS 5.

Meanwhile, take a look at the headlines for Android and Blackberry. This is where the news really tells a story that the graph can’t. We see that Blackberry is steadily losing ground, even in spite of its big announcement in April/May about Blackberry 7 and its new line of smartphones. Meanwhile, all the stories about Android are incredibly bullish.

There are probably some explainable complexities as to why Android’s relatively lower search volume compared to the iPhone doesn’t yet comport with the headline “Google widens smartphone lead over iPhone, Blackberry.” But the takeaway is that it pays to analyze some of the qualitative buzz as well. Looking at just the numbers, you might assume that Blackberry and Android were equally as good bets—but the news seems to indicate that Android is the safer wager.

You’ll notice in the above screenshots that the Forecast check box is grayed out. This is only available with the 2004 to present filter on. 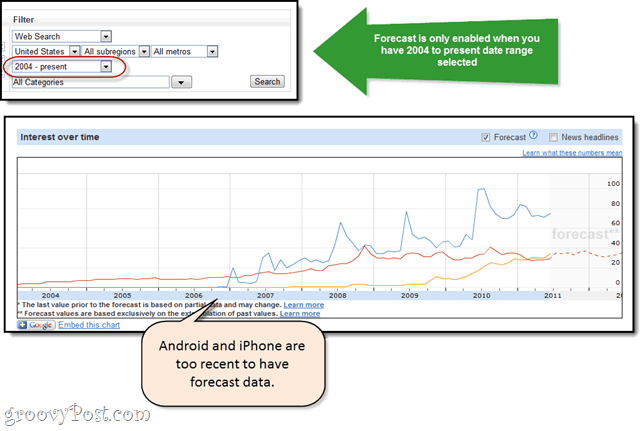 Even with the 2004 to present date range selected, you’ll notice that many trends don’t have forecasts. For example, iPhone, which started getting searched in 2006/2007 has no forecast data. Neither does Android, which only started getting buzz in 2008. Blackberry, on the other hand, dates back far enough to have forecast data (the dotted line that extends into 2011). The usefulness and accuracy of this data will vary depending on your search term. For our example, it’s not very helpful—especially since historical trends dating back seven years has less impact on volatile tech stuff.

There’s another useful feature that applies to our example. Remember that we were starting a hypothetical mobile gaming startup. So, we know that iPhone outpaces Android and Blackberry is on the decline. But what about in the specific context of gaming? Let’s set our date range to Last 12 months and drill down by category. You can see popular categories along the top of the timeline. Let’s Click Games. 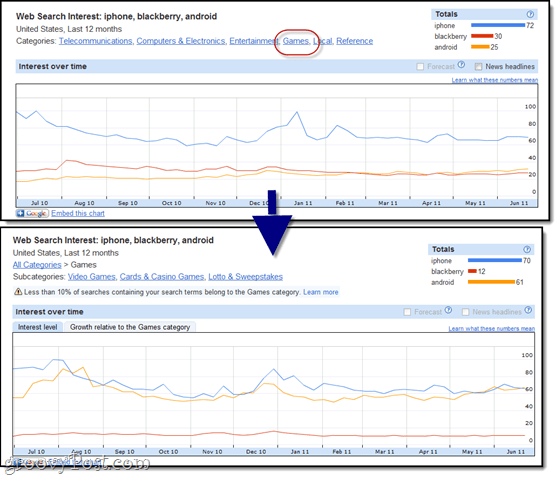 This changes things big time. As you can see, the gap between game-related queries for iPhone and Android closes significantly compared to general searches. This may suggest that, although iPhone has a larger share of search interest, a bigger chunk of Android users are interested in games. The picture looks even grimmer for Blackberry here, which is unsurprising, since Blackberry is the preferred platform for business users. To test that logic, let’s choose the Email & Messaging subcategory and see how Blackberry fares. 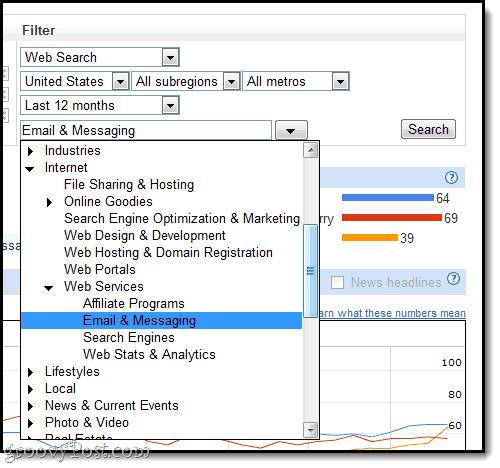 And there you have it—Blackberry absolutely stomps Android and even edges out iPhone in the realm of email & messaging.

If we were looking to create some kind of secure messaging protocol for a mobile platform, we might want to go with Blackberry or iPhone based on this data, at least in the short-term.

Using the timeline, we’ve learned that the iPhone remains the most popular smartphone platform for our hypothetical gaming company.  Blackberry and Android have similar interest levels, but the news headlines indicate that buzz is building for Android while it may be waning for Blackberry. We also found that, although iPhone has more searches in general, a larger percentage of Android-related searches have to do with gaming. While there is undoubtedly more due diligence to perform here, this is an excellent starting point for anyone in the early phases of planning a project or business. We will be touching on this in the next groovyPost on the series: