Today Google Announced they have expanded Google Maps to include Live Traffic Conditions for Arterial roads.  Previously Google Maps only displayed traffic conditions for Major Highways (freeways), so this is a nice addition.  Most of the time I need to know which back road I should take when the highway is busy!  The new feature is automatically enabled once you turn on the Traffic Layer in Google Maps for both Mobile Google Maps (iPhone, Android, etc.) and Full blown Google Maps on Browsers.

While playing around with the new features, I noticed new Traffic options as well on Full browsers (nonmobile Google Maps) which allow you to show both Live Traffic as well as Traffic by Day and Time. 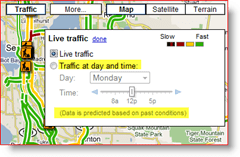 These features will be fun if you need to plan a trip for an interview or?? and need to map out your path.  Note, however, that the Traffic at day and time as of 8/25/09 will only show traffic estimates for Highways, not Arterials. 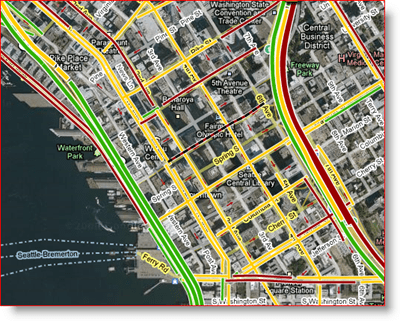 In another Article posted today, Google explains how they can display the Live Traffic data for Backroads by pulling anonymous GPS data from Mobile Phone users who use Google Maps for Mobile.  Google/Geeks call this data collection from the masses “CrowdSourcing.”  From a privacy standpoint, Google points out that only those Mobile Phones which are actively running Google Maps with GPS enabled AND the My Location is set to Enabled will send anonymous data back to Google Servers.

Additionally, some phones which run Google Maps such as the iPhone do not support “CroudSourcing” yet, so then even if you have GPS on your phone and you’re running Google Maps, your phone will not be sending any data to Google.  Then there’s the fact that some carriers block 3rd party apps from accessing the phone’s GPS, so that’s another scenario where no data is collected.

To be honest, I don’t think this is a huge privacy issue today since Google continues on the Privacy Topic saying:

We understand that many people would be concerned about telling the world how fast their car was moving if they also had to tell the world where they were going, so we built privacy protections in from the start. We only use anonymous speed and location information to calculate traffic conditions, and only do so when you have chosen to enable location services on your phone. We use our scale to provide further privacy protection: When a lot of people are reporting data from the same area, we combine their data together to make it hard to tell one phone from another. Even though the vehicle carrying a phone is anonymous, we don’t want anybody to be able to find out where that anonymous vehicle came from or where it went — so we find the start and end points of every trip and permanently delete that data so that even Google ceases to have access to it. We take the privacy concerns related to user location data seriously, and have worked hard to protect the privacy of users who share this data — but we still understand that not everybody will want to participate. If you’d like to stop your phone from sending anonymous location data back to Google, you can find opt-out instructions here.

However that being said, their Opt-Out process is somewhat lame, AND you can never be 100% sure what a company will do with your data once they have it (management changes, profits go down, need more revenue streams, etc.)  Couple that with the VERY PRO GOOGLE Terms of Service (which I hate) and Google could do whatever they want with that data.  Let’s just hope they don’t start sending it to insurance companies and law enforcement.  Yeah yeah, I know. Probably VERY unlikely they would do this on purpose but…  It’s all about being informed.

Personally, I’m wondering why they chose not to leverage other tools provided by cities like Seattle where you can track the location of City Buses.  Granted not all cities offer a window into its transit system however for the cities that do, this would be a perfect way to determine traffic conditions on almost all roads.

[author] [author_image timthumb=’off’]https://www.groovypost.com/wp-content/uploads/author/steve-author.jpg[/author_image] [author_info]About the Author:
Steve Krause, aka MrGroove, is the founder of groovyPost.com.  A Seattle native, Steve works in Corporate IT and in his “spare time” enjoys writing at groovyPost and BYTE.  If you want to connect with Steve or just give him a bag full of money, drop an email to Steve@groovyPost.com[/author_info] [/author]
4 Comments