Today Microsoft released its Free Virtual Server Hypervisor Hyper-V Server 2008 R2 1.0 (not sure what’s up with the 1.0) and made it available for download on the Microsoft Download Center.  The release candidate was released back in May, so it is good to see Microsoft keeping their nose down kicking out code non-stop from Redmond (no summer for you!!!)

Hyper-V Server 2008 R2 is a big deal for Microsoft.  Among other new features, Microsoft finally delivers on Live Migration (also known as VMotion by VMWare) with the R2 release, giving them the ability to FINALLY compete with VMWare and other modern Virtual Server products. 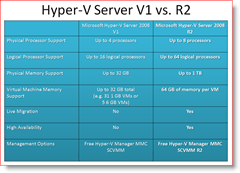 With Live Migration, Microsoft can at last perform moves/Live Migrations of RUNNING virtual servers to other Physical Hyper-V Hosts.  Up until now, that’s been the one feature missing, preventing it from being a true Enterprise Product.  Without Live Migration capabilities, it just wasn’t an enterprise product.

Here’s a look at a few other key features releasing with R2 of Hyper-V Server 2008 R2: