Firefox is a great browser, but one of the biggest annoyances with Mozilla is the Add-On support for beta versions. Whenever you try to download an Add-On made for an older version of Firefox, your newer version will receive the well-known error message: “…could not be installed because it is not compatible with this Firefox.” Well, now we’ve got an easy way to fix this by using a simple trick that allows us to disable the Add-On Compatibility checker.

How To Disable The Firefox Add-On Version Checker

First of all, you will need to call your trusty companion – Firefox. For XP, simply go to Start > All Programs > Mozilla Firefox 3.6 Beta 4 > Mozilla Firefox. Of course, if you are running Vista or Windows 7 you can always start it up more quickly by opening the start menu and typing in Mozilla then Pressing Return.

Now open the Mozilla Config page by typing about:config into the address bar. A warning will appear notifying you that you are now in the most serious parts of Mozilla. Go ahead and click “I’ll be careful, I promise” to move along. 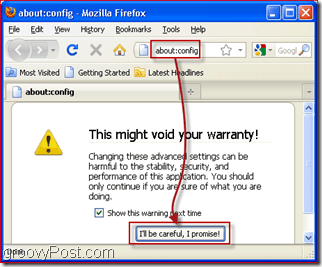 They ask you for a Boolean value. Type in:

Press OK. “4.0b” stands for version 4.0 Beta. Whenever you need to use another version, simply change the numbers to your current Firefox version. Make sure to add a b if it’s a beta!

Next, make sure you mark false in the next dialog so that you disable the compatibility checker. Click OK, and – finished here!

Close Firefox and Open it again. Try out any of the older extensions now. They should begin to install, and you will be able to enjoy your favorite Add-Ons once again.

Even with groovy new Add-Ons developed more and more very day, there are still some old Add-Ons that you cannot replace. That’s why we think this trick will be at the top of the Mozilla tricks list for every regular Firefox user.

If you’re interested in Web Browsers, make sure to “stay tuned” for our upcoming review of the “Google Chrome Power List” – all the Chrome extensions you’ll need to use Chrome like a PRO.