It’s about time Microsoft gave RegEdit.exe an update. Check out this small, but welcome change to the Registry Editor.

Windows 10 brought us the “Windows as a service” model that is marked by a steady stream of software updates and an ever-expanding list of features throughout the operating system. But on the other hand, there are some Windows apps and components that have remained largely unchanged for years. For example, WordPad wasn’t revised until the release of Windows 7 in 2009, and Microsoft Paint didn’t get an overhaul until very recently, with the introduction of Paint 3D.

And then there are the parts of Windows that never seem to change. One of the most glaring examples is the Font Manager from Windows 3.1, which survived even in the Windows Vista release, which promised to be a major modernization of Windows at the time.  Another longstanding holdout is the Registry Editor, which keeps general operating system settings and configurations of each app and hardware driver on your Windows 10 device.  Over the years, the only thing that has changed about RegEdit.exe has been its icon—until now.

There is a subtle, but welcome improvement in the latest release. Let’s give it a quick look.

Navigating the registry can sometimes be confusing and dangerous if you don’t know what you are doing. If you do have to make modifications there, Windows 10 now makes it easy to find just the key or value you want using a new address bar. All you need to do is to paste or type the path then hit Enter. Then, you’ll be immediately taken to that registry key.

The Old Way of Navigating the Registry

Prior to Windows 10, version 1703, navigating the registry was a bit tedious. Let’s say you wanted to go to the following key:

You had to first locate the key name, expand the key then begin drilling down until you found what you were looking for. 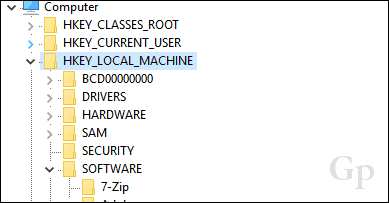 The New Way of Navigating the Registry

Starting with version 1703, all you need to do is copy and paste the path to the value into the address bar then hit Enter.

Like I said, it’s a very subtle tweak. There are still many areas where the Registry Editor could improve. There could be some further functionality added, such as using the Address Bar for universal search, now you are limited to just registry paths. Hopefully, improvements to relics like Registry Editor is a sign of Microsoft intention to modernize other parts of Windows 10 more often.

Which parts of Windows 10 do you think are due for some renovation? Let us know in the comments.