Do you like Bacon? What about the 6 degrees of Kevin Bacon game? I’ve been sucked into it during road trips, but I never thought it would come to Google.

Google just implemented a new feature that uses the IMDB to pull up the number of connections to reach Kevin Bacon for cast members listed in the database. You’ve probably heard of this as a conversational game among cinema buffs. The premise behind it is that every actor who has been on screen is at least 6 film castings away from Kevin Bacon. The degrees needed to find a connection to Kevin Bacon is known as the actor’s Bacon number.

To find it on Google, all you have to do is type in the actor’s name followed by Bacon number in the search box. 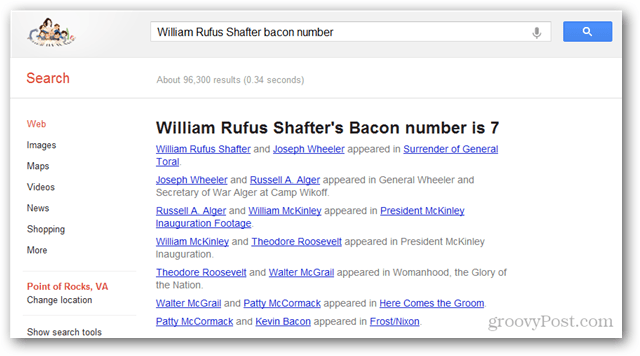 While it isn’t the most useful trick added to Google’s search service, it’s an entertaining one. As far as I could tell, the current record holder still stands to be William Rufus Shafter who holds a Bacon number of 7, one of the few actors outside of the 6 degrees of Kevin Bacon. Have fun!