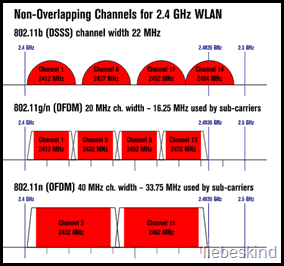 Which Wi-Fi Radio Should I Use?

That answer depends on the environment where your router is set up. The ultimate goal is to choose a WLAN channel with the least amount of traffic, and therefore the least potential for radio interference. In this article, I’ll run through some quick tips for choosing the best Wi-Fi radio channel. Doing so will make your WLAN connection more reliable and perhaps faster, too.

If you have a dual-band 802.11 g/n router, you may have the option to use the 5 GHz band. But should you? Maybe. Unlike most tech specs, a higher number doesn’t automatically mean better performance. Here’s what you should know about 5 GHz:

If you are having connectivity or signal strength issues with your wireless N devices, then it might be worthwhile to try switching to 2.4 GHz only, especially if the band isn’t particularly crowded. But if you live in a dorm or apartment complex with dozens of routers, remote controls, garage door openers, wireless keyboards, etc., all broadcasting on the 2.4 GHz frequency, then switching to 5 GHz may give you some relief.

Other people’s routers (OPR, if you will) are the biggest causes of Wi-Fi radio interference. OPR becomes especially problematic when you have lots of neighbors all on the same wireless radio channel. And when you consider most areas only have one or two ISPs (Comcast or the other guy), the same techs are likely coming out and setting up home networks in the same way. Even if your neighbors are buying their own routers off the shelf, there’s a good chance they’ll end up on channels 1, 6, or 11 (common defaults).

The obvious solution is to hop off the wireless channels that are being used most heavily. To determine that, you can use a stumbler to analyze available Wi-Fi networks. Netstumbler is a popular choice, but it doesn’t work with some wireless devices (I couldn’t get it to work in Windows 8). There’s an Android app called Wi-fi Analyzer that works on smartphones and tablets. Recently, I’ve been using Meraki’s Wi-Fi Stumbler tool, which is a Java app that works right in your browser. 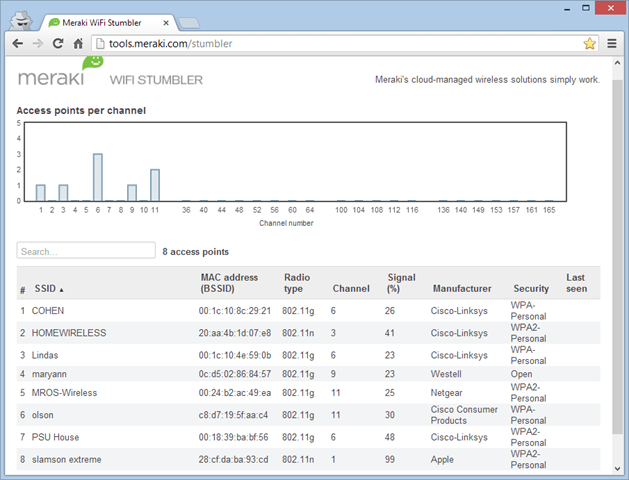 Meraki will even give you a bar graph of the access points per channel. As you can see, my neighborhood doesn’t deviate too widely from the norm—lots of channel 6, with 11 in second place. I live in a “suburban-esque” street, rather than a crowded city block, so things aren’t bad for me. But it wouldn’t be unusual to see 10 or more people all hogging channel 6.

If you don’t want to go through all the trouble of investigating and assessing your network environment, you can try to go ahead and make some tweaks based on some general assumptions. If you want to attempt improving your Wi-Fi signal through trial and error, try these steps:

1. Disable 5 GHz. If you have wireless N devices trying to reach a router in another room over 5 GHz, try turning it off and seeing if you do better on 2.4 GHz.

3. Choose auto. Some wireless access points, such as the Airport Extreme, have built-in spectrum analysis, which lets them automatically choose the least crowded channel.

Tweaking your wireless band and channel is only the tip of the iceberg when it comes to optimizing your wireless speeds and reliability. But they are relatively low-hanging fruit since changing the channel is easy to do and may yield a boost in performance. Give it a shot, and if it doesn’t work, move on to the next tip.

Which Wi-Fi channel do you use? Why? Let us know in the comments.