Shared Experiences (Project Rome) is a developing feature in Windows 10 that allows you to send links, files, and messages between devices.

Starting with Windows 10 Anniversary Update, Shared Experiences (Project Rome) only worked between Windows 10 devices. Now, starting with Creators Update (version 1703), this handy feature allows you to start a task on one device and finish it on another. It also lets you set up a remote control or companion app on another PC or mobile device. It’s comparable to Apple’s Handoff feature.

To turn Shared Experiences on or off, head to Settings > System > Shared Experiences and toggle the switch to enable or disable it. Note that you can also choose to share or receive data from only your devices or any device nearby from here. 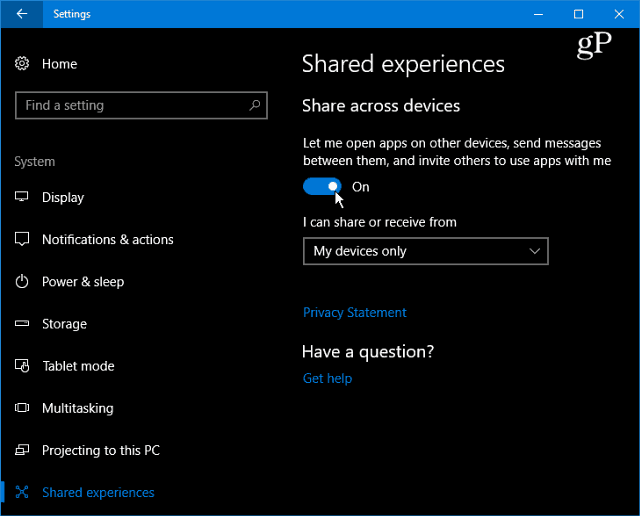 Since this is a relatively new feature, few apps take advantage of it as developers haven’t implemented it yet. However, depending on the app, you can use it to remote control applications, share web links, or send messages between Windows 10, Windows 10 Mobile, Xbox, iOS, and Android. Hopefully, when the Fall Creators Update is released later this year, more apps will take advantage of the Shared Experiences feature.

Apps that Support It

A couple of apps with the Shared Experiences feature built-in are Sharame (Android Client) and Notepad U. In the example below, you can see the UWP Notepad U app. It’s a simple light notepad app that lets you create text files, and with the Project Rome feature built-in, you can click the computer link from the top toolbar and then find the device you want to share the file with. So when I send this text file to my laptop, the Notepad U app opens on it, and I can start again where I left off. 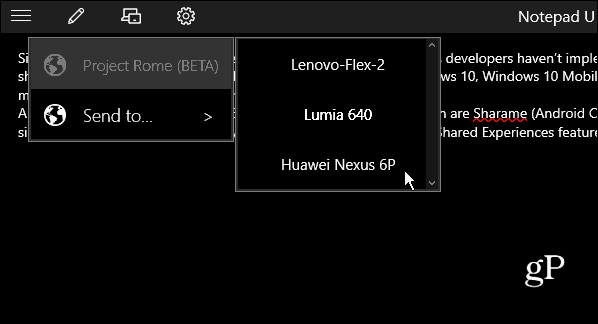 Notepad U is an app that uses the Shared Experiences feature. So I can send this text file to other nearby devices and finish working where I left off.

Again, it’s hard to find apps with Shared Experiences built-in, and the process isn’t perfect yet. I searched the Store for Project Rome and got a handful of apps. While testing Sharame and Notepad U, I had the best results with Notepad U. Sharame couldn’t find my Android device, and it kept crashing on my Windows 10 computer anyway. 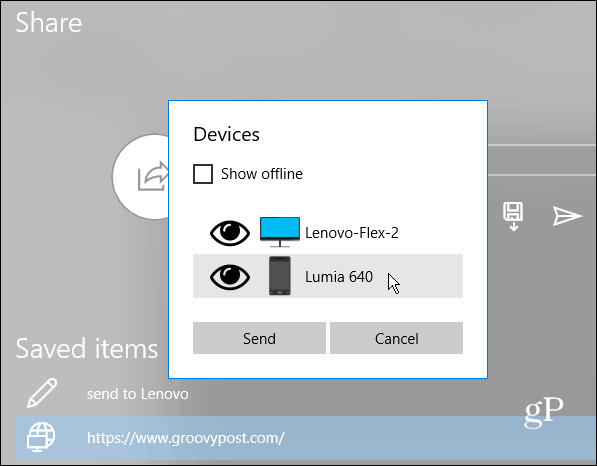 Example of sharing a link from one device to another with the Sharame app.

Of course, you will need the same app installed on both devices, be signed in to your Microsoft account, and have the Shared Experiences feature turned on. While still in its infancy, this feature could become a staple of Windows 10 moving forward. Especially once it gets integrated into Office.

Have you used the Shared Experiences feature in Windows 10? Leave a comment below and let us know what you think of it or what its potential could be.