The next time you launch Firefox, you should be prompted to install the latest Firefox release – V3.5.8.  Yesterday I touched on the importance of keeping ALL the software on your computer updated with the latest security patches, so it’s only appropriate the folks over at Mozilla released an update for Firefox after reading my very groovy article. ;) 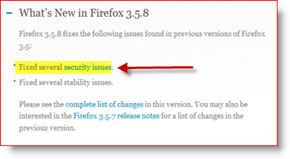 On a serious note, if you’re a Firefox user it’s important to grab 3.5.8 as it includes several Security Patches in addition to a few stability updates (Yes IE hater, Firefox has security bugs also.)  Although the list is relatively short, the Firefox Security Advisories page shows Version 3.5.8 corrects 3 Critical Vulnerabilities which could be used to run attack code on your computer with no user interaction.  <nasty>