It’s that time of year again: Apple’s new iPhones are out. At the heart of the iPhone 13 series is the all-new A15 Bionic processor. Cupertino calls this the “fastest chip ever in a smartphone.” So what do the benchmarks say? It’s time to find out.

Say Hello to the A15 Bionic

Each new iPhone series always brings a new chipset, which is always better than the one before it. And yet, after 15 iPhone generations, more than a few would-be users might be wondering how much faster the iPhone 13 series is compared to previous ones and whether the difference is that big of a deal.

During its iPhone 13 presentation and explained in its marketing materials, Apple claims the A15 Bionic offers up to 50% faster graphics performance than any other smartphone chip. In addition, the new neural engine can perform up to 15.8 trillion operations per second, which makes it possible to utilize features like Cinematic model Smart HDR 4, Live Text, and more.

The A15 Bionic also plays a role in providing significant battery improvements versus the iPhone lineup. Consider these numbers:

What the Experts are Finding: iPhone vs. iPhone

Since the iPhone 13 handsets were released, various outlets have released benchmark tests, including single-core, multicore, and GPU calculations.

Macworld does a great job of comparing this year’s iPhones with last year’s models using GeekBench 5. 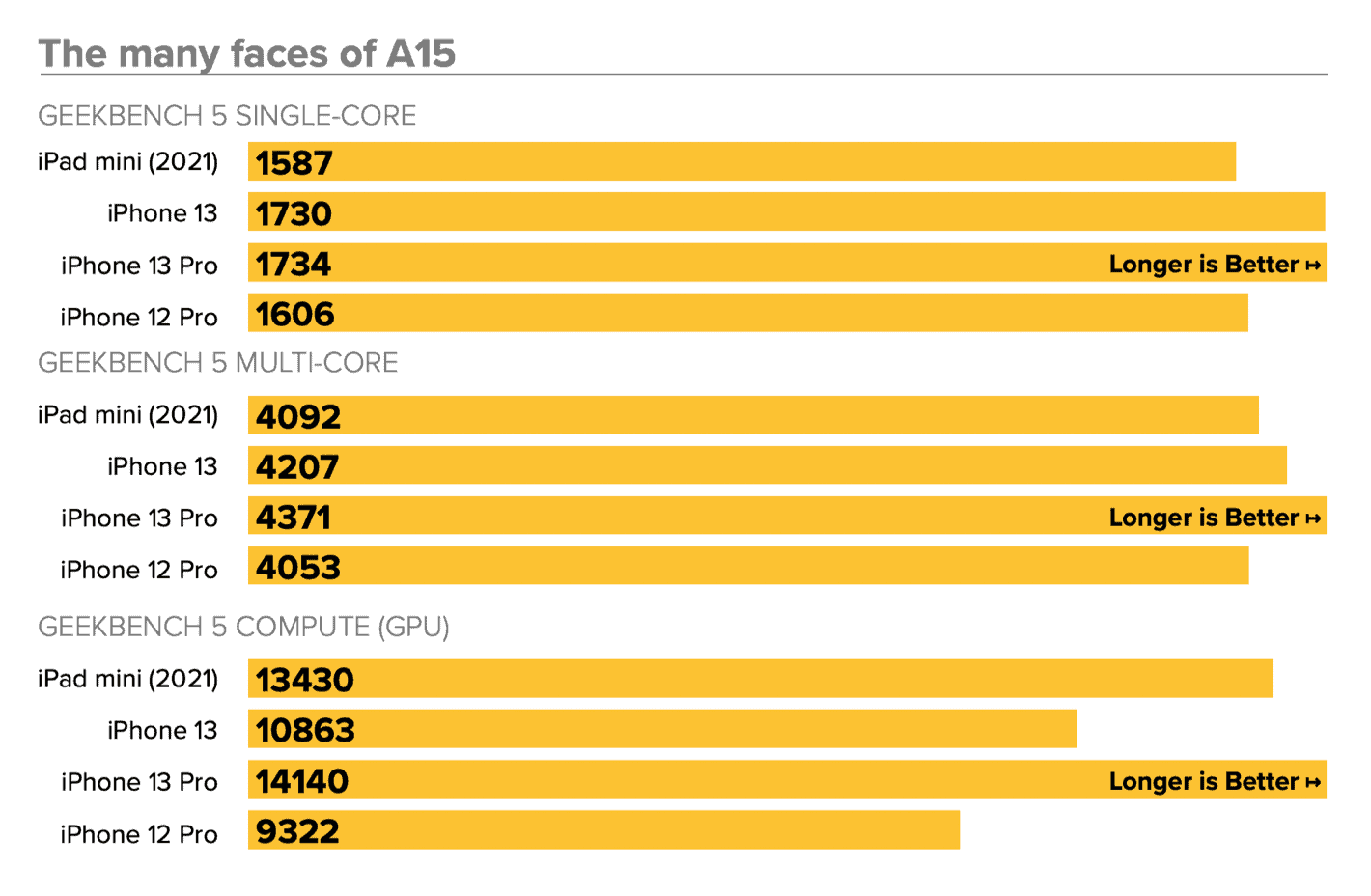 Macworld says the A15 Bionic is a “smaller upgrade” than previous iPhone chipsets. The four previous processor upgrades averaged a 20% speed boost in single-core performance, and it only found an 11% increase this time around. The changes were even less noticeable on multicore performance, just 4% versus the 22% gained on average for the previous three generations.

Regardless, Macworld believes judging the A15 Bionic means looking beyond the benchmarks. Specifically, it mentioned the battery gains that are undeniably significant when comparing this cycle to the previous one.

What the Experts are Finding: iPhone vs. Samsung

Over at PCMag, a different approach was taken when looking at the A15 Bionic. Instead of comparing one iPhone series to another, it looked at Apple’s latest iPhone chipset with the one found in Samsung’s Galaxy S21 Ultra. It wasn’t even close.

The Geekbench benchmark found that the A15 Bionic bested the Samsung Galaxy S21 Ultra’s Qualcomm Snapdragon 888 by 46% in the multicore, with the former getting double the frame rate with GPU.

What the Experts are Finding: 5-core vs. 4-core GPU

Circling back around solely to iPhone, PCMag also took a look at the GPU performance between the 13 and 13 Pro series. As stated above, the iPhone 13 Pro series includes a 5-core GPU, the less expensive iPhone 13 consists of a 4-core.

PCMag explains the difference between the two this way in colorful language. It says, “The iPhone 13 Pro adds a fifth GPU core to the iPhone 13’s four, but there’s nothing about that which would, in my mind, create the 35% jump (!) in GPU benchmark performance I’ve been consistently seeing.”

What do all of these numbers mean to the average iPhone user? There are different ways to look at this. If you’re coming from an iPhone XS/XS Max, you’re going to see massive gains. You’ll notice it regardless of the iPhone 13 model you choose. However, for iPhone 12 series owners, the changes will feel far less noticeable, but not completely. There’s also the GPU difference between the iPhone 13 and iPhone 13 Pro to consider.

As someone who went from an iPhone 12 Pro Max to an iPhone 13 Pro Max, I’ve noticed a zippier performance on the newer model. The improvement is most noticeable on startup and when moving between apps. No doubt, the fast version of the iPhone 13 Pro’s camera system is also attributed to the A15’s speediness. However, this system is much different from the one found on the iPhone 12 Pro series. Therefore, it’s impossible to compare.

It will be interesting to see how the A15 Bionic continues to perform on the iPhone 13 series and where we’ll see it show up next. With the iPad mini and iPad recently refreshed, it’s the next-generation iPad Air (in 2022?) where the A15 Bionic will likely pop up again. Stay tuned.