Disney Plus has around 50 million subscribers already after just five months. Here is a look at some of the hottest titles for every age group in your family.

Just five months after its debut, Disney Plus has gained 50 million subscribers. To keep those viewers happy, the mouse house has created Disney Plus to appeal to all age groups. Here’s a look at some of the hottest titles on the premium video streaming service by age. Enjoy! 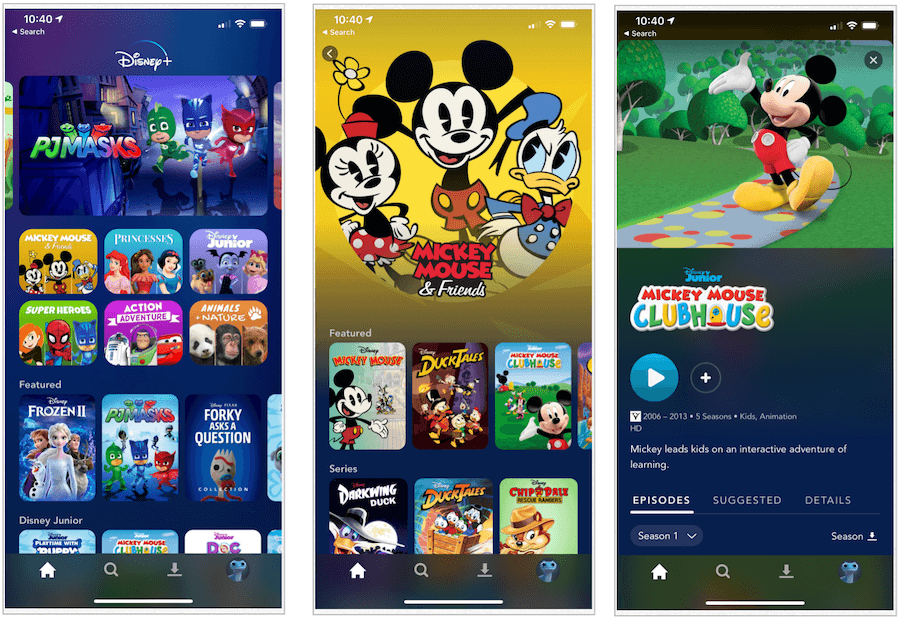 It shouldn’t come as a surprise to anyone that Disney Plus targets kids under the age of five. With this regard, you can create Disney Plus profiles that limit content for its younger viewers. Much of this content focuses on Mickey Mouse and friends, Disney princesses, cartoon-based superheroes, and animals/nature. Video content from Disney Junior is also here.

Mickey Mouse is one of the biggest stars on Disney Plus, with movies, series, and shorts featuring the world’s No. 1 mouse extending back to 1928. To begin a deep dive into the popular character, show your kids Steamboat Willie, a short film that introduced Mickey to the public for the first time. Mickey Mouse Club should also be considered, as should Minnie’s Bow-Toons, featuring Mickey’s girlfriend.

From there, move onto Mickey’s friends, including Donald Duck (DuckTales, Beach Picnic, Winter Storage), Goofy (The Goof Trip, How to Fish), and many more.

Disney’s bread-and-butter, princess-themed movies, also play a significant role. From Snow White and the Seven Dwarfs to Frozen II to straight-to-video content like Cinderella II (and III) and Beauty and the Beast The Enchanted Christmas, all the titles are here for unlimited viewing.

Disney Plus includes a growing library of superhero content for viewers not old enough for Marvel (see below). These include the cartoon series X-Men, Kim Possible, Ultimate Spider-Man, and more. Adults who grew up with Saturday morning cartoons should also check out this section for old favorites and new faces.

Disney’s magic isn’t just about fictional superheroes and princesses. It also extends to the real world with Disneynature programming. Over the years, the company has released impressive documentaries, including ones about dolphins, elephants, sharks, and many more. Combined with the National Geographic content on Disney Plus, the real world is on full display on the service. 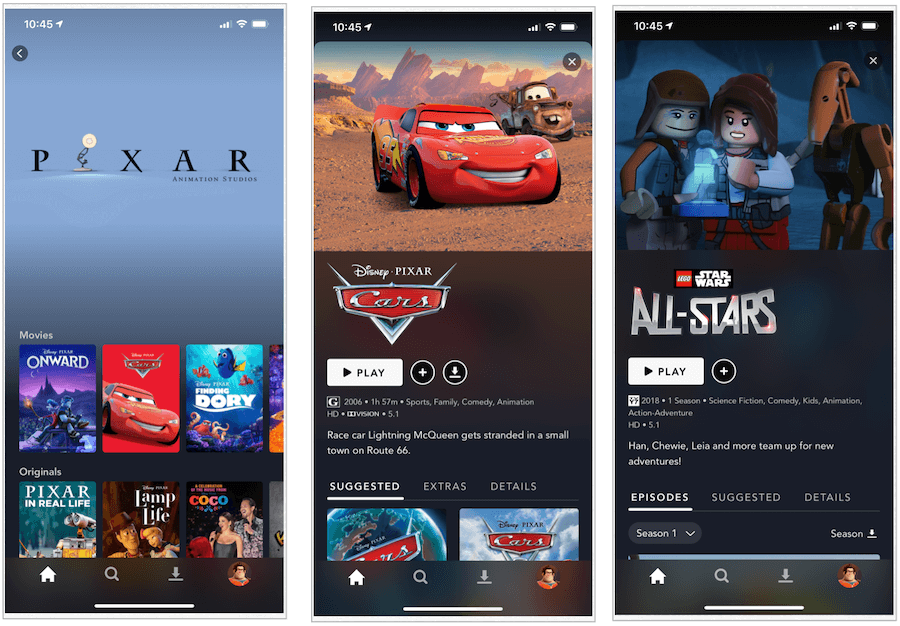 Those under the age of 10 will graduate to content from Pixar, Walt Disney Animation Studios, the Disney Channel. Star Wars and some Marvel titles are also appropriate for this age group.

Independent until 2006, Pixar is known for its computer animation titles, including the Toy Story series, Cars, Finding Dory, and others. The studio’s latest title, Onward, is also here. Disney Plus also includes Pixar shorts that air before each feature film. There’s also original content, such as Lamp Life, Pixar in Real Life, and What is a Pet?

Disney wouldn’t be Disney without animation, and the company’s most iconic studio extends beyond princesses. There’s also Pinocchio, Zootopia, Bambi, Peter Pan, and hundreds of other properties.

Once a premium service, the Disney Channel launched in 1983. Since then, it has been the home to original first-run TV series, theatrically-released and innovative made-for-TV moves, and more. Most of this content is now also available on Disney Plus. Kids should check out The Wizards of Waverly, Big Hero 6 The series, and other titles.

The world of Star Wars doesn’t just consist of the nine motion pictures of the Skywalker Saga. There’s also live-action and animated television series, short films, and made-for-TV content. For younger viewers, we suggest starting with one of the series, such as Star Wars The Clone Wars or LEGO Star Wars All-Stars. The earlier feature films are also appropriate with parental guidance. The many shorts are also worth your time.

Animated Marvel series on Disney Plus are also suited for those under the age of 10. These include The Avengers, Superhero Squad Show, and Fantastic Four. The most family-friendly Marvel film titles include Ant-Man, The Avengers, Spider-Man: Homecoming, and Thor. 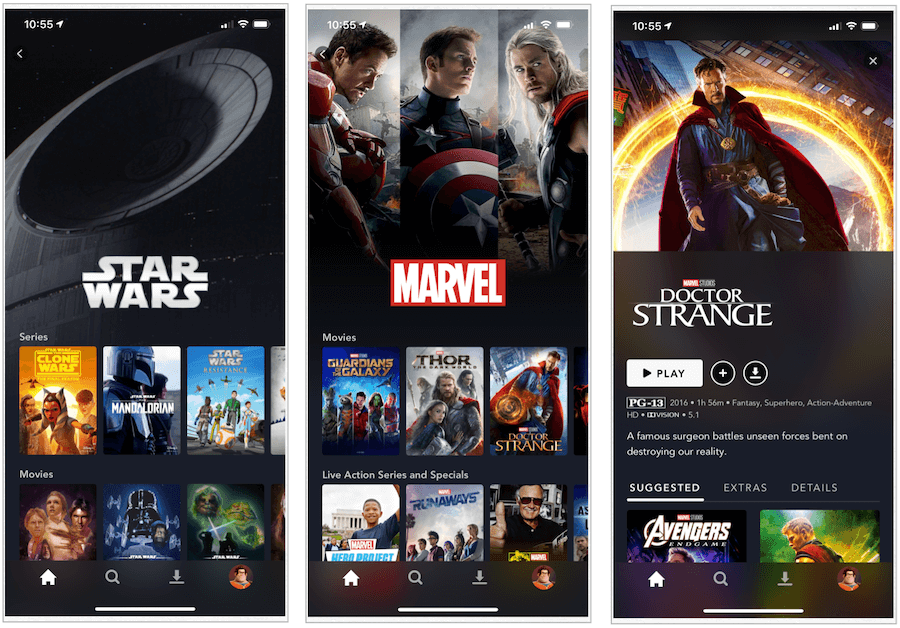 By this point, Star Wars and Marvel titles are hyper-popular with viewers, as are original and school-themed television series. Many of the live-action movies on Disney Plus also cater to this group.

Disney Plus will always be the eventual home to Star Wars movies and series. Besides the original films, check out the companion titles, including Rogue One and Solo. The first original series on Disney Plus, The Mandalorian is also must-see viewing for any Star Wars fan.

The Marvel Cinematic Universe (MCU) has made Disney lots of cash over the years and has brought hours of entertainment to viewers of all ages. This will only continue in the coming years as new films get released and make their way to Disney Plus. Those new to MCU should start with the first film in the series, Iron Man, then move forward at your speed. You should also check out the many live-action and animated series set in the Marvel universe, including Runaways, Hero Project, and Agent Carter.

The Disney Channel (and other outlets) has been the home to countless teen series over the years, which have now made a move to Disney Plus. These include Hanna Montana, Jessie, Boy Meets World, and others. You’ll also find made-for-home films like the Descendents series.

Originals series created exclusively for Disney Plus include Star Girl, Diary of a Future President, and High School Musical: The Musical The Series. 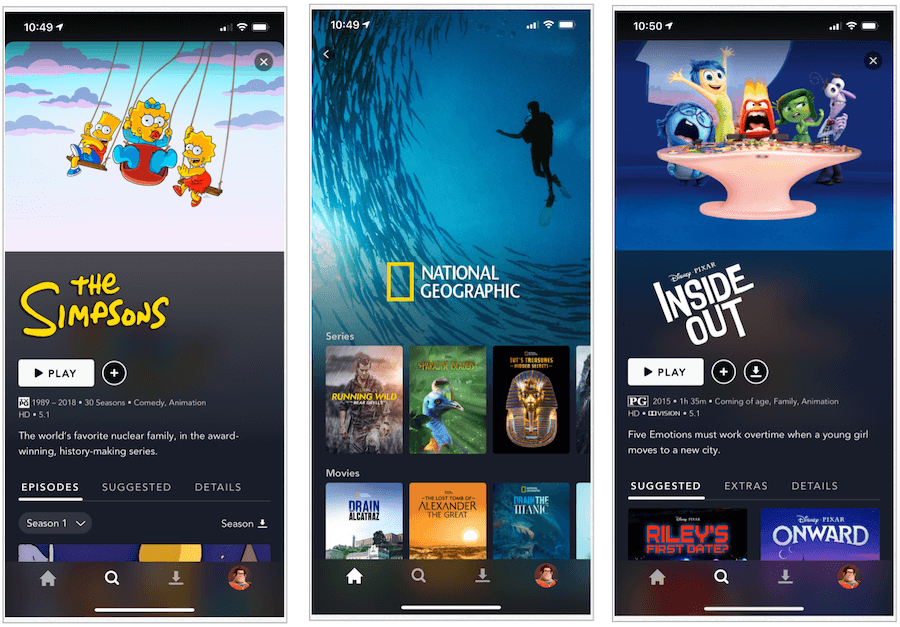 For older viewers looking for content that moves beyond Star Wars and Marvel, consider The Simpsons TV series, National Geographic titles, and a deeper dive into Pixar. It’s also worth noting here that if you only want young ones to see age-appropriate content you can enable parental controls for Disney Plus.

For real-life fare, check out the service’s extensive library of National Geographic series and movies. These include Paradise Islands, One Strange Rock, and Hostile Planet. Drain the Titanic and Dog Whisper are also available.

Finally, it’s time to circle back to Pixar. Though Pixar films are sold as kids-friendly (which they are), they’ve also been designed for the entire family to enjoy. Some of the movies over the years have been more adult-oriented thanks to tongue-in-the-cheek jokes and comments. These include Inside Out, Brave, The Good Dinosaur, among others.