Every year on the last Friday in November, millions of Americans surge through stores everywhere in search of some killer shopping deals.  Of the many, few are lucky enough to get in on some great doorbuster deals and score some nice loot at half price or better.  If you want in on the action, this groovy guide will help you get the most out of this national shopping day.

This could be your first Black Friday or it could be your 20th, either way we’ll cover some basic information so that everyone is up to speed.

What is Black Friday?
The Friday immediately following the American Thanksgiving holiday.  It has become a tradition for stores to offer huge discounts on a wide variety of products that bring out more shoppers and generates more sales than some times the entire rest of the year combined. This day has been nick-named Black Friday because it is the one day retailers are guaranteed to make a profit, but also because there are so many people out for a deal that it is pure madness.

What is a “doorbuster?”
A doorbuster is when a retailer significantly reduces the price on a limited number of items for a short duration.  Doorbusters can happen any time of the year, but on Black Friday they are a little different.  On Black Friday there are more doorbusters than any other any other particular day of the year, and while still limited in quantity they are typically available all day long.

Where do I find out what each store is selling for Black Friday?
Black Friday ads are posted all over the internet a week or two in advance of the actual day.  However, some stores will wait until the day before Thanksgiving to release their ads.  You can find most of them from any of the resource links at the bottom of this guide.

How many people show up for Black Friday?
Millions.  Picture the busiest day you’ve ever seen at the mall, now double that.

Price-matching won’t work.
If you’re planning on buying an item ahead of time and price-matching it on Black Friday – don’t count on it.  Most stores don’t allow price-matches on this particular day, but the only way to be certain is to call ahead and check, just don’t tell them what you are planning!

What is Cyber Monday?
Cyber Monday is the Monday immediately following Black Friday.  It has become a tradition for online retailers to offer “doorbuster” deals and other steep discounts for those that didn’t participate or find any deals on Black Friday.

Wal-mart can be dangerous!

If you live in a densely populated area, you might want to steer clear of your local Wal-mart on Black Friday.  It seems like every year there is a news story of someone being trampled to death or worse because due to the insanity of Walmart shoppers looking for that “killer” deal. 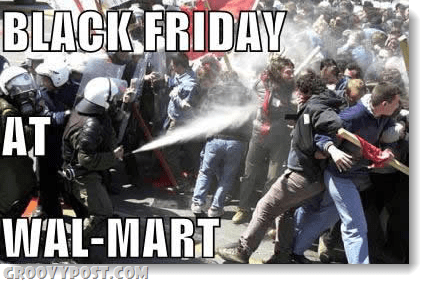 How To Shop Black Friday Like A Groovy Pro

That covers the basics, now let’s look at how you can get the most out of Black Friday and shop like a pro.

Step 1 – Figure out exactly what you want

You have to go into Black Friday from the correct angle.  If you’re just planning on going to a store and seeing what they have you’ll likely end up missing all the deals, at least the good ones anyway.  Look at all of the Black Friday ads ahead of time and narrow down everything you’d like to buy into a simple list.

If you can, it’s best to enjoy endure Black Friday from the comfort of your desk at home.  99% of the time if it’s Tech Deals you are after, the online shopping realm dominates prices on tech gear.  However, if the products you are after are marked “in store only” then you’ll have no choice but to venture out and buy them in person.  This is usually the case with doorbusters, and I know it!  I’ve personally waited in line outside of many different stores just to take advantage of a great price on only one item.  When this happens see if there is anything else in that store you might want and if there are any nearby stores that have things on your list so you can easily jump over and minimize your time in traffic.

Step 3 – The early bird gets the deal

Be ready to wake-up early, maybe even at midnight.   For online deals, many of them go live at 12:00am EST or whatever their headquarters local time is.  Be sure to check exactly what time they start their Black Friday deals and be at their site(s) a minimum of 30 minutes early.  Remember, on Black Friday time means money, deals sell out almost instantly so you need to be the first one there if you want to get anything.  If you are venturing out to retail stores, it’s a good idea to show up a minimum of 1 hour and 30 minutes early.  Typically people start lining up outside the store and deals are first come first serve.  Depending on where you live, how populated the area is, and how popular the store you are going to is, you may want to show up even earlier.  Trust me, there will probably even be some crazy people there who brought sleeping bags and have been there since the previous night.

Last year I showed up at my local Staples 1 hour and 45 minutes early (4:15am) and I was able to purchase every single Doorbuster deal they had.  Despite being early, I was still 10th in line.

Whether you are shopping online or in-store, a shopping partner will make the entire event extremely easier.  Most brick and mortar stores will only allow you to buy one deal per customer (the online equivalent is one deal per shipping address or credit card).  Having a friend come along will increase your chances of getting the deal, perhaps even doubles, and you’ll have someone to hold your spot in line if you have to pee.

Black Friday is not for kids.  Think about how miserable they would be waiting in line outside of a store at 4:00am, and people can get crazy – you wouldn’t your children getting hurt.  Not to mention, most stores won’t count your kid as a “customer” unless they are old enough to purchase the item for themselves.  So if you are planning on using your small children to get you twice as many discount Blu-ray players, shame on you!

Step 6 – When all else fails, try Cyber Monday

Maybe you didn’t feel like going out in the madness on Friday, you missed the deals, or the online shopping was equally as bogus.  Either way, you could try to wait it out and catch the deals on Monday.  From my experience, the Cyber Monday deals are harder to find but they can be just as good.

Black Friday is an exhilarating day to shop, but other shoppers aren’t the only thing you need to be worried about.  Pickpockets, car thieves, and credit card skimmers also consider it a day to make a profit.  Hopefully you won’t encounter any of them, but click any of the above links to learn how to take the prevent yourself from becoming a victim.