Starting November 10, for the next two months Google will be providing free Wi-Fi access in in many major US Airports as a “holiday gift.”  Virgin America has teamed up with Google and is the only airline that will give out free Wi-Fi access during the entire flight.  The deal will run until January 15, 2010, and several airports, including Burbank and Seattle, will continue the free Wi-Fi service indefinitely.

Being a regular traveler, this has me very excited as the standard Wi-Fi connection will cost you anywhere from $6 to $15 depending on who the carrier is.  While that doesn’t seem like much, for someone who just wants to check their email it can be pretty steep.

According to the FAA, hundreds of millions of people will be traveling during the busy holiday months coming up.  In short, Google just made a lot of people a lot less bored while waiting around at the airport.  If you’re not familiar with WiFi, take a look at this groovy article for instructions and safety precautions.

There is a Photo Contest!

Google is holding a Photo Contest for anyone flying from November 16, 2009, to January 15, 2010!  I don’t have any details yet on what the prizes will be, but you can sign up for automatic contest updates at http://www.freeholidaywifi.com/photo-contest/.

I’ve recently flown on 10+ Virgin America flights, and my overall experience has been very groovy.  Each time though I’ve always been reluctant to dish out the extra dough for their “GoGo In-flight WiFi.”  The inside of a VA plane is similar to something you would see on a late 1990’s science fiction film, except you have your personal TV screen for every seat.  The screen is equipped with the “Red Entertainment” media platform (which runs on Linux!), and each screen even includes a remote control/gamepad hidden away in your armrest.  Being one of the slickest and most inexpensive airlines to fly on, I give this deal two groovy thumbs way up. 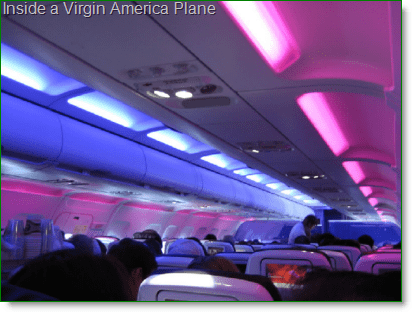 Which airports will be offering free WiFi from Google?