Since the Windows 8.1 Update 1, the OS can detect if you’re running it on a traditional desktop with keyboard and mouse, or one with a touch interface.

This was a good move by Microsoft as the company has made Windows 8.1 easier to use for traditional desktop users.

However, some of you might like to use the Modern UI and would rather have Windows boot to the Start screen like it did before the update. If you’re one of those folks, here’s a look at how to make it boot the way it used to.

Boot to Modern UI in Windows 8.1

Making Windows 8.1 with Update 1 boot to the Start screen instead of the desktop is a simple process. Right-click on the taskbar and select Properties. Then select the Navigation tab, and under Start Screen, uncheck “When I sign in or close all apps on the screen, go to the desktop instead of Start” and click OK. 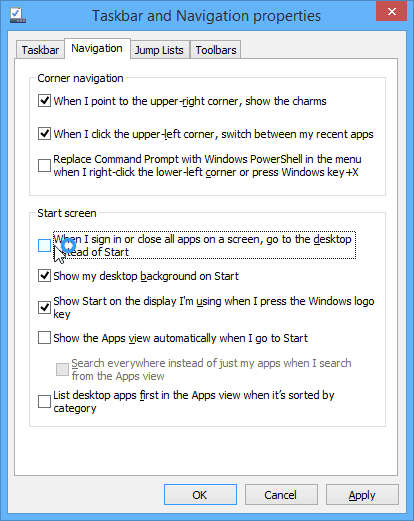 Now the next time you reboot your computer, it will go directly to the Start screen with all of your Modern apps. Personally, I wouldn’t set this feature on my desktop computer or laptop. But it’s a nice feature if you’d rather live to see your live tiles first.

Looking Back at Windows 8 Booting to Desktop

During Windows 8, we covered different ways you can boot directly to the desktop. From installing third-party utilities like free Classic Shell or Start8 from Stardock (which also gives you a Start menu). We’ve shown you how to do it with other system tweaks such as using Task Scheduler.

With Windows 8.1 you could do it by simply checking a box in Navigation Properties.

Now with the 8.1 Update, Windows can automatically detect if you’re computer is traditional or includes a touch screen. Instead of getting the Modern UI shoved down your throat, It’s Microsoft has finally (after three updates) got the OS where the majority of consumers would like to be – at least with the boot to desktop part.