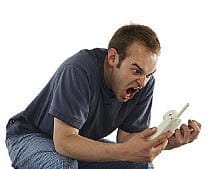 Apple is adding a feature to iOS 7 that iPhone that users have wanted for a long time — the ability to block unwanted calls. Here’s how it will work.

New in Apple’s upcoming iOS 7 is a feature that allows you to block unwanted calls easily. It works like a charm, and it’s about time that Apple integrates this into its operating system.

Note: iOS 6 lets you set up what’s essentially a “white list” of calls that will come in when you’re in Do not Disturb mode. But this is a whole new feature that will let you block callers anytime!

If you have unwanted calls from crazy exes or bill collectors that just won’t stop with those harassing phone calls, here’s what you do to stop them — when you update to iOS 7.

1) The first thing to do is go to your call history by launching the phone app and tapping on Recents. It’s that little clock icon.

2)  Now you will need to scroll and find the number you want to block. Tap the “i” icon for information on that call if you need it. 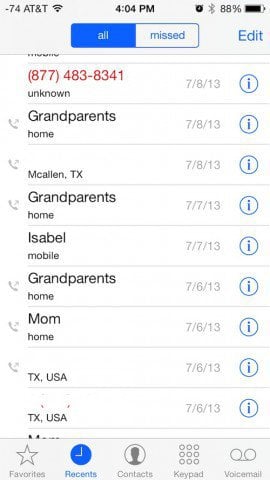 3) After that, scroll down and find the “Block this Caller” option and tap on it. 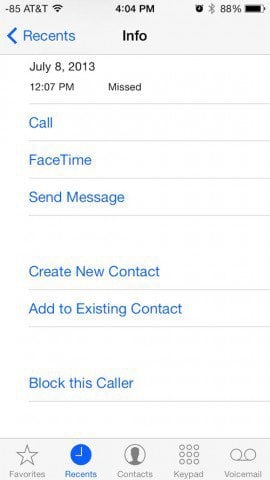 4) Now you will see a prompt asking if you want to block that number — Tap Block Contact. 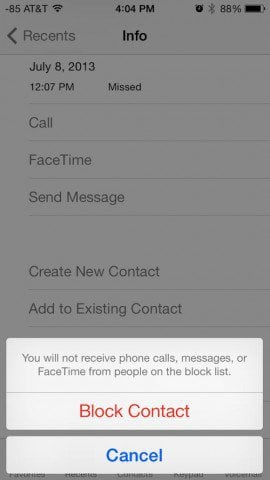 5) The contact is blocked! You can unblock it at any time later, but who’d want to do that? Especially if it’s your psycho exes are trying to harass you. For some people, I imagine this update can’t come soon enough! 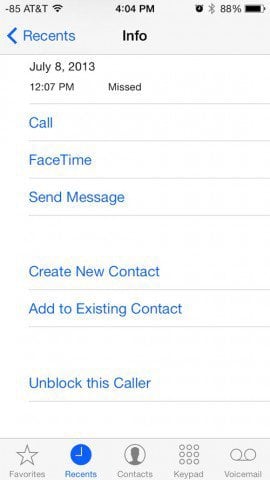 In fact, it looks like when the official version of iOS 7 is released, the blocking doesn’t just stop with phone calls and texts. According to the Apple Press Release, it the Additional New Features section, it lists the following:

Phone, FaceTime and Messages blocking to prevent specific people from being able to contact you.

So not only will you be able to avoid annoying telemarketer and other harassing calls, you can stop all forms of their communications on your phone.