Would you like to play custom sounds in Discord at the push of a button? Learn more about some of the best soundboard apps for Discord here.

We’ve all been there. Someone makes a terrible joke in Discord, and you wish with all your heart that you had a ‘badumtish’ sound effect lined up and ready to go to put them right back in their place.

Well, with a soundboard, you can do exactly that. You can use soundboards to play sound effects in your Discord channel, set up hotkeys to play your favorite sound effects at the push of a button, and even use them to change your voice.

There are plenty of soundboards out there to choose from, but don’t worry; we’ve got you covered. Here’s the lowdown on some of the best soundboard apps for Discord. 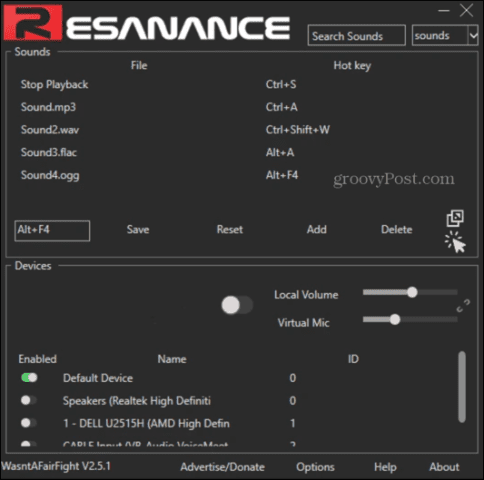 Resanance is one of the most popular soundboard apps for Discord. It’s no surprise—Resanance offers a great set of features and is completely free. It supports the MP3, WAV, OGG, and FLAC file formats.

You can set up your own hotkeys or a customizable deck of buttons to trigger the sounds. It’s also possible to set the volume of each sound independently.

You can use the in-built text-to-speech function to get Resanance to say anything that you type. And if you think of a feature that you wish were included, suggest it and you may see it added to the app. 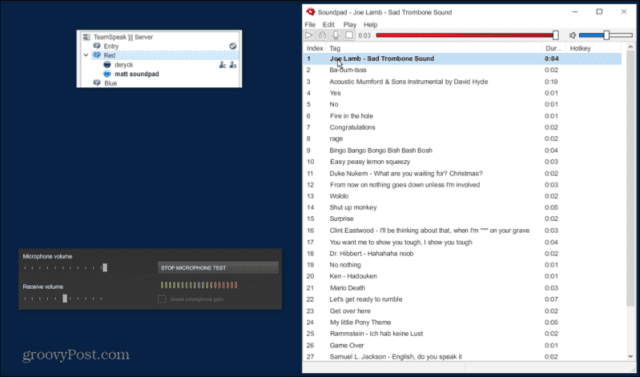 Unlike Resanance, Soundpad is a paid app. However, there is a free trial version where you are limited to adding and playing a maximum of ten sounds before having to restart the app.

The paid version allows you to set hotkeys for each sound file and use the sound list to trigger each sound. One very useful feature of Soundpad is that it offers volume normalization. This ensures that all of the sound files match the volume level of your voice. There’s also a sound recorder and editor that allows you to create your own sound files. 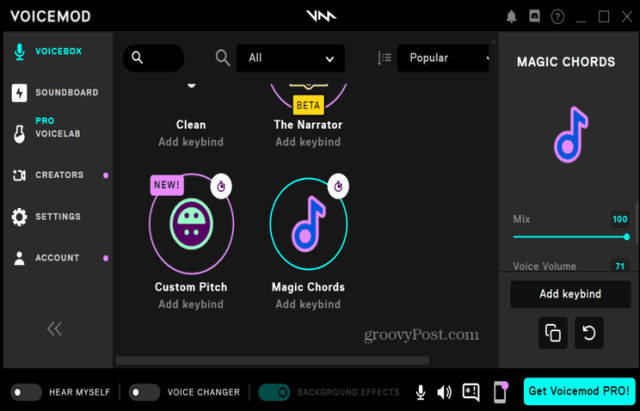 Voicemod offers a free version that provides access to 10 different voices that rotate every day. Upgrading grants access to over 100 voices. As a Pro user, you can also create your own voices using the VoiceLab.

The price for a Pro license is tricky to nail down because it is constantly changing. There are regular discounts on the lifetime license, or you can opt for a monthly price that can be paid in quarterly installments, or annually.

Voicemod currently only supports uploads in MP3 and WAV formats, and it is no longer supported on Windows 7, 8, and 8.1. 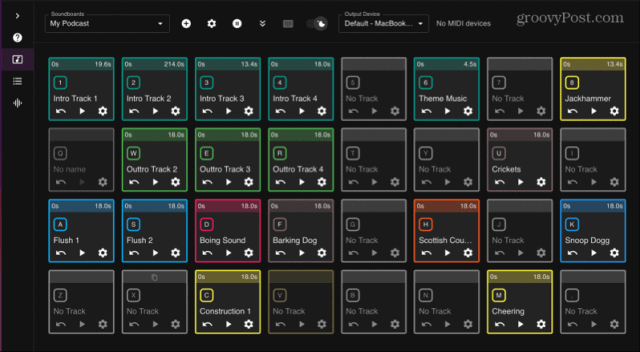 Podcast Soundboard is another paid app, but the price that you’ll pay depends on the operating system you’re using. Windows users will pay a one-off fee of $7.99. Mac users pay $4.99, which is the same price as the mobile apps. You can use the web version for free, but if you want to use unlimited sounds, you’ll need to pay a monthly fee of $4.95.

You may be tempted to splash out, as this is one of the best soundboard apps for Discord. The main interface allows you to build a soundboard of tiles that you can set up to play from the start, loop, or fire multiple times. You can set the volume level for each tile, and even color code them to help you find the right tile more quickly. The interface is ideal for use on tablets and smartphones. 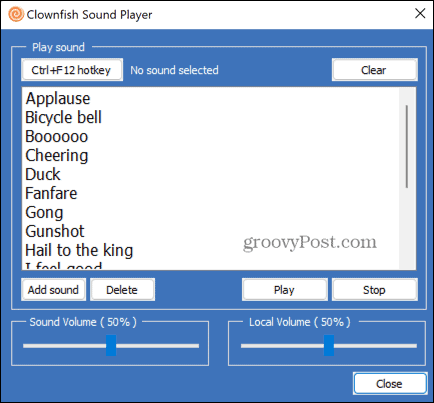 Clownfish Voice Changer is intended to change the sound of your voice, with a selection of voice effects such as pitch changing, robot voices, or aliens. It also includes a sound player to play sounds by clicking or setting up a hotkey. There’s also a text-to-speech option that allows you to select from a range of voices.

Whilst it doesn’t have the range of features of many of the other soundboards on this list, if you’re just looking for a few simple voices and the ability to upload and trigger custom sound effects, then this free option is a great choice. 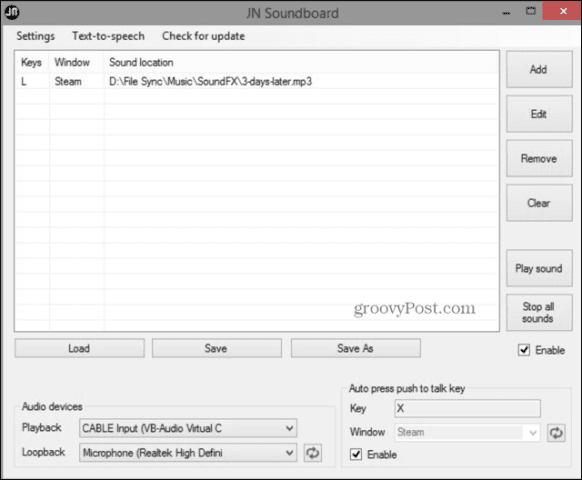 With JN Soundboard you can set sounds to specific hotkeys. You can limit those hotkeys so that they only function when a specific window is in the foreground. It means you don’t have to worry about accidentally setting off those same sounds when you’re chatting to Aunt Doris on Zoom.

Other useful features include the ability to create hotkeys that stop the current sound from playing and randomly play for a selection of sound effects. There’s also a text-to-speech option included. 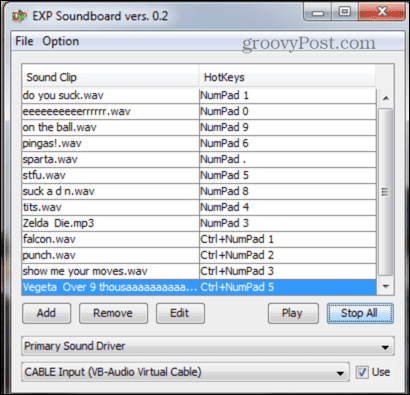 EXP Soundboard works with fewer different file types than JN Soundboard can. That said, it does include a converter tool that can convert most audio files into a compatible file type. Unlike JN Soundboard, EXP Soundboard is also available for macOS and Linux, so if you’re not on Windows, it’s a great choice. This is one of the few soundboard apps for Discord that caters to Linux users.

As with JN Soundboard you can create your own custom hotkeys to play the sounds that you upload. You can also set up a hotkey to modify the playback speed of your clips.

The EXP Soundboard supports the MP3 and WAV file formats. 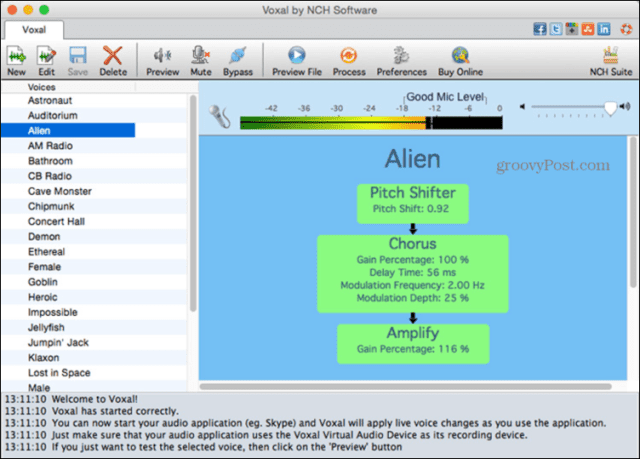 As the name suggests, Voxal Voice Changer is a voice changer rather than a soundboard. You can’t upload sounds to play at the push of a button, but you can alter the sound of your voice using the range of included pre-sets such as a robot, girl, atmospheric, alien, and many more.

You can create your own custom voice effects by creating chains of built-in effects such as distortion and pitch shift or set up hotkeys to quickly and easily switch between the different voices. It’s also possible to apply the effects to existing voice recordings. Voxal Voice Changer supports MP3 and WAV file formats. 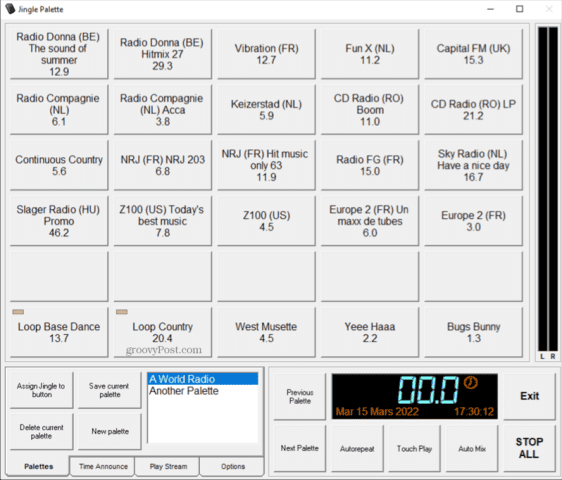 With Jingle Palette, you can create a soundboard palette of up to 30 jingles that can be activated at the press of a button. You can create multiple palettes that you can preload and navigate through directly in the app. It’s also touch-screen compatible, meaning you can launch the jingles with your fingertips if you have a touch-screen computer.

Once you’ve chosen the right soundboard for your needs, there are a few steps you need to make to set up your soundboard for Discord, and then you’re good to go.

Using soundboard apps for Discord is just one way to make your Discord server a more engaging place for people to come. There are plenty of other things you can do to attract people to your server and keep them coming back.

For example, you can create an event on Discord to bring people together on your server at the same time. You can play music in your Discord channel to provide some accompaniment to all your soundboard effects. It’s even possible to stream Netflix on Discord so that you and your friends can watch the latest hit show or an old favorite together.