There is a lot of Apple Pencil-supported apps on the App Store, with many more added each year. Here are some of the best.

To take your iPad to an all-new level, consider using one of the many apps that now support Apple Pencil. Though primarily geared towards creatives who like to draw and take photos, the input device is also great for note-taking and marking up documents. Here are our favorite Apple Pencil apps for 2020.

What is Apple Pencil?

First introduced in late 2015, Apple Pencil is a lineup of two wireless stylus pens created for select iPad and iPad Pro models. The first-generation model charges via a Lightning connector found inside its removable cap. At the same time, the second-generation device offers a magnetic connector that charges when attached to the side of a supported tablet.

Both accessories provide pixel-perfect precision and tilt and pressure sensitivity, while the newer model offers a double-tap to change tools provided in supported apps.

You can use the second-generation model with the iPad Pro 12.9-inch (3rd and 4th generation) and iPad Pro 11-inch (1st and 2nd generation).

Apple Pencil (2nd Generation), White
It makes painting, sketching, doodling, and even note-taking better than ever.
$129.00

Amazon.com Price updated on 2022-07-01 - We may earn a commission for purchases using our links: more info

The Apps: The Best

The apps mentioned below work with both Apple Pencils on the market.  Each is highly rated on the App Store. 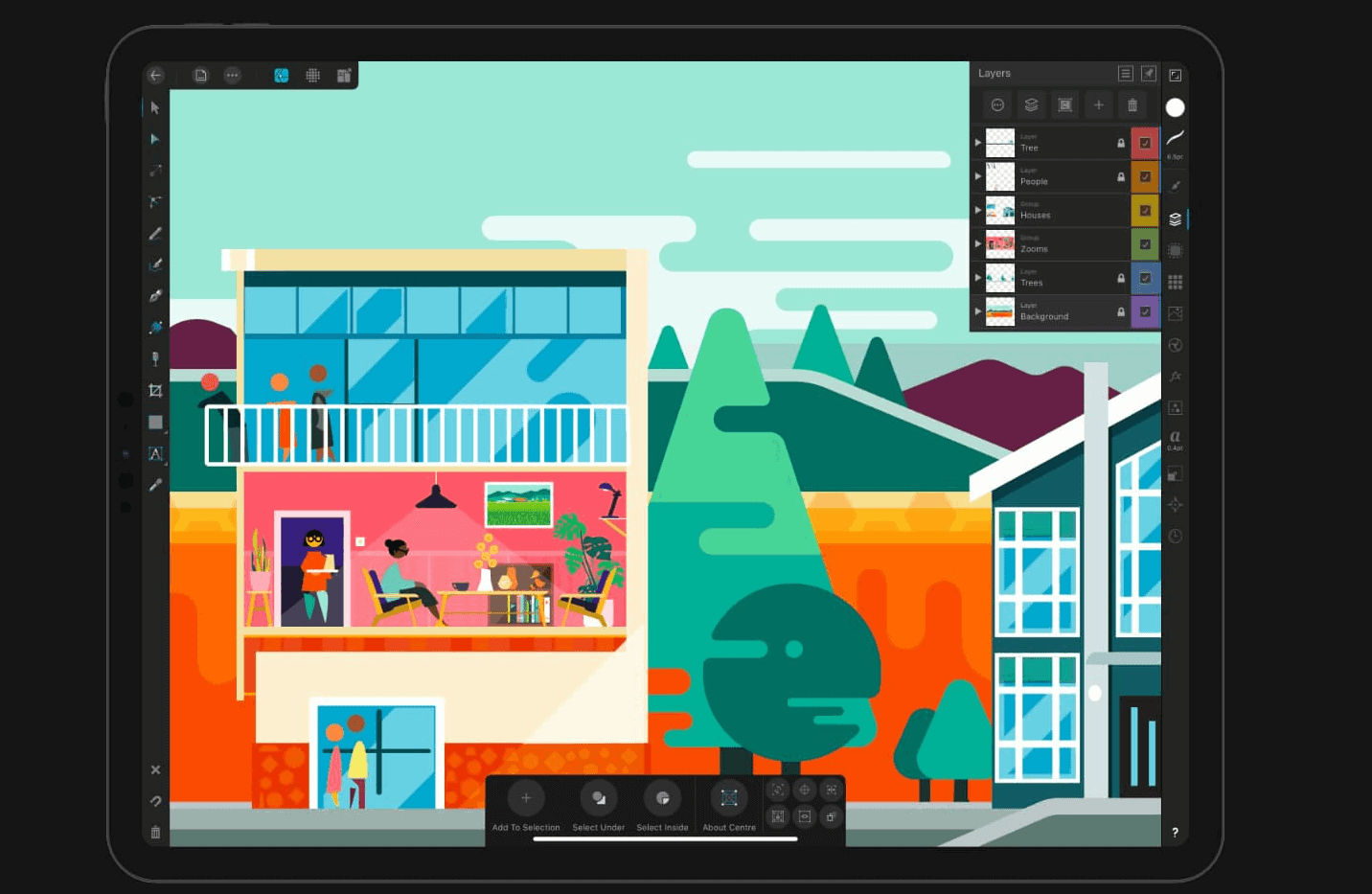 Created by Serif Labs, Affinity Designer is mostly built on the Mac app by the same name. You can use it to create illustrations, icons, typography, websites and print projects, concept art, and more.

Notability is a great note-taking app that nearly duplicates the pencil-on-paper experience. With built-in PDF annotation tools, your thoughts about a subject or idea will never be lost, thanks to the app’s ease of use. For added flexibility, Notability includes support for voice notes and can convert handwriting to text.

With iCloud sync, you can begin writing on your mobile device and continue doing it on the separate Mac app. With auto-backup, your notes are always there for archiving and recovery through services like Dropbox, Google Drive, Box, and many more. 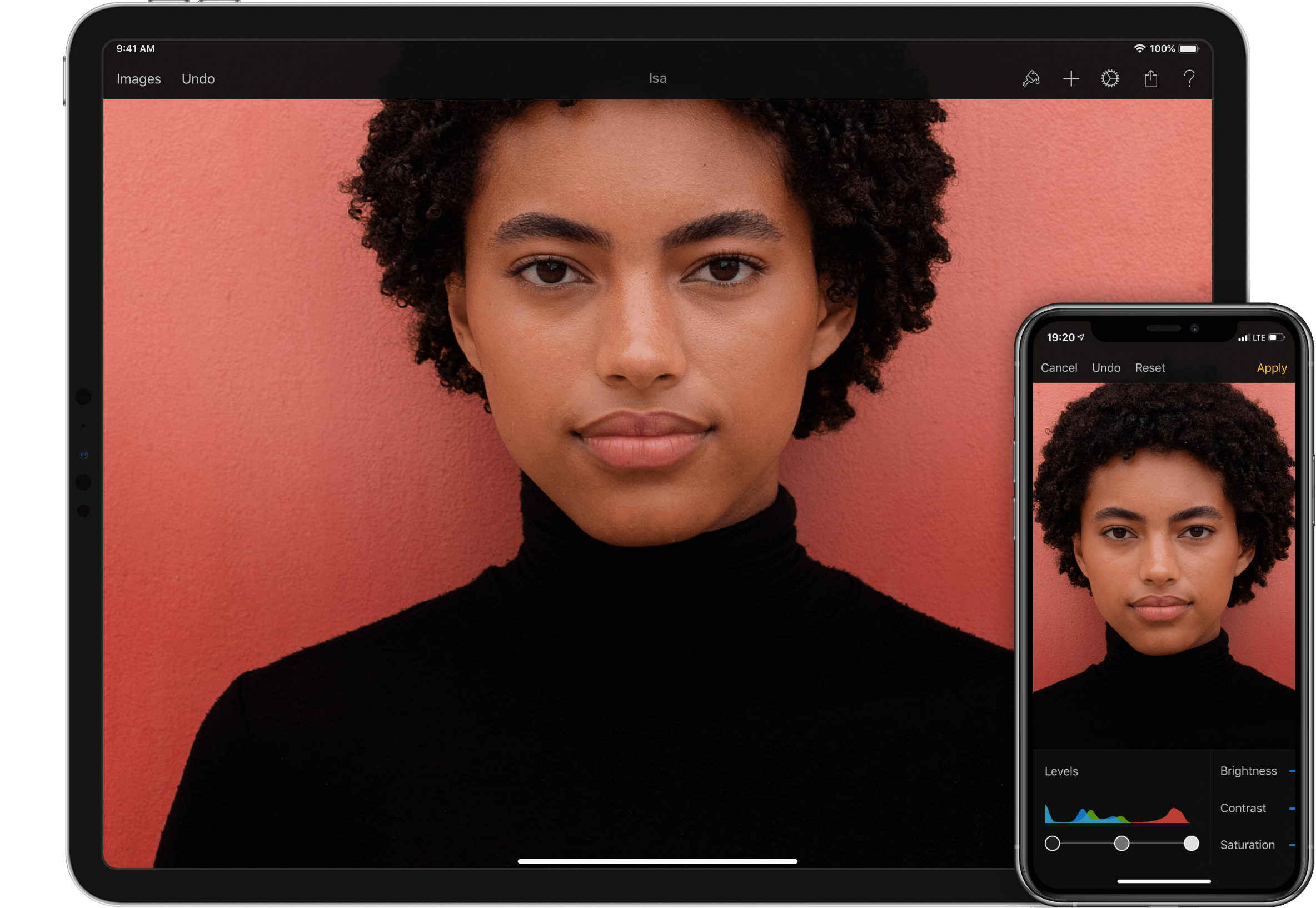 Another creative app that made the jump from Mac to iOS/iPadOS, Pixelmator, is a full-featured image editor that lets you create, edit, and enhance any photo on the fly. Unlike industry-leading Adobe Photoshop, this app doesn’t require a monthly subscription.

Tools include the ability to enhance image colors using pre-designed adjustment presets, levels, curves, and more. You can also use the app to remove unwanted objects, reshape areas, clone, blur, and more.

The universal Pixelmator app works seamlessly with its big brother over on Mac and can also work open, edit, and save Photoshop images with layers. It supports PSD, JPEG, PNG, HEIF, and other formats and can save files directly to your Photos app or in iCloud. Images can also get posted to social networks, including Flickr, Twitter, and Facebook in-app.

Developed by Savage Interactive, Procreate has long been popular with professionals and amateurs who want to draw masterpieces on their favorite tablets. With hundreds of built-in brushes and innovative artistic tools, the app offers an intuitive interface and a full-featured layering system.

Like Pixelmator and many other apps, Procreate is updated often to bring more features online. There’s also a separate Procreate Pocket app for iPhone. 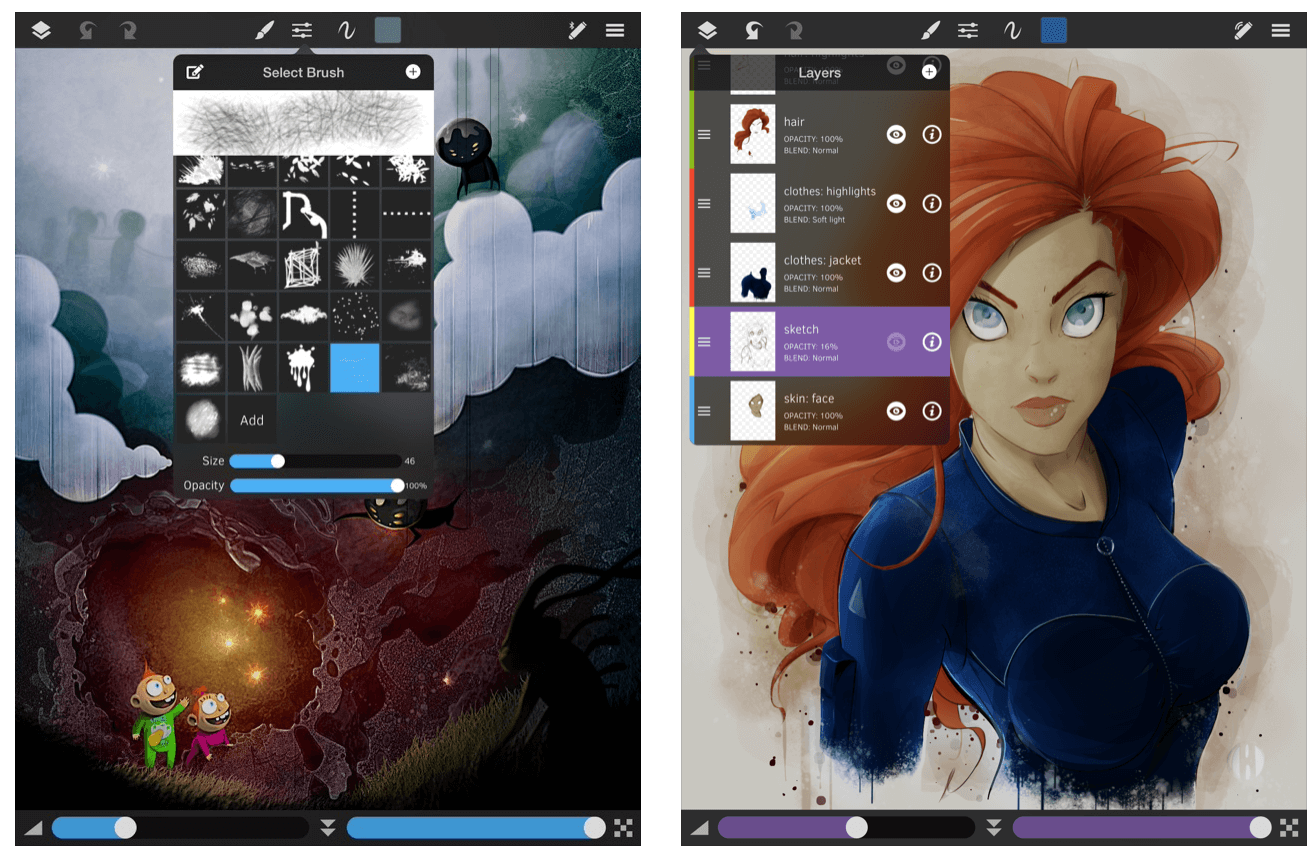 Well-received by pros and novices alike, Sketch Club has long been known for its versatility and low price. Use it for drawing, painting, typography, and photo correction/manipulation.

Sketch Club is also a community. You can follow other artists and gain followers when sharing creations. There are also daily challenges and competitions, all designed to make you a better artist.

First launched in 2019, Adobe Fresco is a free drawing and painting app that takes advantage of the latest stylus and touch devices. With Adobe Fresco, you can paint with watercolors and oils and blend them at any time. A premium version adds more features and gives you access to the iPad version of Photoshop.

Not surprisingly, the official Notes app on the iPad works very well with Apple Pencil.  You can use the input device to quickly sketch right in your note using various free brush styles and colors. Scribbling and drawing have never been easier!

Now free to everyone, SketchBook by Autodesk provides fast and powerful creative sketching tools for anyone with an idea. It supports the double-tap functionality of the second-generation Apple Pencil.

The freemium Clip Studio Paint for iPad is ideally suited for drawing, painting, comics, and animation. There are also other versions for Windows, macOS, and iPhone. All functions are usable for up to three months for free. 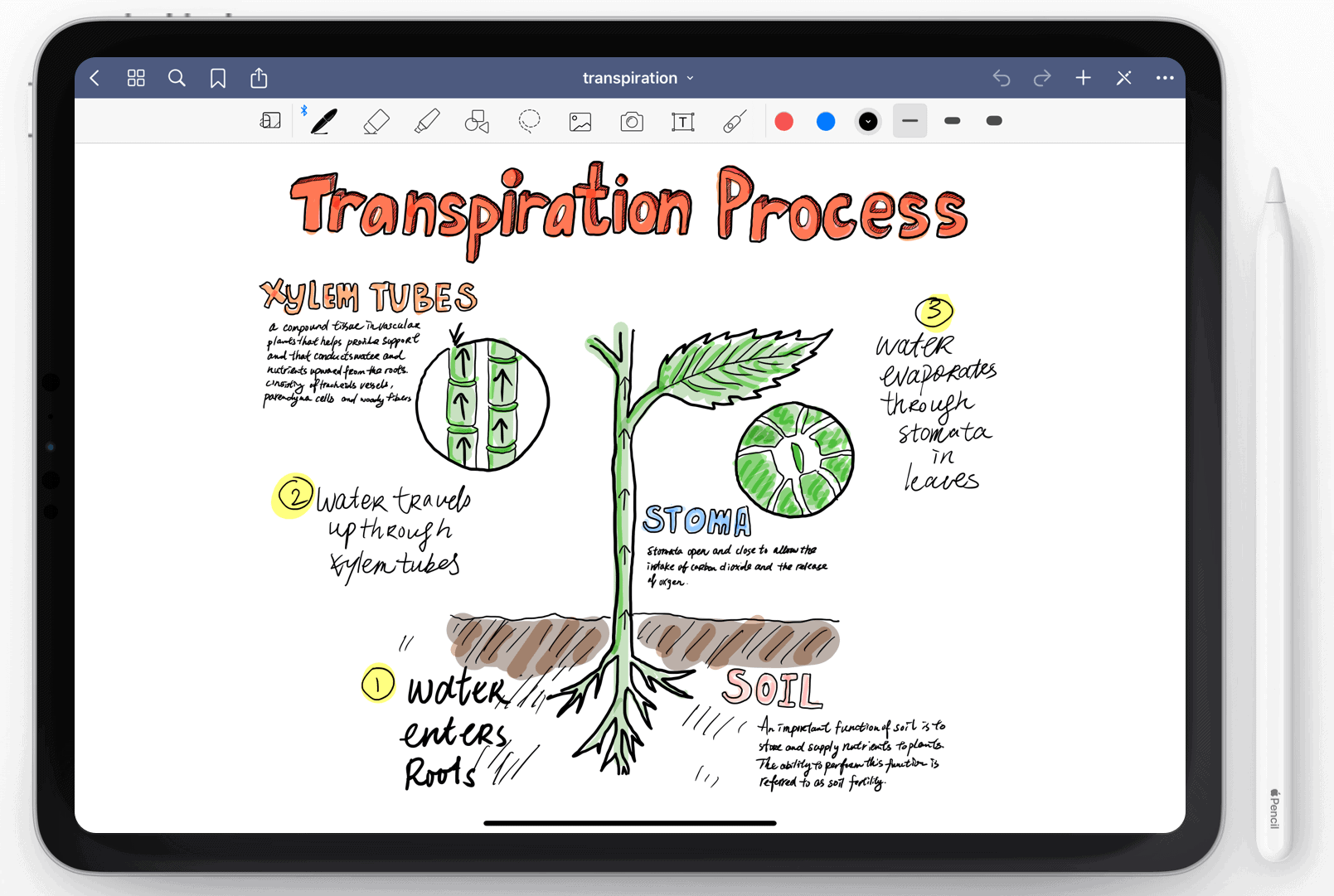 Offering powerful OCR technology, GoodNotes offers terrific search capabilities, so you can always find your handwritten notes, PDF text, outlines, and more. With built-in document management, you can use GoodNotes to store all of your files, including PDF, Word, and PowerPoint files. The app is also available for iPhone and Mac.

From The Iconfactory, Linea Sketch is another all-in-one solution for drawing and taking notes. The app is simple to use and packed full of useful features.

Windows-based computer users who also own an iPad will want to consider Microsoft OneNote, which syncs easily between platforms using OneDrive. With the app, you can capture your thoughts, discoveries, and ideas, then save, share, and collaborate whenever you want.

Another note-taking app, Nebo, is suited for both professionals and students. It features handwriting recognition in 66 languages and counting. You can also add interactive diagrams, editable equations, freeform sketches, and annotate pictures.

For iPad, iPhone, and Apple Watch, this trusted app is excellent for fluid handwriting and marking up documents and images. There’s also the ability to record audio notes. There’s a lot to see here and you should, because it’s the price of admission!

Apple Pencil isn’t just for business and school use. It’s also an excellent tool for when you want to relax and color. The Pigment app is one of the most popular adult coloring books for iPad (and iPhone). It offers a great way to pass the time and relax, whether on a Saturday afternoon or right before bed. To date, it includes over 5,000 professionally illustrated pages.

There are many Apple Pencil-supported apps on the App Store, with many more added each year. Whether you’re looking to draw, write, or take notes, the apps above are the ones you should consider first. Happy creating!