You’ve had that old rusty computer forever, but you just opened up a brand new box with a shiny new Dell, HP, Gateway, etc, inside.  You probably want to start using it right away, for work, games, social networking, reading groovyPost, etc.. Below is a quick reference Step-by-step for getting your new system optimized and loaded up with groovy software fast and easy.

Update: This article was written for Windows 7 (which is no longer supported) and Windows 8 which has reached end of mainstream support.

On Windows 8, according to Microsoft:

Chances are if you bought an HP, Dell, Gateway, Toshiba, or any other pre-manufactured computer, it will come completely loaded with un-needed, bloated, crapware.  Crapware is defined as “Software that is near useless, slows down your system, and was installed only because the manufacturers receive payment for pre-loading it on all of their computers.  Normally it is only the DEMO copy that will only allow you to do something interesting if you pay the software company another $30 for the “Premium Edition”.  Another tactic these pre-installed apps like to take is they give you a free 90 days install but after that, they force you to subscribe and pay an annual fee for the privilege of leaving them on your computer.  Yeah…  no.  Time to get busy!

Some programs purposely make it difficult to scrape them off your box which is why the first step to any new system is to download and install Revo Uninstaller.  Revo makes quick work of any pre-installed crapware on your new box while at the same time regain a little control over our system and freeing up resources. 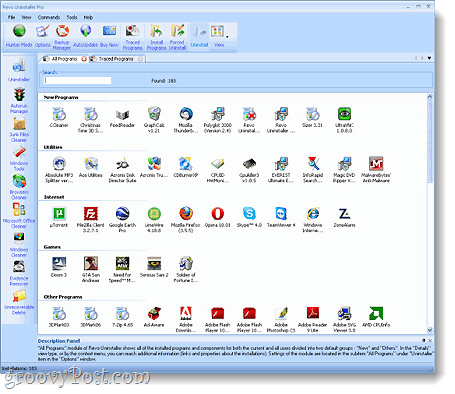 Normally included with new systems is a demo or 30-day eval of McAfee, Norton, or Trend Micro. Hopefully, you uninstalled them in Step 1 with Revo.  If not go ahead.  I’ll wait here.

OK, now that you’ve blown them away, Go download and install a great Anti-Virus package that’s optimized for Windows.  Which AV Suite am I talking about?  Microsoft Security Essentials of course.  It’s fast, efficient, and FREE.  I just did a write-up on MSE 2.0 so if you’ve not installed it before, go take a read there.

Why should I run Anti-Virus Software?

Well, over a billion people use Windows and because of this, it’s the most targeted operating system for virus code and other malicious software attacks.  Does this mean the Windows OS is any less secure than the Apple MAC?  No.  Think about it.  If you’re going to write virus code, are you going to write it for 90% of the population or 10% of the population?  Where will you get the most bang for your time?  Windows of course.  So, just because the “bad guys” focus on Windows instead of the MAC doesn’t mean it’s any less secure.  I would actually go on record to say Windows is MORE secure than the MAC because of the constant attacks and security patching Microsoft has made to their OS.

Anyway – just make sure you get AV installed and you should be OK. 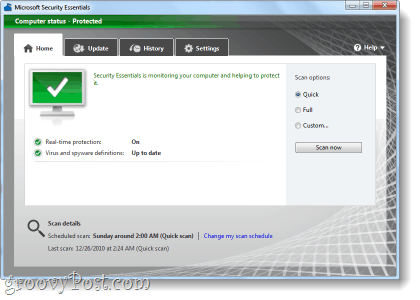 In order to get the most out of your new computer, you’ll need some programs, and good ones at that.  This is where ninite.com comes into play.  The ninite page features a gallery of software that is both useful and best of all, free.  Visit http://ninite.com/ and select which programs you’d like, but you probably won’t need more than 1 per category.  Once you’ve chosen which apps you want, just Click Get Installer and Ninite will package all the software instal a single installer, and install them all automatically.  Oh yeah…. Very cool!

We’ve also prepared numerous reviews of groovy Freeware that is available to everyone at no charge however here’s a quick list of my favoriate apps off Ninite which you should grab while your there: 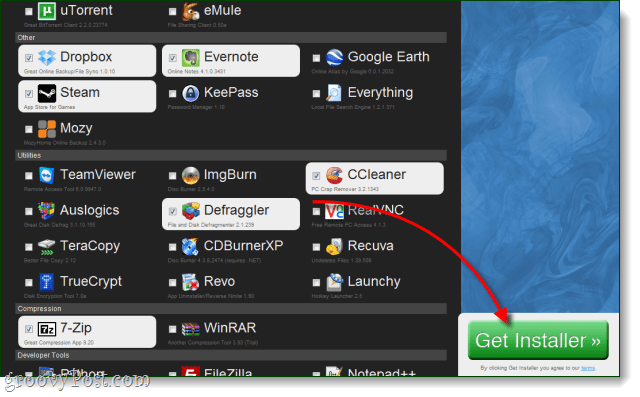 Getting through the steps about should be good enough for the first few hours of your new computer life.  Take the next few days getting familiar with some of the Apps I’ve mentioned above such as Dropbox, Evernote, and Picasa. If you’ve never heard of them before, do a search here on groovyPost as I’ve written in-depth about most of them.