Read and shop fast because effective Monday, June 7, At&t will be killing their rather groovy Unlimited data plans for the iPad, iPhone, and other Smart Phones.  New users will be stuck with their new plan, which is going to limit data usage to 2GB per month for $25.  Really?  2GB per month??  What do they think this is, 1998 where 2Gigs of memory used to cost $1200.00?

Personally, 2GB per month is a far cry from the amount of data I consume every month on my iPhone.  I imagine that in the case of an iPad, it will go even quicker since it has the larger screen and the primarily use is for VoIP, video, images, music, and other media.  If you take a look at our groovy article on internet connection speed, it can give you a good idea of just how little 2GB per month is. But in short, it’s barely enough to stream one full feature film (depending on compression.)

The optional 3G Unlimited data plan went for $30 per month on the iPad, and about the same price on the iPhone.  The difference is on the iPhone the $30 per month plan was mandatory based on a 1-2 year contract which is typical I guess unless you’re familiar with At&t’s exceptional half-baked 3G coverage. However, the iPad was always based on a 30-day contract.

Here’s the good news (at least for a few more hours.) If you order the 3G iPad by June 6 (tomorrow,) you are grandfathered into the unlimited data plan.  At&t made a groovy move, and they are honoring their agreement with everyone who is already on unlimited data and keeping it live for them as long as you purchase your iPad by 11:59 PM June 6th! 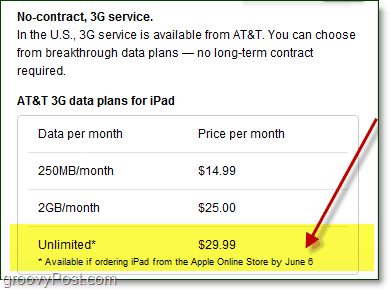 If you order the iPad on June 7, you’re too late.  All new customers will be stuck with the new plans; that is if you still want to keep At&T.

At&t claims that the new plans will further benefit their customers by lowering costs, since “the majority of customers use less than 2GB per month” anyway.  If you ask me, At&t is trying to cut costs AND boost profits as they know the iPad is a game changer and will soon be driving huge bandwidth across the net.

So with that said, if you want to get in on that sweet unlimited data plan for the iPad you have to order sometime between today and tomorrow!  The same goes for iPhone users too. But At&t plans on not honoring the grandfathered-in data plan for the new 4G iPhone coming out this summer, which is probably the REAL story here!