Apple now offers its Apple Card that is like a regular credit card but offers plenty of other benefits other cards don’t provide. Here’s what you need to know.

What is the Apple Card?

First announced in March 2019, Apple Card began rolling out in the United States the following August. To date, it’s only available in the U.S., although it might arrive in other countries in the future. Apple Card’s debut coincided with other service-related product launches, including Apple TV+, Apple News+, and Apple Arcade.

With Goldman Sachs as the issuing bank, Apple Card is available in physical and digital form. With approval, you get instant access to your credit line, which you can use across many devices. The physical card arrives a few weeks later in the mail. Made of titanium, the card has no card number, CVV security code, expiration date, or signature printed on it. Instead, it features only an engraved logo and your name on the front.

First, there are no fees associated with the card. These omissions include late, cash advance, international, overdraft, or annual credit card fees. Interest charges, which happen when you carry a balance from month to month, are included, however. As of December 2019, the Apple Card’s Variable APRs range from 12.49 percent to 23.49 percent based on your creditworthiness.

These include a unique daily cash feature that works a lot like other cashback programs with one significant twist. The cash percentages you receive back on purchases arrive every 24 hours, not monthly like similar programs.

Since Apple Card first launched, the 3 percent cashback has been extended to other companies, including Nike, Uber, Uber Eats, Walgreens, and T-Mobile. Promotions available for a limited time only are also announced often. Additionally, during the holiday season 2019, Apple doubled to 6 percent the amount of daily cash you could receive for Apple purchases in-store and online.

Your Apple Card cashback, when received, is deposited into your Apple Cash card inside the Apple Wallet app. You can use the monies to pay part of your card balance, send to others through iMessage, or spend at retailers that accept Apple Pay. You can also transfer the money to your bank through a wire transfer.

Apple Card also offers a real-time financial analysis on the amount of money you spend using the card and how through the Apple Wallet on your iPhone. The face of your digital Apple Card also changes as you spend more money by category. Through the app, you can also access historical spending information and monthly summaries. There are also recommendations on how best to pay off your balance to avoid unnecessary interest. In total, Apple hopes this information will help users better manage their expenses.

For traditionalists, you’ll still receive a monthly statement, but even here Apple has added a 21st-century twist. When viewing transactions, you can click to see where you spend the money on Apple Maps.

The physical card also has unique security properties, starting with having no card number, etc., in place on the outside. Additionally, card activation is done using an iPhone and an NFC tag concealed in the card’s packaging.

Back in November 2019, Danish programmer David Heinemeier Hansson slammed Goldman Sachs on the algorithm it uses for Apple Card acceptance. In a series of tweets, Hansson provided information which he said proved the bank issuer discriminated against females during its Apple Card acceptance process. Since then, New York’s Department of Financial Services started an investigation on the claim.

A Goldman Sachs spokesperson declined to comment at the time, as did Apple, which isn’t involved in the Apple Card acceptance process.

Signing Up for Apple Card

Not surprisingly, Apple has made it very simple to apply for an Apple Card. To do so, you either fill out a quick form on the Apple website or apply through the Wallet app on your iPhone.

To apply through the app: 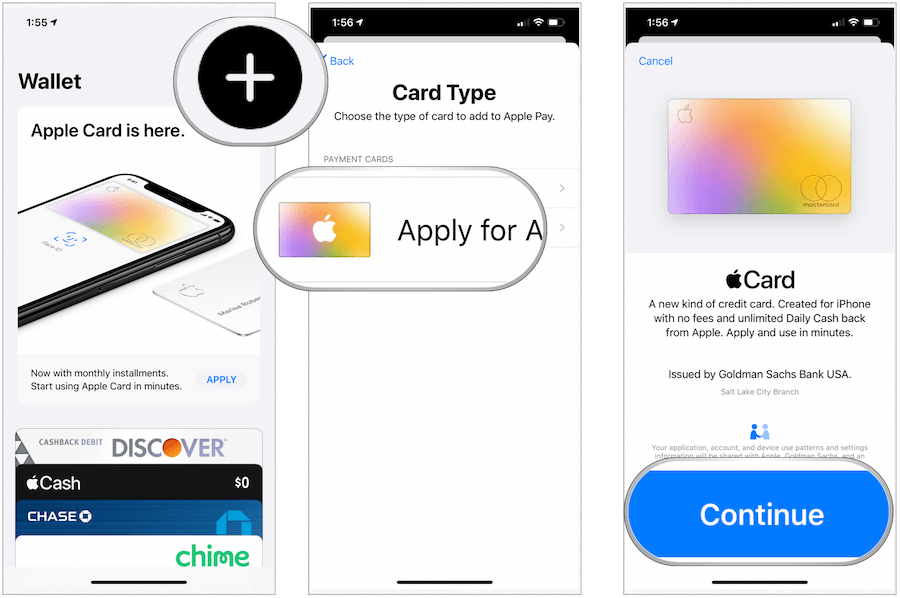 On the next screen, fill in your personal information, including your first and last name, date of birth, and email address. Follow the directions to complete the process. You’ll receive Goldman Sach’s decision after just a few seconds.

Apple Card offers lots of benefits for anyone looking for a credit card. Still, it comes with all of the headaches credit cards bring to the table for anyone who doesn’t use their credit responsibly. Keep this in mind before applying.